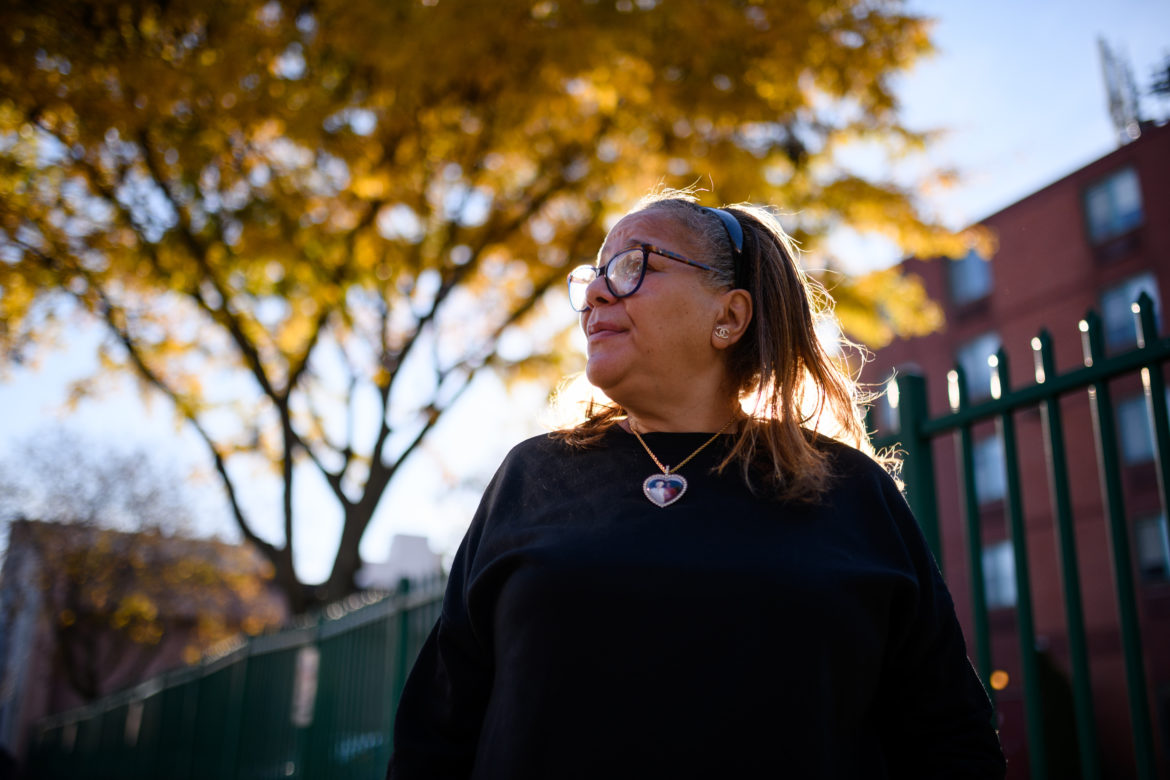 Kevina Chapolini stands on her block, down the street from her home in Philadelphia on Thursday, November 18, 2021. Chapolini accumulated $15,000 in water debt from her in-laws, the previous owners of the home. After seeking legal aid, she was able to enroll in the Tiered Assistance Program from the Philadelphia Water Department, which will allow her to wipe away that debt after two years. CREDIT: Kriston Jae Bethel

The South Philadelphia resident began to panic when she saw the city had tacked a notice on her door threatening her with legal action, back in the summer of 2021. Her husband had inherited the property from his parents in 2007, and with it, their unpaid water bill debt.

Tears traced the retired social worker’s cheeks as she recalled the memories tied to the simple rowhouse with beige siding, snugly tucked between its neighbors on a peaceful side street in the Newbold neighborhood.

Chapolini-Renwrick had lived in this neighborhood her entire life. It was where she hosted “Fried Chicken Fridays” for the hungry kids who lived on the block, and where she fell in love with her husband, Yvon Renwrick, who was her first and only boyfriend. And the house was where she said goodbye to him, when he died from cancer in the summer of 2020.

“I thought, ‘I’m going to become homeless and lose the house that my husband and I raised our children in,’” she said.

Although water bills for exorbitant sums of money – the result of years of interest – had been sent to her home for years, she never paid them, or even opened the envelopes, because they were in the name of the home’s former residents. She reasoned that she only needed to pay the bills that came in her husband’s name, which she did. Diligently.

Plus, there was so much going on in Chapolini-Renwrick’s life. Lengthy hospital visits with her husband, from dawn until dusk. And she was diagnosed with breast cancer in April 2021.

Still, Chapolini-Renwrick tried every avenue to stop from losing her home because of the water debt. The city was threatening her with legal action – potentially including selling her home at a sheriff’s auction – if she couldn’t pay up. She even called her state representative, who told her nothing could be done.

Eventually she found the nonprofit Community Legal Services in Philadelphia, where she ended up “blowing up” the voicemail of Robert Ballenger’s phone. Ballenger is part of a team at CLS who work as public advocates on utility issues.

Ballenger told Chapolini-Renwrick about a somewhat new program in Philadelphia that could help her: the Tiered Assistance Program, or TAP.

TAP is unique to Philadelphia; few city-run water utilities in the country offer anything like it. It locks water rates for people with low incomes to 2%-3% of their income, regardless of their water use. Chapolini-Renwrick is one of thousands of people who participate in the program, which came about in 2017.

“Water debt is really an issue of housing and community stabilization,” Ballenger said. “And the accumulation of water debt is one of the things that can deprive a low-income family of the value of what may be their only real asset: their home.”

In Chapolini-Renwrick’s case, TAP dropped her monthly bill to $43.30 – which ignores the amount owed on the past water bill debt. It’s a rate she said she can handle, even with her sole income being a Social Security check.

What’s an even bigger game changer for her, however, is the program also has a debt forgiveness component. If she makes 24 payments – once per month over the next two years – she will have the $15,000 wiped away completely.

“It’s a huge burden lifted off of me,” she said. “So now I’ve got time to heal, with my depression and with the breast cancer.”

Sidebar: Why compare Cleveland and Philadelphia, and why does this matter?

What can Cleveland learn from Philadelphia?

Susan Crosby, deputy revenue commissioner with the city of Philadelphia, said while the city is still studying TAP’s overall impact, it has noticed a correlation between decreased water shutoffs and customers’ participation in TAP.

Curious about the reporting that went into this project? Listen to WURD Radio’s Charles Ellison interview reporter Conor Morris about this story. WURD is Philadelphia’s only Black-owned radio station, and a member of the Resolve Philly journalism collaborative.

In order to pay for the program, there’s a small rider placed on the bills of non-TAP program participants. Philadelphia attorney Ballenger said it amounts to a “whopping” 67.5 cents per-bill on average, or about $8 per-year, per-home.

“Meanwhile, $615 a year,” Ballenger said. “That is how much a low-income water customer on average benefits by participating in TAP, with just over $50 a month on average of bill relief.”

But building out the program was a monumental undertaking, Crosby said, likely placing it out of the budget for some smaller cities. TAP’s implementation required hiring 22 full-time employees, updates to the billing system and customer service management software, and creating a marketing strategy to tell customers about the program, she said.

“Once the program is off and running, the numbers kind of bear it out, though,” Crosby said. “Most utilities are going to be able to do a cost-recovery mechanism (rider) for some or all of the costs.”

Even before that though, Ballenger said TAP required a “champion” like Councilmember Maria Quiñones Sánchez to introduce the legislation, and a city administration willing to work with City Council to create and fund new programming.

However, NEORSD spokesperson Jenn Elting said only about 1,600 people were signed up for its Sewer Affordability Program as of November 2021, and records show a similar number signed up for its water counterpart.

NEORSD is trying to increase participation in the Affordability Program, and recently announced it was expanding that program. Those efforts have borne fruit; Elting said the program added about 100 people since January 2022.

In Philadelphia, meanwhile, its discount program has hovered at an enrollment rate of around 25%, or 15,000 customers out of 60,000 potentially eligible households.

Cleveland, unlike Philadelphia, does not have a rate board, through which public advocates like Ballenger, the Philadelphia lawyer, can represent citizens’ concerns when Philadelphia Water proposes hiking its rates. It was partially through this board that the drive for the TAP program came about, Ballenger said, after the “failures” of the city’s old discount program became clear through the board. He said the old program typically left residents in more debt than they started with.

Cleveland does have a Water Review Board where people can dispute their bills, but that board seldom grants people a hearing, according to a report from the NAACP’s Legal Defense Fund.

Who would benefit in Cleveland?

Things have been challenging for Cleveland Water Department customers like Janet Gill-Cooks, whose bills for her Garfield Heights home were far outpacing her limited income back in November 2021. Gill-Cooks, a 63-year-old with COPD and degenerative arthritis, has been out of work since the beginning of the pandemic. She’s been getting by on her Social Security disability check, with some help from her children and weekly trips to local food banks.

Gill-Cooks had accrued about $600 owed on her utility bills last November, and struggled to get through to Cleveland nonprofit CHN Housing Partners – which administers state and federal utility bill assistance programs – as well as the city’s water discount program.

“It’s a really hard situation when they have these resources available, and then you can’t get through because there’s so many other people needing help,” she said.

She eventually did get some help on her sewer bill, but from a different local nonprofit – Community Housing Solutions. The rest was paid off by a former local resident who read about her story. CHN, for its part, has said it’s trying its best to help people but has limited staffing capacity; high demand for its programs; and struggles to get people to re-enroll for its programs each year.

Meanwhile, the pandemic has also presented challenges for Cleveland landlords like Thomas Ren. He owns a handful of properties in the Cleveland area, and said last November that some tenants at several of his properties simply stopped paying rent and stopped paying their utilities. It’s led to water bills as high as $10,000 at a single property for Ren.

For a rental property owner like Ren who has lost significant income during the pandemic, having a bill forgiveness component in Cleveland akin to Philadelphia’s TAP program could make a huge difference. And for single-home residents like Gill-Cooks, the price reduction based on their income would also make a big difference.

Sarah Johnson, a spokesperson for the city of Cleveland, said in an email that the city is sensitive to these concerns.

Another concern is that Cleveland’s Water Affordability program is only available to homeowners, despite roughly 50% of the city’s population living in rental homes. Philadelphia’s TAP is available to renters, but with the caveat that those customers must have the bill in their own name. Johnson said the city is monitoring NEORSD’s progress after it began allowing renters to utilize the Sewer Affordability program, to see if the city should consider a similar shift in eligibility.

Philadelphia’s TAP program isn’t without its own flaws, though. You can learn more about the gaps in that program, and what Philadelphia can learn from Cleveland, in the next part of this series. [Editor's note: a link will go here when the next part is published.]

This story is a part of the Northeast Ohio Solutions Journalism Collaborative’s Making Ends Meet project. NEO SoJo is composed of 18-plus Northeast Ohio news outlets including Eye on Ohio, which covers the whole state. Conor Morris is a corps member with Report for America. Email him at cmorris40@gmail.com. Or emails us at info@eyeonohio.com.

A tale of two cities’ water bills: how one place was able to reduce mounting utility costs for low-income households and how Ohio may follow suit