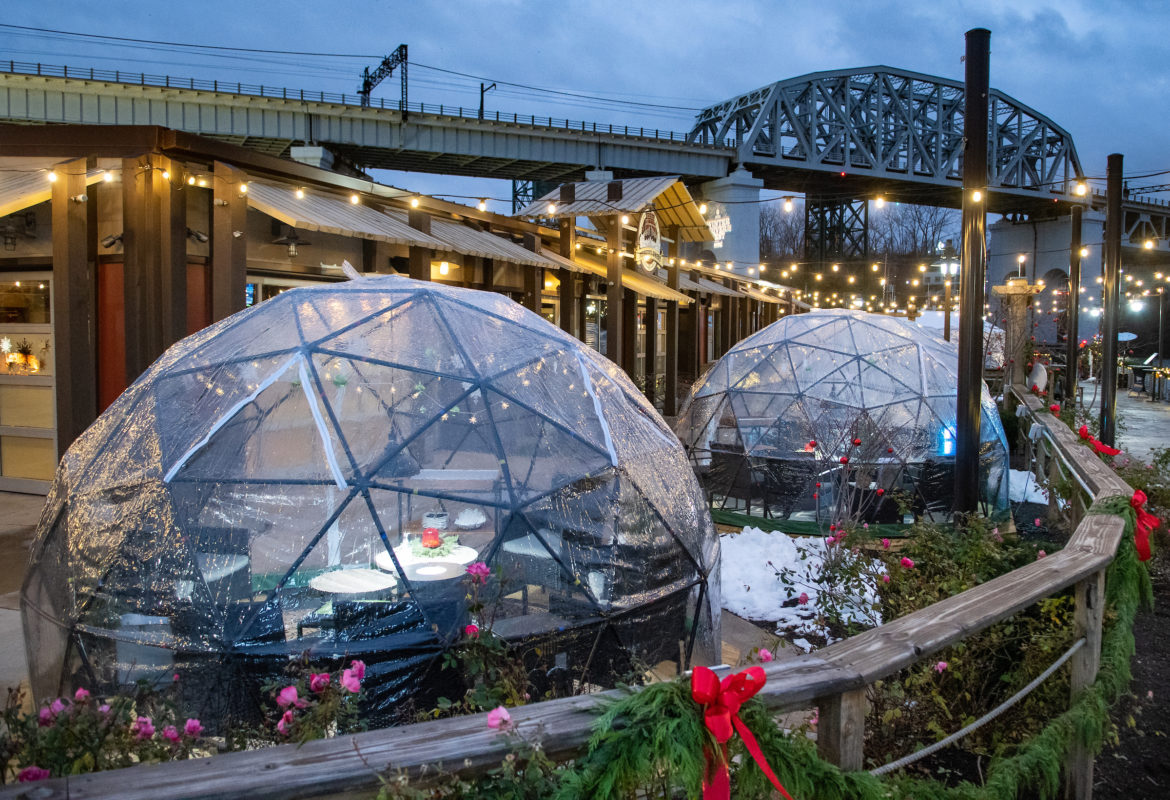 At the Academy Tavern in Cleveland last week, Missy and Wilson Heller shared a table but not a comfort level.

“I’m freaked out,” Missy said about eating out during the pandemic.

“It’s all overblown,” Wilson said about the danger.

In a secluded corner, Corazetta Jackson said the Academy’s staff seemed to be following all the rules for hygiene. “I feel very safe.”

But many other diners are speaking at local restaurants this year by their absences. With COVID-19 spreading fast, patio temperatures plummeting, companies canceling holiday parties, fans watching big games at home, officials announcing a 10 p.m. curfew and stay-at-home advisories, many of those restaurateurs still in business say they may not manage to weather the winter without more support.

“If our federal government doesn’t do something to help restaurants, these next few months are going to be terrifying,” said Nolan Konkoski, who closed West 25th Street’s Soho for eight months, then revamped his menu and reopened in November as Chicken Run just for pickups. “We’ll see closures on top of closures.”

In October, Scene Magazine reported that 40 Greater Cleveland restaurants had closed for good so far this year, including stalwarts like Lola, Fire, Spice, Washington Place, Tastebuds, Sokolowski’s University Inn, and XO Prime Steaks. Many others have closed for now, including Market Garden, Happy Dog, and Porco.

Many remain open with fewer hours, workers and dishes than before. All have reduced seats per state orders to keep parties six feet apart. Many have eliminated seats entirely, cooking food just for takeout and delivery, which are much more popular now than dining out.

Then again, 10 new restaurants opened downtown during the year’s third quarter, from Ujerk to the Sixth City Sailors Club to a branch of Sauce Boiling Seafood Express, according to the Downtown Cleveland Alliance. Last month, Shaker Square welcomed the haute Edwins Too, with price-fixe meals of up to seven courses.

Industry statistics vary widely, depending on who’s counting and how, but they’re all grim. The U.S. Bureau of Labor Statistics says that 13.8% of the nation’s 10.2 million food and beverage workers were unemployed last month. That’s way down from a peak of 35.4% in April, when Ohio and other states closed dining rooms, but still way up from last November’s 4.8%. The National Restaurant Association says the trade is likely to lose more than $240 billion this year. An Ohio Restaurant Association survey found that 60% of the state’s proprietors might close for good if current conditions last much longer.

According to a report by Rust Belt Analytica and Cleveland State University, the city lost 26.6% of its hospitality and leisure jobs during the 12 months ending in September. Revenue at local restaurants and hotels fell 58% from January through September. The numbers of small local businesses in hospitality or leisure fell 39.1%.

“No sector has been impacted like the culinary and performing arts,” the report says. “The closing of our neighborhood anchors means a sanitization of the city’s character.”

Restaurants haven’t slumped for lack of effort. “Owners are entrepreneurs,” says spokeswoman Homa Moheimani of the Ohio Restaurant Association, whose 100th year has been far from festive. “They’re creative. They’re going to do everything they can.”

They’re served up kits of raw ingredients along with virtual cooking lessons. They’re turning waitresses and bartenders into delivery drivers. They’re selling baskets of treats for companies to dole out in lieu of holiday parties. Mallorca is selling takeout meals for New Year’s Eve, with carnival masks instead of hygienic ones.

Restaurateurs say customers are helping out as best they can. Denise Kramer, marketing director for Zack Bruell’s restaurants and president of the Cleveland Restaurant Association, says, “People are really trying to support all the Cleveland independent restaurants.”

Chicken Run’s Konkoski says customers tend to tip more lately for takeout than they used to, though still not nearly as much as for table service. And some customers are still braving patios in December.

Owner Chris Butler of the Academy says he’s managed to heat his three igloos to nearly 70 degrees so far. He reserves them for two hours per visit, with gaps of at least 30 minutes to sanitize. “They’ve been popular and easy to maintain and turn over and keep sterilized.”

Despite closing Market Garden and his four other restaurants on West 25th for now, Sam McNulty says, “It’s been wonderful to see Clevelanders embrace apres-ski culture. It’s healthier and happier for all of us.”

Help wanted by workers and owners

Many restaurateurs say they’ve gotten vital help from their landlords and Cleveland. City Council put a temporary cap on delivery services' surcharges to restaurants of 15% of a customer's bills. The administration is giving $5,000 grants to restaurants to equip their grounds for winter dining. It has also authorized temporary “parklets”—public parking spaces turned into dining spots.

Many local restaurateurs have banded together in a movement they’re calling #WeCantClose. They’re asking Governor DeWine to keep restaurants open, pledging to follow regulations, and kicking out members who violate them.

The National Restaurant Association is asking Congress to revive and improve the Paycheck Protection Program, partly by making its loans deductible. They’re also seeking a Restaurant Recovery Fund. They’re seeking relief for payroll taxes. They’re lobbying to expand eligibility for the Supplemental Nutrition Assistance Program. They’re lobbying for food workers to be given some priority for vaccinations.

Vicki Frazer, a long-time bartender laid off from Thistledown Racetrack and Casino, says workers deserve special help. “We've seen what has happened with the large industry bailouts. The CEO's and stockholders benefit, but the workers don't.”

The report by Rust Belt Analytica and Cleveland State urges officials “to help the culinary and performing arts scene not only survive in the short-term, but thrive in the longer-term. This means significant public investment to keep the lights on and the seats warm until our new normal becomes normal again.”

Studies have shown increased spread of COVID-19 at restaurants. But proprietors said they have taken extra steps to make sure restaurants are regularly sanitized. Owner Laurie Torres of Mallorca said, “Who knows when Uncle Earl last cleaned his kitchen?”

The fortunes of different restaurants are as varied as their menus. Carl Robson says the hygienic measures at his Empress Taytu on St. Clair have hardly mattered. “We haven’t had enough people here to catch anything, anyway.”

Owner Senayt Fekadu says business has bounced back somewhat at her Crispy Chick on Woodland but remains just half of what it was before the pandemic. “I’m saying a prayer and hoping I can tough it out.”

Some owners say the statewide curfew and the local stay-at-home advisories amount to shutdowns. “Most people hear ‘Stay at home’ and do just that,” says McNulty. He’d spent some quarter of a million dollars making his places on West 25th Street safer, only to close them because of Cleveland’s advisory, set to expire New Year’s Eve; Cuyahoga County’s, set to expire this Thursday; and the state’s 10 p.m. curfew, set to expire Jan. 2. He has furloughed all but 30 of his more than 200 workers, keeping the rest to make beer for retail and wholesale customers.

Early on, the Cleveland Metroparks closed some of its restaurants for the pandemic. Through October, sales of food were down 75% year to date.

But revenues, jobs, and square footage are growing at the Edwins Leadership and Restaurant Institute complex, where ex-felons create everything from haute cuisine to institutional meals. “I’m diversifying as much as I can,” says leader Brandon Chrostowski, “feeding everyone everywhere all the time.”

Hanging on and hoping

Like other entrepreneurs, restaurateurs hope for better days as vaccinations spread. “Things should steadily improve,” says Michael Deemer, executive vice president of Downtown Cleveland Alliance. “The challenge is to get through the next several months.”

Besides, she says, “People love to gather. It’s part of our life and culture and humanity.”

Despite the pandemic, residential and commercial buildings keep rising in restaurant districts. “I’m very bullish on Ohio City,” says McNulty. “Downtown is going to take longer to return to vitality, but downtown is not going out of business. We’re social creatures.... The minute we’re able to hug our family and friends and go out and share good times, there’s no doubt we’re going to get right back to it.”

This story is sponsored by the Northeast Ohio Solutions Journalism Collaborative, which is composed of 20-plus Northeast Ohio news outlets, including Eye on Ohio, which covers the whole state.

Ohio restaurateurs hope winter and COVID won’t kill them off