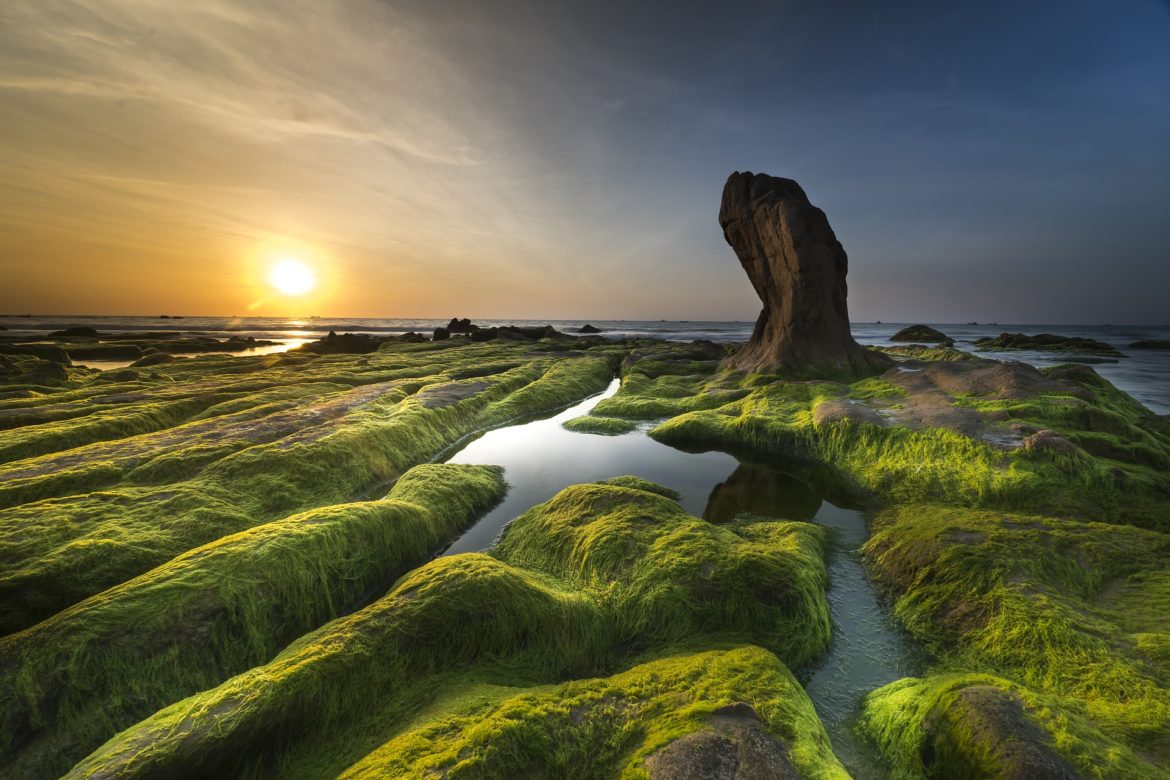 Known as harmful algal blooms, the deep green ooze grows by the mile each year, fed by phosphorus-rich runoff from farm fields. Though not always toxic, the eyesores gunk up beaches, choke marine life, and became far more serious in August 2014.

That’s when Toledo’s water system sucked up cyanobacteria (known as blue-green algae, though it’s technically not algae) and contaminated drinking water with microcystin, a toxin that can cause liver and kidney damage. The scare prompted residents to rely on bottled water for three days and cost about $65 million, mostly in lost tax revenue and tourism.

Though there’s been no repeat water emergency, the blooms continue to grow and climate change may make them more frequent and intense.

True to form, this summer’s bloom started earlier than normal due to warmer waters.

Experts predict it will be smaller than last year’s — the third-largest ever recorded — but bigger than in 2016. (The National Oceanic and Atmospheric Administration’s Great Lakes Laboratory offers twice-weekly bloom bulletins here.)

What has changed since the Toledo scare? And what shapes an algal bloom?

John Bratton is a senior scientist and geologist at LimnoTech, an environmental engineering firm based in Ann Arbor. 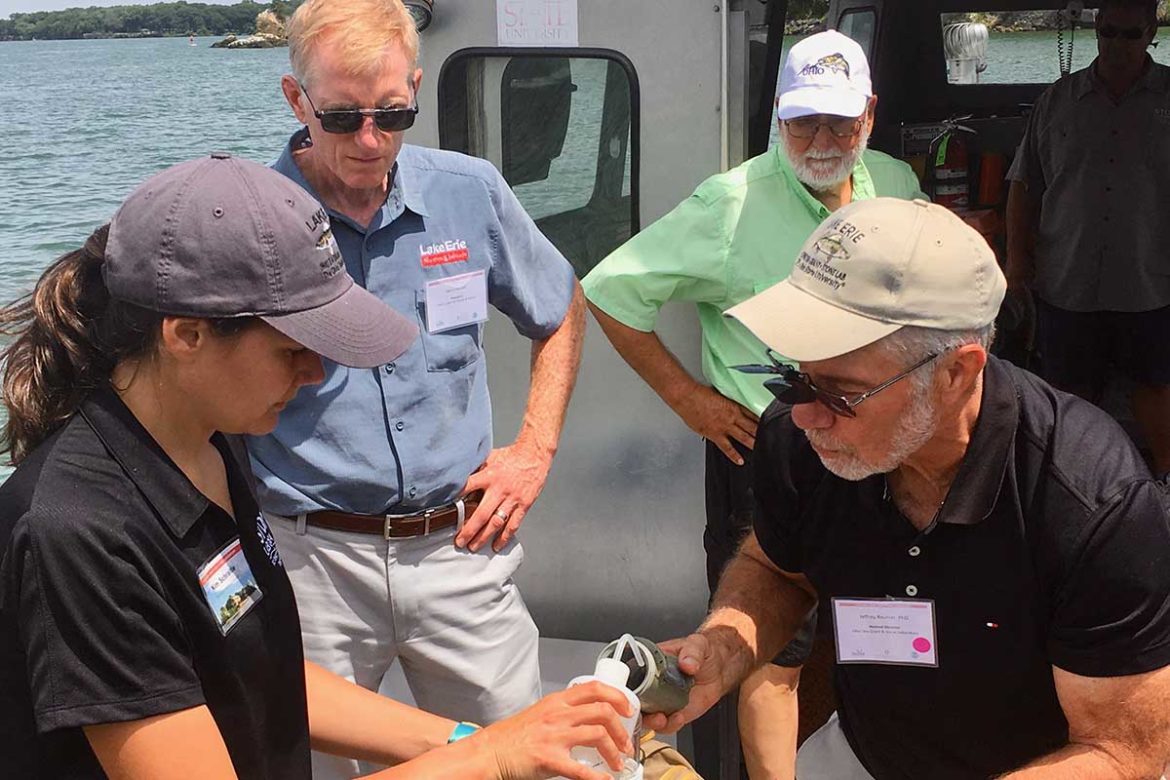 The conversation has been edited for length and clarity.

Malewitz: Is it fair to call the Toledo episode a wakeup call?

Bratton: That incident focused attention and made resources available that weren’t there before — to invest in plant upgrades to invest in research. That’s the silver lining of a bad event. There were small facilities that had toxin problems in prior years — 2,000 customers instead of 400,000 customers. Those were warning shots that didn’t get the same attention.

Malewitz: In the 1970s, officials thought they had solved what had been a growing algal bloom problem after the federal Clean Water Act spurred limits on discharges from water treatment plants and phosphorus was eliminated from laundry detergents that had ended up in Lake Erie. Why did the blooms start growing again in the 1990s?

Malewitz: So looking at the total amount of phosphorus in a lake doesn’t tell you much?

Bratton: They used to do these forecasts based upon total phosphorus. Now, if you listen closely, researchers talk about “bioavailable phosphorus.” But in terms of total acres of land farmed today versus decades ago, it’s almost the same. Total phosphorus applied is either the same or less in most cases. Crop yields have gone up, not because farmers are applying more fertilizer, but because of better engineered strains of corn or soybeans.

Malewitz: Does this type of nuance — they idea that total phosphorus loads only tell you part of the story — muddle the political debate about how to fight algal blooms, particularly when the agriculture industry argues against more regulations?

Bratton: There’s a temptation of some in the agriculture sector to quantify their actions without translating them into impact. They’ll say, “We’ve changed our tillage practices and there’s less erosion. We’ve prevented so many pounds of sediment from entering the lake.” All of that is true. But to get the full picture, we’ve also got to acknowledge this has sent more dissolved phosphorus in the lake. At the end of the day, if there’s more algal blooms, the problem’s not solved.

Malewitz: Why is more dissolved phosphorus entering the lake?

Bratton: There are three primary contributors: One is more spring runoff, total volume of flow into the lake has increased over the past decade. And less tilling of farmlands yields more dissolved phosphorus in two ways: If you apply fertilizer but don’t till it in, rains more easily wash it off. And if you don’t till the soil on a regular basis, you form macropores, little pipes down into the soil.

Malewitz: This doesn’t mean farmers should start tilling again, right? But what other actions could they take?

Bratton: You really have to look at the whole system in an integrated way. If we’re not going to till as aggressively, you can’t just sprinkle fertilizer on the surface. We still need to find a way to incorporate it without tilling. Different types of tools will actually drill the phosphorus in (without creating pores that allow phosphorus to easily wash into the water.)

Malewitz: What other factors encourage blooms?

Bratton: Not every part of the Great Lakes has blooms. Usually you have a high-yield ag area that’s heavily ditched, drained, tiled and used to be a swamp. And you couldn’t farm a swamp, so people who settled in these areas had to drain it. The Maumee Basin (Ohio’s watershed that feeds Lake Erie), the Saginaw Basin (around Lake Huron along Michigan’s thumb), parts of the Fox River Basin (around Green Bay, Wisc.) were extensively drained and trenched, dropped the water table by two, three, four feet or more. That made them farmable, but the downside is that all the nutrients trapped in those systems — whatever was lost from the fields — short-circuited into the lakes. And the waters are generally shallow, warm, sluggish and have longer retention time.

Malewitz: You mentioned the Saginaw Bay. How do algae issues there compare to what’s going on in Lake Erie?

Bratton: Similar principles apply, but the impacts are less because there are fewer people. You don’t have a Toledo up there. The Saginaw Bay does have a lot of problems with macro algae — call it muck — washing up on beaches.

Malewitz: Does the muck problem reach beyond aesthetics?

Bratton: Yeah, and it can be a health issue. Sometimes it carries different pathogens that multiply.

Malewitz: And what about cyanobacteria in the Saginaw Bay?

Bratton: They have that up there. It’s just not as much of a threat. Some of those drinking water plants take their raw water out of the river rather than the lake.

Malewitz: Do you think Gov. Kasich’s executive order in Ohio holds promise for cracking down on Lake Erie’s blooms?

Bratton: The politics are complex. Any movement toward greater support for greater conservation practices or requirements — banning something that’s harmful — is a step in the right direction. Requiring nutrient management plans will be helpful, even if it doesn’t solve all problems immediately.

This article originally appeared in Bridge Magazine, Michigan's Institute for Nonprofit News affiliate. It was republished as part of the Amplify News Project.

Q & A: Why is Lake Erie’s algae bloom growing again?