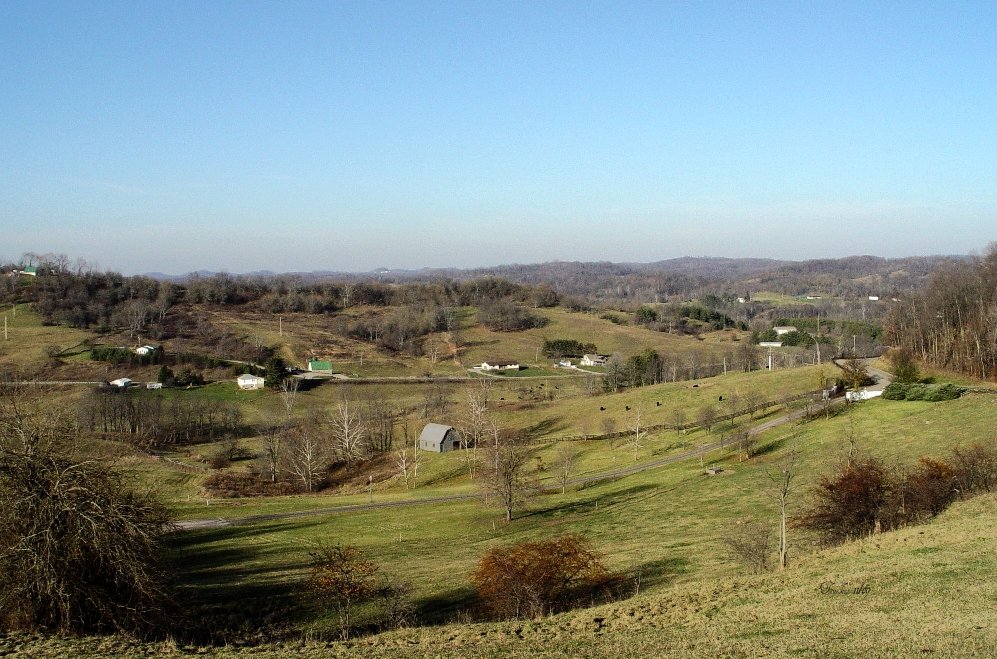 Noble County, in Appalachian Ohio, was among the counties with the highest unemployment rates in the state as the pandemic struck.

As the novel coronavirus spread, Appalachian Ohio saw the state’s highest percentages of people out of work.

As the statewide unemployment rate moved from 4.7% in February to 5.6% in March, counties in Appalachian Ohio also saw rates twice as high — up to 12.2% in Monroe County. The six counties with the highest percentages of people out of work in March were all in the state’s Appalachian region.

Job security has been an ongoing concern for coal miners and their communities, and the coronavirus pandemic has made matters worse. As of April, the U.S. coal industry had lost one in seven jobs since January, when doctors diagnosed the first U.S. case of COVID-19.

“Anywhere in the country where the economy was already struggling or in free fall, like in coal country, the pandemic is only making things worse,” said economist Jon Erickson at the University of Vermont, where his research focuses on resilience. Unlike other job sectors, “there’s no option to work from home.”

“Lower production reflects declining demand for coal in the electric power sector, lower demand for U.S. exports, and a number of coal mines that have been idled for extended periods as a result of COVID-19,” the EIA report said.

The industry has struggled to compete with natural gas from fracking. Meanwhile, the levelized cost of new solar or wind generation is now cheaper than the marginal cost to keep most coal-fired power plants running, according to a 2019 analysis by Energy Innovation & Technology and Vibrant Clean Energy.

More U.S. coal miners have been out of work, at least temporarily, since the COVID-19 crisis began. All or part of five mines in Virginia announced shutdowns because of the virus at the end of March, indicating they would fill existing orders from stockpiles. Around that time, Consol Energy shut down a mine in West Virginia after workers came down with the virus.

“It’s almost every day somebody calls us and says, ‘We’re shutting down for three weeks,’” Assistant Secretary of Labor for Mines Safety and Health David Zatezalo said during a stakeholder call last month. The U.S. Mines Safety and Health Administration even keeps a list of shut-down coal mines, although that list wasn’t publicly available as of last month, S&P Global reported.

AES’s decision to close the plants led to a loss of not only the 370 direct jobs at those plants, but also to the equivalent of about 760 additional full-time jobs in other industries, Ohio University policy analyst Gilbert Michaud and colleagues reported last year in the academic journal Regional Science Policy & Practice. More than 70% of the $8.5 million in lost local government tax revenues would have gone to schools and children’s services, according to the team’s estimates.

Bev Reed is a sales associate and mechanic at the Bridgeport, Ohio, bike shop her parents opened in 1973. The town is in Belmont County, which has a long history of coal mining and is now part of Ohio’s shale gas region. In some places rivulets of water run yellow, due to acid mine drainage, she noted. Beyond that, Reed said, many of her contemporaries who also went to college have since moved away.

“A lot of the population here in the county is middle-aged and older,” she said, noting that many young people search for jobs elsewhere. “No one stays hardly. There’s really not much opportunity if you want a good-paying job.”

“The state legislature has done nothing to help these communities or to prepare these communities,” said Waggoner. “It’s like they’ve” — lawmakers — “had their head in the sand while the world has moved beyond them. And we’ve only seen plant retirements speeding up and the economics of coal plants getting worse.”

Bailouts like Ohio House Bill 6 won’t do much to help workers in the long term, Waggoner said, despite the law’s short-term subsidies for two 1950s-era coal-fired power plants. In his view, there must be “real supports to the communities to provide a future for them beyond coal and coal plants.”

To be sure, the pandemic is “intensifying preexisting problems and making them worse” across a wide range of sectors, said political scientist Anthony DiMaggio at Lehigh University. But it also seems to be sparking widespread support for addressing social justice problems as the country emerges from the crisis.

More than three-fourths of those answering a nationwide survey by the Harris Poll for the university felt it was very important or somewhat important for the U.S. government to commit to reducing inequality. The results of the April 2020 poll didn’t break out the data for rural locales. However, “the support for government taking action is so widespread, you’d have to say it would include people in those areas,” DiMaggio said.

“So the question for the [COVID-19] stimulus is how do we invest away from a dying industry and toward the industries of the 21st century,” Erickson said. “And most importantly, how do we do this in a way that doesn’t leave rural America, like coal country, behind?”

“We’ve invested in everything except resilience,” Erickson continued. For a community, that means it can “take a hit, that it can take a shot, and come back stronger than ever.”

Support for people in Ohio’s coal country could take a variety of forms, Waggoner said, such as jobs training or supporting new generation or manufacturing for the renewable sector. Basic infrastructure is also crucial to make rural areas more attractive to other employers, he said. High-speed internet isn’t available in many parts of rural Ohio, for example.

Just as the 1936 Rural Electrification Act provided a major stimulus during the Great Depression of the last century, “we now need a 21st century renewable rural electrification program,” Erickson said. Details would need to be worked out, he said, but would likely include major investments supported by public policy actions, to encourage clean energy job growth in rural areas.

Even as the Energy Information Administration forecasts that total U.S. electricity generation will fall by 3% this year, the agency expects 11% growth in renewable generation this year. That’s an optimistic outlook, even after the agency’s downward adjustments of 5% and 10% from its previous estimates this spring.

The southwestern counties in Ohio’s Appalachian region offer relatively good solar resources compared to many other parts of the PJM grid region, Michaud noted. Several projects are already planned for the area.

The next steps will depend on what policymakers, community leaders and voters do in the coming months. Erickson feels people impacted by coal’s decline should “organize, organize, organize” to demand meaningful help and hold government leaders accountable.

This story from the Energy News Network was published as part of the Amplify Project at the Institute for Nonprofit News.