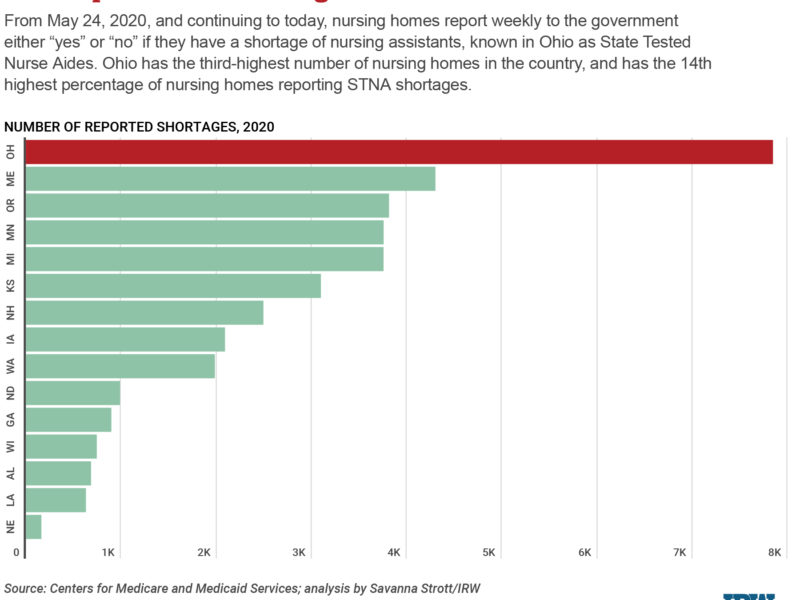 This story is from the Investigative Reporting Workshop in collaboration with Eye on Ohio, the nonprofit, nonpartisan Ohio Center for Journalism. Please join Eye on Ohio’s free mailing list or follow IRW on Facebook as this helps us provide more public service reporting. Ohio nursing homes reported more shortages of nursing assistants than any other state during the pandemic, highlighting a problem that has been festering for decades.

Ohio has the third highest number of nursing homes behind Texas and California, and tallied STNA shortages in 26% of reports to the Centers for Medicare and Medicaid services (CMS). That makes Ohio the 14th worst nationwide for the percentage of nursing homes reporting too few STNAs that same year. “We just have probably the worst shortage that we've had at least in my 35 years of doing this,” said Robert Applebaum, director of the Ohio Long-Term Care Research Project at Miami University’s Scripps Gerontology Center.

SIDE BAR: The long road for nursing home legislation in the Statehouse 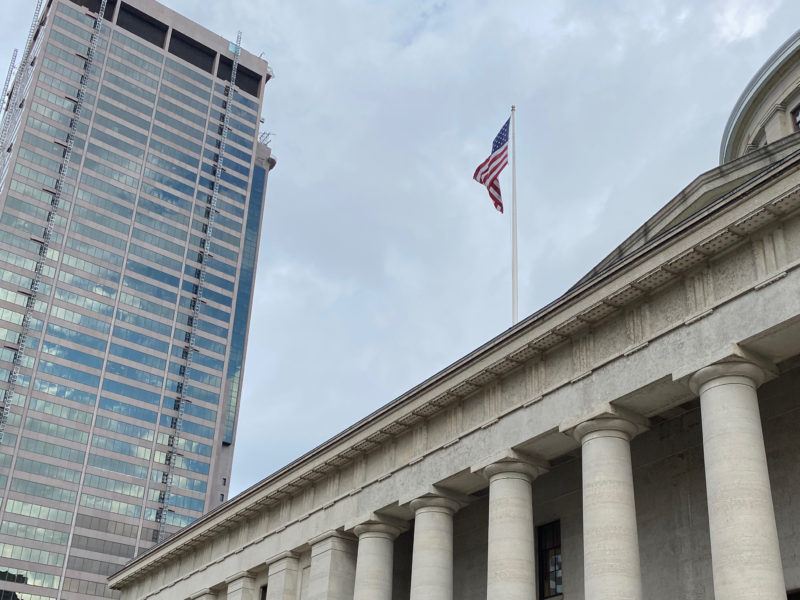 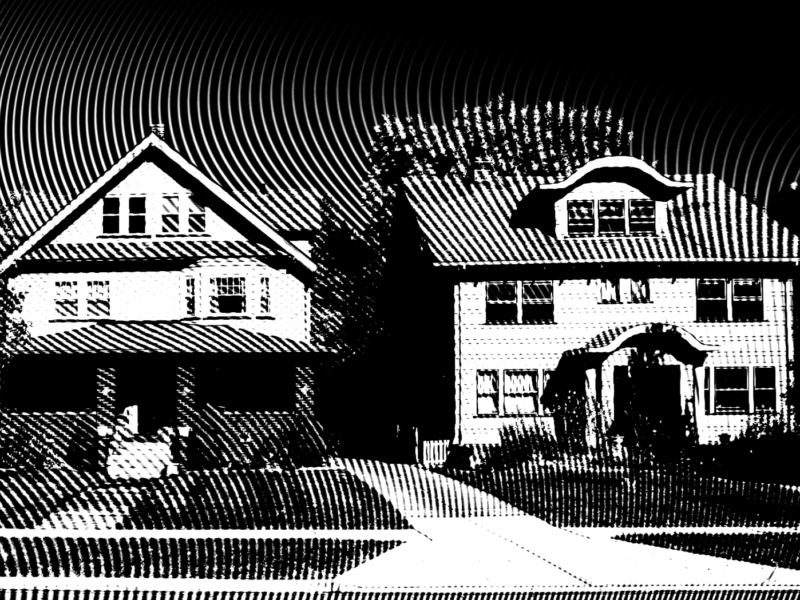 How one Ohio city lowered evictions and late rental payments 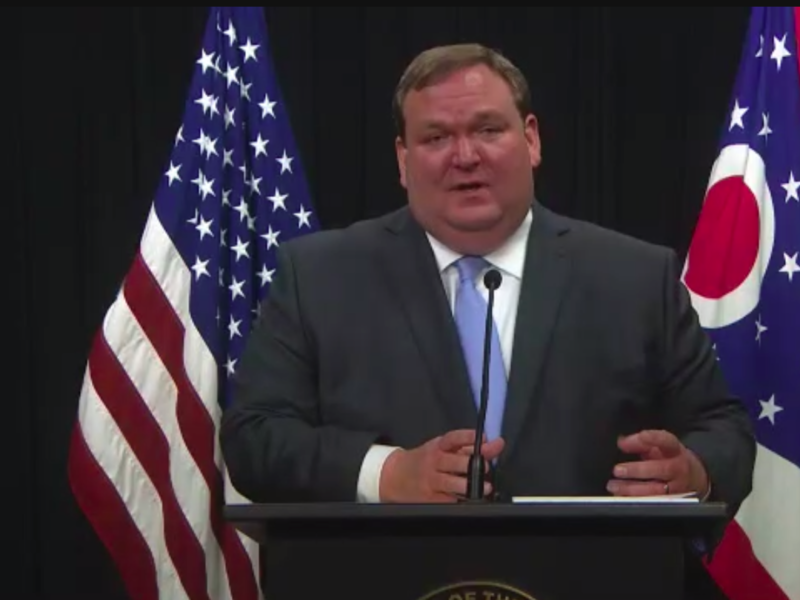 Do you owe ODJFS because of a Pandemic Unemployment Assistance overpayment? You might be eligible for a waiver

In the early months of the pandemic, Cleveland Councilwoman Jasmin Santana, who represents a West Side ward with the densest population of Latinos in the city, said health department officials reassured her that when the city released urgent health updates, they would be translated into Spanish.

The city put out public releases, sometimes daily, as the pandemic evolved – about safety precautions, work restrictions, and how many people were infected with the virus – but the information didn’t seem to make its way to the Spanish-speaking residents in Santana’s ward, where close to 40% of residents are Hispanic.

When she pressed again, this time with city communications officials, Santana said she was told the city didn’t have resources for translation.

One high-ranking city official suggested Santana and her office should create Spanish-language versions to distribute, she said.

The reaction startled her.

“I almost didn’t know how to respond,” Santana said. “That's when I started really realizing, ‘You know what? This is a huge issue for the city.’ Who would have thought that a city with more than 300,000 residents wouldn’t be ready to have their communications translated?”

(A city spokesperson did respond to questions about what Santana was told.)

Santana’s concerns as a councilwoman were rooted in what she’d witnessed growing up in her community and later as a health outreach worker: that language and trust act as barriers to resources that can improve or save lives. The COVID-19 pandemic has intensified pressure on a chronically underfunded public health system that already faced staggering disparities in access to medical care and health outcomes, especially for people with limited English proficiency.

But the crisis also has offered an opportunity, which some local health departments have embraced, to forge relationships and connections that could outlast the virus.

Cleveland, a city that declared racism a public health crisis almost a year ago, with officials vowing to tackle disparities and inequities, has seen some progress but it has been sluggish.

Despite a windfall in pandemic aid, Cleveland still has not beefed up its own contract tracing operations by adding bilingual staff. Instead, it has relied on the state health department for virtual assistance with Spanish-speaking residents and a language translation line.

This article is from Eye on Ohio, the nonprofit, nonpartisan Ohio Center for Journalism. Please join their free mailing list, as this helps provide more public service reporting. For women survivors of sex trafficking struggling to make ends meet, the COVID-19 pandemic has exacerbated an already desperate situation. Funding programs to support them have shifted to more urgent crisis funding— to house and feed the homeless, for example. Losing financial and food security only places these already scuffling women at an even greater risk of being trafficked again to earn money just to survive.

This article provided by Eye on Ohio, the nonprofit, nonpartisan Ohio Center for Journalism in partnership with the Buckeye Flame. Please join our free mailing list or the mailing list for the Flame as this helps us provide more public service reporting. After beginning with some vocal stretches to warm up her voicebox, Ginger Williams hums and vocalizes to match a tone played by Maureen Brogan, a student clinician. “Good! I got 195,” Maureen reports.

“Yes!” Ginger whispers, her excitement quiet but palpable even over video conference. Her 195 signifies “195 hertz,” which falls nicely into the 180-240 range associated with a female pitch.

For Ginger, a transgender woman, this result is exactly what she is here to achieve.

More help is on the way, but will it be enough? This article is from Eye on Ohio, the nonprofit, nonpartisan Ohio Center for Journalism. Please join theirfree mailing list, as this helps provide more public service reporting. Janet Cook’s utility bills are stacking up and she doesn’t have enough money to pay them. The 62-year-old Clevelander’s main source of income is monthly Social Security disability checks.

This article is from Eye on Ohio, the nonprofit, nonpartisan Ohio Center for Journalism. Please join their free mailing list, as this helps provide more public service reporting. Amid a raging pandemic, Ohio’s agency responsible for looking out for workers’ welfare has started posting full-time temporary jobs with no benefits for its own workforce.

For example, this week the Ohio Department of Job and Family Services (ODJFS) sought to hire an “electronic design specialist,” a job that requires a bachelor’s degree, years of experience, or some combination of both. The hours listed are full time, with a schedule that is “not negotiable” and the position is “not eligible” for benefits.

As total COVID-19 cases in the state soared to nearly 600,000 and deaths rose to almost 8,000, Eye on Ohio asked why the positions are listed without medical benefits when large employers have to give most of their workforce— even temporary workers— medical insurance eventually under the Affordable Care Act, or pay a penalty.

A spokesman for ODJFS said “Benefit eligibility under the ACA for temporary or part-time positions is determined based on the length of time employed and hours worked during that period of time.”

Eye on Ohio further inquired if the positions have a set end date and why officials listed positions with no health care as the chances of getting a debilitating disease have risen. Officials did not respond to multiple requests to comment.

Each job posting begins with, “The Ohio Department of Job and Family Services’ mission is to improve the well-being of Ohio's workforce and families by promoting economic self-sufficiency and ensuring the safety of Ohio's most vulnerable citizens.”

But it’s not clear if ODJFS’ own workers could be self-sufficient with its own positions: according to Heatlhcare.gov, a monthly premium for a nonsmoking family of four in Columbus is approximately $810. That’s about 24% of what an ODJFS electronic design would make after taxes.

Ohio juvenile court Judge Timothy Grendell thought coronavirus precautions were overblown, and made sure people knew it. In one case he forbade a mother from getting her children tested for COVID-19. Then, one of them had to go to the emergency room. ProPublica is a nonprofit newsroom that investigates abuses of power. Sign up to receive our biggest stories as soon as they’re published.

A Cold Covid Christmas in Cleveland

This article provided by Eye on Ohio, the nonprofit, nonpartisan Ohio Center for Journalism. Please join our free mailing list as this helps us provide more public service reporting. CLEVELAND, Ohio – The needs of Greater Clevelanders have come in waves during the pandemic, much like the virus itself: first food, then rent, then internet so students could learn from home.

Now, as moratoriums that staved off utility disconnections cascade to an end, some families face a long winter unsure how they will keep the lights, heat and water on. Moratoriums on shut-offs with Cleveland Public Power and the Cleveland Water Department, for example, ends tomorrow, Tuesday, Dec.

This article provided by Eye on Ohio, the nonprofit, nonpartisan Ohio Center for Journalism. Please join our free mailing list as this helps us provide more public service reporting. Despite an October 20 court order issued by the Ohio Court of Claims, the Ohio Department of Health still had not released complete records as of late Wednesday night, claiming they needed several days to release information from a database that is updated daily. During Ohio Governor Mike DeWine’s November 17 press conference, Governor DeWine said that the information with the current number of beds, ventilators, and other medical equipment available for each Ohio hospital will be released on a daily basis. “There is no reason why we can’t release that that I am aware of,” DeWine said.

This article provided by Eye on Ohio, the nonprofit, nonpartisan Ohio Center for Journalism. Please join our free mailing list as this helps us provide more public service reporting. As the ongoing pandemic continues to surge, the Ohio Court of Claims ruled last week that the Department of Health must share public records with Eye on Ohio, showing the number of beds and ventilators available for COVID-19 patients at individual hospitals throughout the state.

The ruling comes seven months after Eye on Ohio initially sought the records.

“In times of crisis transparency is paramount,” said Rebekah Crawford, who has her Ph.D. in Health Communication, Relating & Organizing from Ohio University. People want credibility and clear lines around what is known and what is uncertain. “When risk communicators are at their best,” Crawford said, “they remain credible by showing what is known and what is not known and by being clear about why we don’t know, and what we’re going to do to find out.”

When Eye on Ohio first requested records, at the end of March, the state had only about 2,200 confirmed cases and 55 deaths, according to the online Johns Hopkins Coronavirus Resource Center.