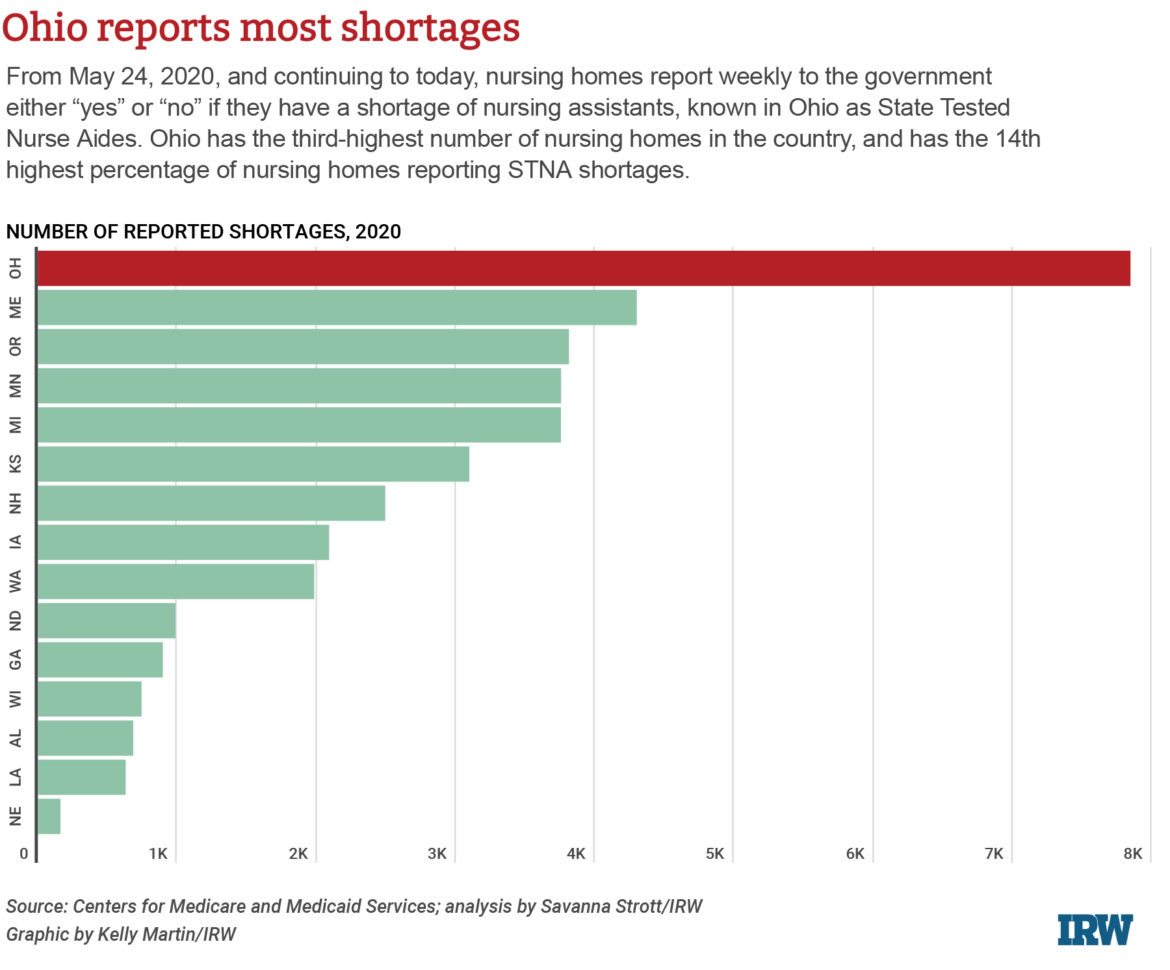 This story is from the Investigative Reporting Workshop in collaboration with Eye on Ohio, the nonprofit, nonpartisan Ohio Center for Journalism. Please join Eye on Ohio’s free mailing list or follow IRW on Facebook as this helps us provide more public service reporting.

Ohio nursing homes reported more shortages of nursing assistants than any other state during the pandemic, highlighting a problem that has been festering for decades.

Ohio has the third highest number of nursing homes behind Texas and California, and tallied STNA shortages in 26% of reports to the Centers for Medicare and Medicaid services (CMS). That makes Ohio the 14th worst nationwide for the percentage of nursing homes reporting too few STNAs that same year.

“We just have probably the worst shortage that we've had at least in my 35 years of doing this,” said Robert Applebaum, director of the Ohio Long-Term Care Research Project at Miami University’s Scripps Gerontology Center. “The industry was in trouble before COVID, and COVID has pretty much put those problems on steroids at this point.”

The continuing shortage of nursing assistants, registered nurses and other staff in nursing homes has become a national issue. A June survey from the American Health Care Association and National Center for Assisted Living, which represents more than 14,000 U.S. nursing homes and long term care facilities, found that 94% of nursing homes reported a shortage of staff in the last month. Almost three-quarters of nursing homes said their workforce situation had worsened since 2020.

Quantifying shortages can be difficult because there’s no minimum staffing ratios for STNAs on the federal or Ohio state level. But staffing challenges in Ohio’s 950 nursing homes were a troublesome issue before nursing homes and other long-term care facilities accounted for almost 40% of Ohio’s 20,500 COVID-19 deaths, according to interviews with experts, advocates and nursing home administrators.

With Ohio having the 17th oldest population in the country, the need for elder care — and the workers who provide it — will only grow in the coming years.

“By not raising the wages, by not having better staffing ratios in place, you didn't create an optimal work environment,” said Monica Moran, a former organizer and lobbyist for nursing home workers with Service Employees International Union. “And so without creating that best work environment, you have less people interested in working there. And if less people are interested in working there, you have a perfect storm for the pandemic to do even more damage.”

Some studies during the pandemic found that nursing homes with higher staffing levels were associated with fewer COVID-19 cases and deaths.

But nursing home administrators who spoke with Eye on Ohio and IRW said their residents wouldn’t have fared any better even if there had been no staff shortages during the pandemic.

“What I think it was was a new virus that no one knew anything about,” said Mary Jane Klarich, administrator of the Normandy Care Center in the Cleveland suburb of Rocky River. “The shortage didn’t affect care, the number of cases or deaths. Everyone was learning and trying to get directions from the CDC.”

Now nursing homes face the threat of the delta variant, which is causing a surge in cases and hospitalizations, mostly among the unvaccinated. This, coupled with only 53% of staff being vaccinated, has created concerns about  vulnerable elderly residents. However, a Canton assisted living facility recently showed that a delta variant outbreak can be manageable and mild with vaccinated residents and staff.

Still, an incoming federal mandate requiring all staff in nursing homes to be vaccinated is causing concerns that it might worsen the already staggering staffing shortages in Ohio.

“The same challenges that created pain points during the height of the pandemic are the same areas that we will need continued improvement,” said Latoya Peterson, the associate state director for Ohio’s AARP. “That means meaningful reform around both infection control and staffing in nursing homes, and that includes common-sense legislation.”

That decline came to a head during the pandemic as Ohio’s reported shortages remained above the nation.

“The workforce challenges predated the pandemic,” Peterson said. “But they became untenable during the pandemic.”

Defining a shortage for STNAs and the effects of a reported shortage can be difficult without mandatory staffing requirements. Federal legislation through the Nursing Home Reform Act of 1987 gave standards for LPNs and RNs, but only required that nursing homes have “sufficient staffing” — no specific ratios — for nursing assistants.

Because of this, reports from nursing homes of staffing shortages during the pandemic are estimates. Instead of providing numbers of filled positions or openings, nursing homes answer yes-or-no questions if they have a shortage for different positions.

“So the fact that they're reporting these numbers as that, as high as they are, to me it's kind of scary,” Applebaum said.

Shortages don’t look the same from nursing home to nursing home, Wilfong said, noting that her  Sandusky veterans home reported having an STNA shortage every week since data collection began in May 2020. Wilfong said she reported STNA shortages because there were open positions, but the facilities never reached a critical level.

At her previous job at a private nursing home, Wilfong said staffing levels did become untenable.

Though STNAs provide vital, direct care and companionship to residents, Wilfong said, the position doesn’t receive the respect it deserves.

Activists, experts and nursing home administrators who talked with Eye on Ohio and IRW said that wages and workloads for STNAs were a factor in Ohio’s shortage.

“With the low wages that are paid to STNAs in nursing homes, you have people who could go to McDonald's or Taco Bell and get a job that paid about the same,”said Moran, the former labor organizer. “So you're talking bottom dollar for some of these nursing facilities and a really hard job with a high level of commitment for a low wage. And that drives people out of the industry.”

Data from the Paraprofessional Healthcare Institute shows that Ohio nursing assistants across health care industries, including nursing homes, hospitals and assisted living facilities, made a median hourly wage of $13.61 in 2019, about $1 less than the national median of $14.83 for all nursing assistants nationwide.

At The Normandy Care Center in suburban Cleveland, the starting hourly wage for STNAs is $14 or more based on experience, which Klarich said is a comparable wage based on a recent market survey. She added that STNA wages have to be proportional to other positions, such as licensed practical nurses and registered nurses, that require more education, licenses and skills.

At Sandusky Veterans Home, a union facility, the starting wage is $17.32 and has risen between 30 and 50 cents a year since 2016, according to internal data provided to Eye on Ohio and IRW.

But nursing home administrators were quick to point out that Ohio’s critical shortage of STNAs comes at a labor shortage in the state and in the country.

“Now you're competing with pretty much the entire county because everybody is competing for that same pool,” Wilfong said.

Both Wilfong and Klarich listed other businesses that offer similar or higher pay to STNAs that are also struggling to fill positions.

“They have to be a compassionate person that wants to help another person,” Klarich said. “You have to derive some type of job satisfaction from helping and working with the elderly.”

Part of this is because of the hard work STNAs have to do, Klarich said, work that became harder in the pandemic.

Shirer said STNAs and other nursing home workers had the added workload of adjusting to changes from the pandemic, including sometimes becoming caregivers outside of work for family members who became sick. Inside nursing homes, STNAs workload grew as family members who often provided care for residents, such as helping them with feeding or bathing, were unable to visit.

Anthony Caldwell, vice president of public affairs for SEIU, the union that represents some nursing assistants, said he had heard stories of nursing home workers who were unable to take time off, had insufficient personal protective equipment and had to work more than their scheduled hours.

While health care workers across the country were celebrated as heroes for battling on the frontlines of the pandemic, Caldwell said the hero label was a “slap in the face” for STNAs who walked into low-wage jobs with poor benefits.

“And I just can't understand enough how much it infuriated people, especially the workers that I talked to, to see these big ‘health care heroes’ signs on the front of the nursing home more as a marketing gimmick than anything,” Caldwell said. “But then once they got inside the facility, they didn't feel that they were treated as heroes.”

How Ohio became the No. 1 state for nursing home assistant shortages