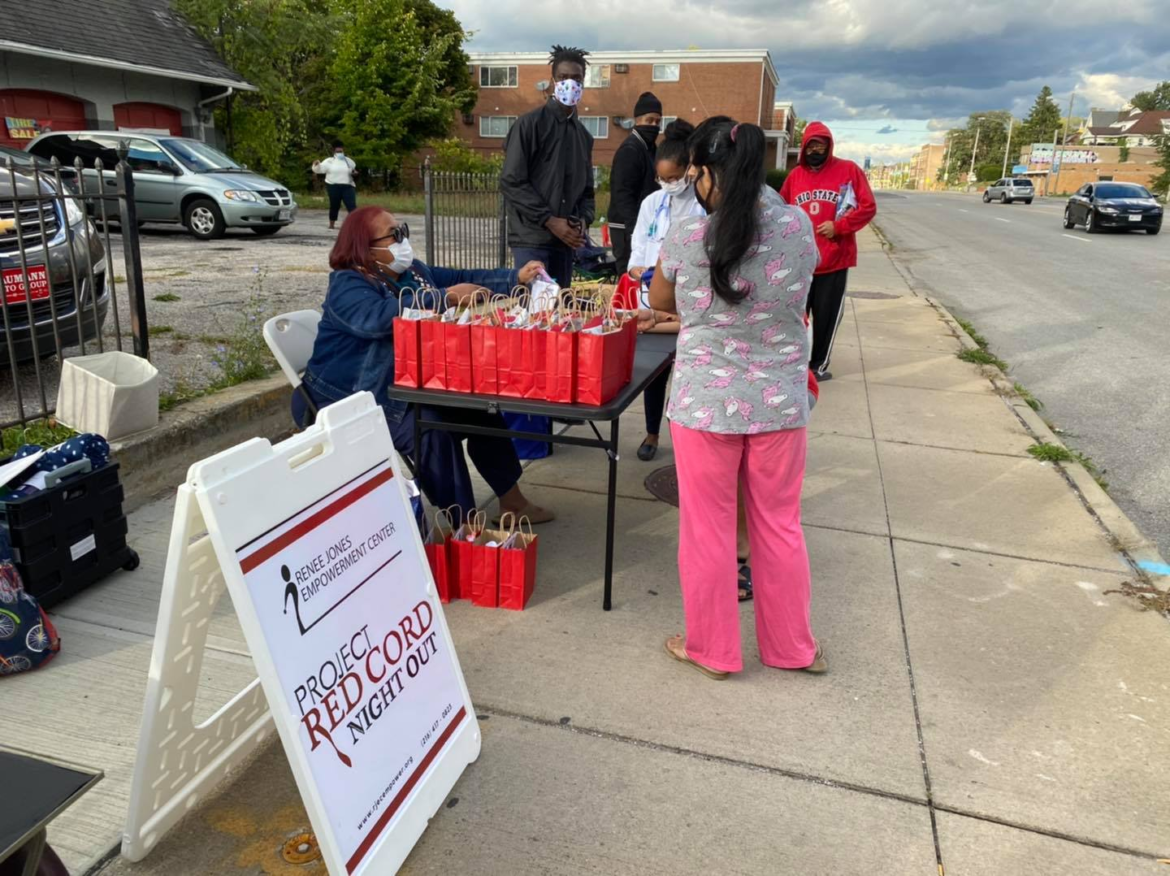 Renee Jones seated at the table with gift bags during a Project Red Cord night out community outreach evening in East Cleveland.

For women survivors of sex trafficking struggling to make ends meet, the COVID-19 pandemic has exacerbated an already desperate situation. Funding programs to support them have shifted to more urgent crisis funding— to house and feed the homeless, for example. Losing financial and food security only places these already scuffling women at an even greater risk of being trafficked again to earn money just to survive.

Renee Jones, president and CEO of the Renee Jones Empowerment Center (RJEC)  in Cleveland, a trafficking recovery center she founded in 2002 to help women survivors of sex trafficking, has observed a definite increase since the spring. “We’ve seen the number of women and the need for help increase in all of our street outreach locations,” she said. “A lot of the women either lost a job that paid minimum wage or had their hours cut, so there’s definitely been an impact on the population that we serve.”

Although accurate statistics for trafficking victims are difficult to track because of the underground nature of the crime, during 2019, Ohio Attorney General Dave Yost’s office identified a total of 305 potential victims of sex trafficking in the state, 96 of them were 18 or under. According to the Polaris Project, a nonprofit dedicated to ending modern slavery and human trafficking, which has operated the national  Human Trafficking Hotline since 2007, the pandemic and subsequent quarantine has led to an escalation in trafficking activity.

Full 2020 statistics are not yet available from Polaris, but the number of crisis trafficking cases handled by the Trafficking Hotline increased by more than 40% in April following the shelter-in-place orders compared to the prior month. Crisis cases are defined as those in which some assistance as shelter, transportation, or law enforcement involvement is needed within 24 hours.

Fortunately, Jones’ center has continued to provide face masks, hand sanitizer, personal hygiene products, clothing, food, and other necessities for the women throughout the year. They do so both at the RJEC and through Project Red Cord Nights Out street outreach activities to several neighborhoods in Cleveland where women forced into street prostitution by traffickers are most visible and active.

Through the end of September, the RJEC has given comprehensive support and recovery services to 216 clients. At street outreach events, they have distributed more than 850 of their trademark bags filled with personal care items, snacks, other gifts and contact information, more than 350 hot meals prepared by volunteer groups and the Salvation Army, and more than 400 facemasks, 100 of which were made by volunteers.

In December, Jones received a $10,000 grant from a donor who asked to remain anonymous that enhanced their ability to provide all of these items. Although they suspend their neighborhood street outreach programs from January until April for the winter, RJEC will do drive-by drop offs in neighborhoods to trafficked or recovering women who know them and recognize their distinctive van.

In July 2020, RJEC  added programming at the immense Spring Hill subsidized housing complex in Akron, where they serve more than 100 women and set up their outreach tables inside during the winter. In addition to distribution of PPE, food and other necessities, monthly workshops enable the RJEC’s trauma counselor and support groups to furnish the same services they offer clients of their center.

“We have the opportunity to provide human trafficking prevention and awareness to the women there who attend, since most of them have experienced sexual assault and are extremely vulnerable to becoming victims of trafficking,” Jones explained.

At the Jordan Community Residential Center in Cleveland, which provides recovery housing and trauma-informed care and counseling services, the staff has been extremely conscious of the added stress the pandemic has put on the roughly 20 female trafficking survivors in their care. Typically, the women live there for six to eight months, sometimes longer, until they are ready to transition back to a safe and healthy lifestyle.

The residents work with their individual therapists as well as with therapists from a counseling center Jordan is partnered with that provides online trauma counseling. The women also have access to support groups and spiritual support programs.

“The hardest part is not being able to see their children or visit as much as they were,” said Tenisha Gant-Watson, Jordan CEO, who founded the organization 16 years ago. “We have to be very careful about giving day or weekend passes now, because when we’re all together in one place, everyone’s safe, so having everyone leave to visit family and friends creates a level of concern for exposure and quarantining.”

To address that additional layer of trauma, isolation and stress from the pandemic and sheltering-in, Jordan purchased computers for everyone so that they can at least do Zoom online visits with their children. The center has also added activities such as making face masks, Gant-Watson said, to keep the ladies engaged.

Since the initial stay-at-home order in March, RAHAB Ministries in Akron has adapted its support programs. The solutions provider for women survivors of trafficking quickly expanded their street outreach efforts from one to five days a week in Akron and Canton. Since then, they have distributed approximately 11,000 meals. The outreach also provides an important human connection.

“Obviously, people feel very isolated during this time,” said Kelli Cary, vice president of programming for RAHAB. “So we’ve been able to provide those meals to not only the women and children we serve, but also broaden our scope to serve people who are particularly vulnerable now because of job loss, food insecurity, and isolation.”

Funded primarily through church and community donations, RAHAB also distributes other important items such as personal hygiene products and toys, puzzles and board games to engage children and help parents stuck in their homes who can’t afford to buy them.

“The main reason we go out is to offer hope to people, maybe just a smile or a prayer,” Cary added. “A lot of people are looking for that type of connection or relationship.”

RAHAB has continued its minor mentoring program, offering both in-person and online sessions, since youth are particularly vulnerable to predators because of increased time out of school and in front of a computer screen where traffickers may contact and groom them. As of October 1, the mentoring program has served 42 minors. (Referrals come through the Summit County Courts or community members or organizations.) Their adult safe house has served 16 women, and the youth safe house has sheltered 11 girls.

In September, RAHAB launched a new initiative, transitional housing for women who are ready to “graduate” from their adult safe house. RAHAB provided one of the first participants who was living in the safe house during the pandemic with a car paid for by an anonymous donor and an apartment so she could transition back into the community.

“We were able to meet those needs as well as offer long-term case management and mentorship after her graduation,” Cary said. “Our hope is that this continued support decreases her vulnerability as she transitions back into everyday life.”

Additionally, RAHAB operates one drop-in center in Akron that this year has served 263 individuals. In October, they opened two new drop-in centers in Stark County that served 35 women in the first month. Drop-in centers provide a critical safe place for women to visit during the day or night, depending on the facility’s hours, since many other safe locations are closed or have limited hours because of the pandemic.  The Cleveland Rape Crisis Center recently announced plans to open a drop-in center in the first quarter of 2021.

“These facilities allow the women to access valuable resources and the respite that they so desperately need,” she said. “That’s where they are able to start building rapport with someone, so that when they are ready, they have a connection in the community to help them take those next steps towards a safe, healthy life.”

This story is sponsored by the Northeast Ohio Solutions Journalism Collaborative, which is composed of 20-plus Northeast Ohio news outlets including Eye on Ohio, which covers the whole state.