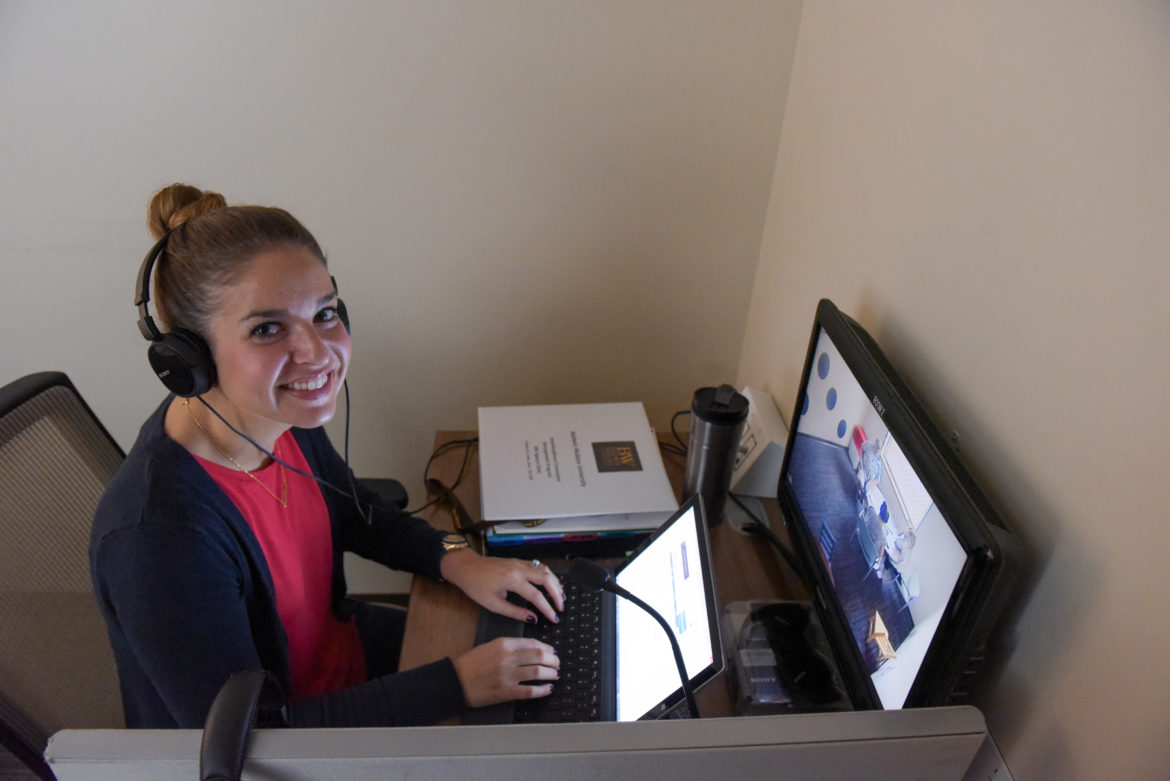 Students and faculty working with children and adult clients in the speech therapy clinic and family feeding center. Faculty mentoring students and parents in offices and observation rooms as part of the educational and training processes. This is a student

This article provided by Eye on Ohio, the nonprofit, nonpartisan Ohio Center for Journalism in partnership with the Buckeye Flame. Please join our free mailing list or the mailing list for the Flame as this helps us provide more public service reporting.

After beginning with some vocal stretches to warm up her voicebox, Ginger Williams hums and vocalizes to match a tone played by Maureen Brogan, a student clinician.

“Yes!” Ginger whispers, her excitement quiet but palpable even over video conference. Her 195 signifies “195 hertz,” which falls nicely into the 180-240 range associated with a female pitch.

For Ginger, a transgender woman, this result is exactly what she is here to achieve.

What’s in a voice? For participants in Baldwin Wallace University’s (BW) transgender voice clinic, a voice means feeling like themselves. And for many trans people, security in their voice presentation is nothing less than a matter of basic safety.

Transgender people are at higher risk of experiencing violence, homelessness, and abuse, attributable to transmisogyny and transphobia in their communities. These risks increase exponentially at the intersection of race and gender, with the Human Rights Campaign—the nation’s largest LGBTQ+ advocacy group—reporting that “fatal violence disproportionately affects transgender women of color.”

Voice therapy is thus a life-changing and potentially life-saving service for the trans community. Dr. Amy Vaughn oversees a transgender voice clinic at BW that provides free voice therapy to trans individuals, the majority of whom are over 40. The BW Speech Clinic is the only one in Northeast Ohio to offer free services to anyone experiencing communication disorders, and this specific program is one of a growing number of offerings in the country geared toward trans clients.

“This clinic is one of Cleveland’s best kept secrets,” according to Ginger, who has been participating in the voice clinic for over a year since hearing about it from TransFamily, a local transgender support group.

Michelle Guzowski has been participating in the clinic for over a year and a half. “When I started with the clinic, I always said I didn’t care about my voice. But as time went on and I started to work on it, I realized that I do care. And the best part is that it works the whole picture. It’s not just a voice,” she said.

Vaughn, a licensed Speech-Language Pathologist, began working at BW in 2017 as an Assistant Professor of Communication Science and Disorders and wanted to bring a transgender voice program to the university’s speech clinic after previously working with the trans community.

First advertising with a simple flyer posted to Facebook and at the LGBT Community Center of Greater Cleveland, the clinic has grown to be a meaningful part of the trans community of Northeast Ohio. The clinic meets weekly during BW’s academic terms and is run by two graduate student clinicians who are supervised by Vaughn.

Sessions begin with warm-ups to stretch and relax the neck and shoulders, followed by a series of vocal exercises in which the clinicians play a tone in a target vocal range and the group hums along. One by one, participants vocalize in the same range and their pitch is measured. Between sessions, members practice their speaking voice in their daily lives.

“I read advertisements on cars, even road signs and license plates,” said Ginger. “I fit it in whenever I can.”

Pre-pandemic, the clinic met in a small room on campus. But since the start of COVID-19, CDC restrictions have forced the group to move online as they don’t have a space where they can adequately practice social distancing.

“Proximity is really important therapeutically,” Vaughn explained. “Being online has affected that to some degree, but I also think that being online has opened some doors.”

While participants used to drive in once a week from up to 45 minutes away, now anyone in the state of Ohio can participate, thus eliminating significant transportation and time barriers.

“In the trans community, there’s a higher propensity for violence, emotional abuse, lower income regardless of educational level, so we’re talking about a marginalized population,” said Vaughn. “And some people don’t have transportation, so having to come to the clinic every week could be a roadblock to getting services. Online, we can connect with people all over Ohio.”

This month, the clinic  plans to add a second group for those just starting out in voice therapy. Vaughn is excited about the opportunities to continue amplifying the services of the transgender voice clinic to the trans community across Ohio.

“The majority of people I work with just want to feel comfortable in their lives,” she said. “They deserve the same thing that everyone else I’ve seen for the past 30 years of my profession as a speech pathologist deserves — to live the best life they can live and to have the best skills and ability to be the most they can be, whatever that looks like.”

This story is sponsored by the Northeast Ohio Solutions Journalism Collaborative, which is composed of 20-plus Northeast Ohio news outlets, including Eye on Ohio and The Buckeye Flame.

Caitlin Fisher is a queer, non-binary writer in Cleveland, author of The Gaslighting of the Millennial Generation, and prone to random acts of pep talk.