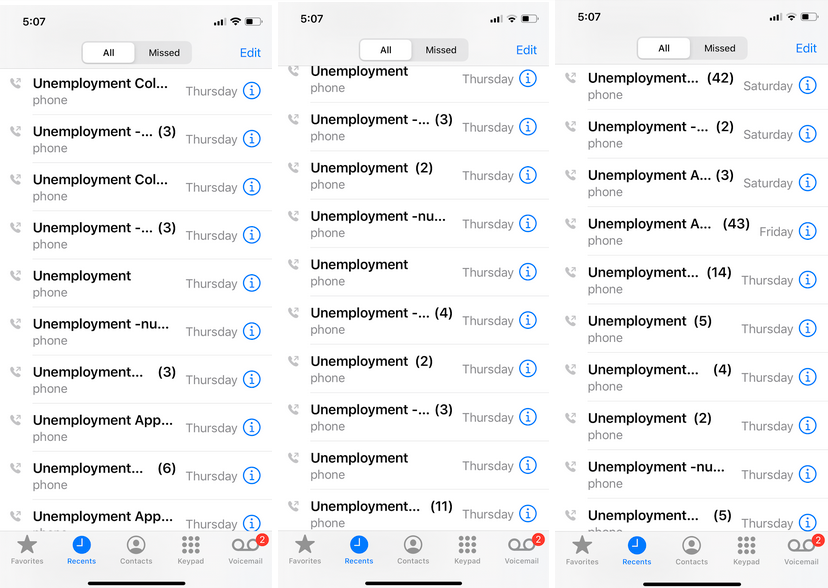 Marcia Gassaway was in the first wave of Ohioans put out of work by COVID-19.

The single mom from Cleveland went to the emergency room on March 15. Due to her coronavirus-like symptoms, doctors ordered that she be quarantined at a special facility.

Now, she’s recovering at home with her children, calling the unemployment help line over and over again.

“I call every day, every day,” she said. “I’m trying to recover with my health. It’s so scary...I cry at night because I don’t know what to do.”

Each time she dials the number, she hears an automated message that the system is experiencing a high call volume. Then it hangs up.

Until she got sick, Gassaway worked at the Amazon fulfillment center in Euclid. She hasn’t been laid off, but she doesn’t have paid sick leave, and her doctors haven’t given her clearance yet to return to work, where she might risk infecting coworkers. When DeWine shut down all Ohio bars and restaurants in mid-March, he expanded unemployment eligibility to cover people just like Gassaway so they could stay home instead of spreading the virus.

Gassaway has been without any income for five weeks, and she doesn’t know why her claim hasn’t been paid. She got through to an operator once, who told her to upload a note from her doctor. She did. That was weeks ago, and she said her claim is still listed as “pending.”

ODJFS knows the system is having problems due to the explosion in applicants since Gov. Mike DeWine ordered all bars and restaurants to close.

Between March 15 and April 4, the number of unemployment insurance claims filed was double the total for all of 2019.

On April 14, at his daily press conference, DeWine fielded a question about people who have been waiting weeks for their first unemployment payment.

“It's very upsetting to me,” he said, “and we can go through all the reasons why that is happening. But the bottom line for those of you who are not getting your check or have not been getting into the system, I don't think you want to hear anything. I think you want us to fix it."

ODJFS has been scrambling to expand its capacity to handle claims, and to set up new systems for each new kind of benefit added on the federal and state level. That includes the extra $600 per week benefit under the CARES Act, extended benefits for people receiving unemployment, and new eligibility for self-employed workers or those who didn’t make enough to typically qualify.

So far, though, the traffic is all funnelled through the existing Ohio Job Insurance system, which was built in 2004.

The state already had plans to update OJI, and hired a company called Sagitec Solutions in January 2019 to build a new system. But the process was expected to take two years. It wasn’t anywhere near ready to take over when the pandemic’s unemployment wave hit the department’s 16-year-old system.

According to ODJFS’s last weekly update, 696,519 people applied for unemployment between March 15 and April 4. Over the same time period, the department paid claims out to 195,000 people — about 28%. By April 12, Crow said that number had risen to 246,108, but the department hasn’t yet released the number of new claims filed between April 4 and 12.

Other states have been hamstrung because their systems are written in COBOL, an antiquated programming language that went out of vogue in the 1980s. ODJFS spokesman Bret Crow said the OJI system is based on a combination of COBOL and Java, a much more commonly used language.

“We are not in the position of other states that need to beat the bushes to find folks who know COBOL,” Crow said in an email. “While we have experienced slow processing times because our system is overloaded with claims just like every other state’s online claims system, programmers have not been an issue for Ohio.”

The department has been on a hiring spree for people to answer the phones. Before the lockdown, there were 42 unemployment phone operators, Lt. Gov. John Husted said at a press conference on April 15. Now they have about 1,194, all working remotely. Another 337 can join the team once they complete training.

Husted said next week they will also add voice recognition systems to answer frequently asked questions, and a “virtual call center” system is being set up to decrease wait times.

As of April 12, Crow said the average time callers were spending on hold was about 26 minutes.

The average hold time doesn’t reflect the number of people who were simply disconnected. Crow said he didn’t have any data on how often that was happening.

One Facebook page for restaurant workers affected by the pandemic has more than 27,000 members. Every day, members post questions about messages in the unemployment insurance application portal they can’t open, and cryptic notifications like “Break in Claim” or “Pending: $0.00.” They also trade tips for getting through to an operator at ODJFS, like selecting the option to speak to someone in Spanish, since the operators are bilingual and call volume seems to be lower.

One member, Jessica Zalants, sent screenshots of her phone logs, which showed more than 150 calls to the state unemployment insurance help line over three days. She said it didn’t reflect the additional calls that her husband, a furloughed engineer, had made on his own phone.

Zalants and her husband, who have a nine-month-old baby together, are having a house built outside Cincinnati. Their financial advisor recommended they wait to secure a loan so they could get a better interest rate. Now she’s worried they won’t be able to get a mortgage or make a down payment.

“It literally consumes everything I do,” she said.

Amy Pheneger, who worked at The Standard in Cleveland until the shutdown order, said she’s spent hours on hold with the unemployment line. But she said that’s better than no answer at all. She tallied 300 times she’s called, and counted three where she was able to speak to someone.

“It’s, like, this relief that comes over me when I hear that hold music,” she said. “It’s like, I’m on hold, thank God.”

Her account currently has a “break in claim” notice. Crow said that if claimants see that label, they have to call the unemployment hotline to resolve the problem.

Other group members say they don’t meet the typical income minimum to receive unemployment because their bosses weren’t reporting their tips, or didn’t have them officially on the books as employees.

Crow said many of those employees will be helped by the rollout of the Pandemic Unemployment Assistance program.

“We decided to go that route to offer better customer service to the new group of folks,” he said, and “to save strain on our already overloaded system that is handling hundreds of thousands of initial jobless claims in an unprecedented influx in the history of our state.”

Husted said on Wednesday that the PUA system will be accepting applications by April 25, though payments won’t start going out until May 15.

That’s not soon enough for Danyelle Warner, who worked at a bowling alley in Hilliard. She said she hasn’t been able to get benefits so far because her employer didn’t report all her wages.

Asked how she’s making ends meet, she wrote in an email, “I’m not at this point. What savings I did have are depleted. I have $0.98 in the bank at this very moment. I am relying on food banks to just keep my family fed.”

“I know we don’t save lives. I know we aren’t ‘frontline’ employees,” she wrote, but “this industry has always been there for us. I’ve often joked that even if the world was ending, I can always fall back on serving and bartending. That there will always be hours to pick up somewhere.

“March 16th, our end of the world happened. And there is not much to fall back on for some of us.”

“It literally consumes everything I do”: Ohioans desperate to reach unemployment hotline as calls dropped, claims languish