Innette Malumalu cooks for a community event from her home kitchen.

Every Wednesday afternoon, members of the Congolese Community of Greater Cleveland (CCGC) in Cleveland’s Clark-Fulton neighborhood file onto Elijah Kidjana’s porch to grab donated boxes of fruit and vegetables.

Some have lost their jobs due to coronavirus shutdowns. Others are searching for ways to feed children who can no longer access free school lunches.

When asked whether he’s worried about so many home visitors in the midst of a pandemic, Kidjana just tightens his face mask and laughs.

“There are many things that will kill the Congolese people before coronavirus,” he says.

As a Congolese refugee himself, Kidjana is keenly aware of both the health and economic challenges facing the Congolese community in Cleveland.

Over the past decade or more, many residents fled the Democratic Republic of Congo (DRC) due to an ongoing civil war. Some resettled in neighboring countries, while others were resettled to the United States by the U.S. government.

From 2015 to 2018, more than 500 Congolese refugees were resettled to Cleveland by the United States government, making it the largest growing refugee population in the city.

That number does not include people like Kidjana, who moved to Cleveland from other states after hearing that there was cheap housing and open jobs.

After Kidjana and his family moved to Cleveland from Boston in 2016, he helped to form the CCGC. 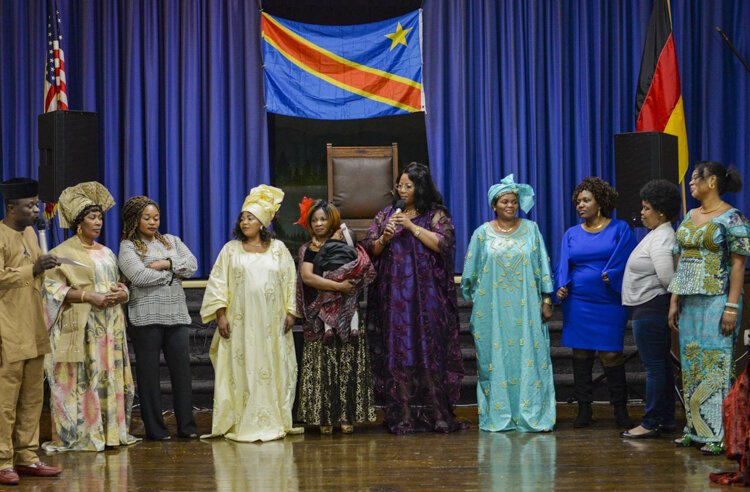 “The goal of the CCGC is to share ideas together about what we [as Congolese refugees] can do to succeed in Cleveland,” says Kidjana. “We know if we work together as a group, we can go farther than as individuals.”

Prior to the coronavirus outbreak, the group focused on helping newcomers adapt to life in Cleveland—from sharing information on which employers hired non-English speakers to purchasing “welcome gifts” like pots, pans, and kitchen items.

As an all-volunteer, refugee-led group, the CCGC helps Congolese residents build a sense of home in their new city, as well as access supplies that are not available from non-profit or government programs.

Now, with coronavirus shutdowns causing many Congolese refugees to lose their jobs, the CCGC is playing an increasingly important role in helping Congolese people to help themselves. The group shares information about public health updates, provides cash assistance to those who have lost jobs, and helps translate for complicated government assistance applications— like Ohio’s Unemployment Application and the Federal Pandemic Unemployment Application.

“Recently, it has been really bad” says Prosper Akili, who came to Cleveland in 2016. “Most people were working in jobs where they were earning $11 an hour.... Many were laid off and had to stay home. Now, some families are struggling to pay rent or find food.”

And while government and nonprofits have responded with an array of support programs, Akili notes that these programs are more difficult for refugees to access than for non-immigrant families.

These are obstacles for many Congolese, who often don’t own computers and speak French or Swahili. “Some people in our community can’t even read,” Akili adds.

Other nonprofit responses have unintentionally excluded members of the refugee community. Many food banks, for instance, have moved to a drive-through model to encourage social distancing. Congolese residents without cars, or those who work during food bank hours, cannot access those food banks.

The CCGC responded to these service gaps by encouraging refugees to help one another to solve their own needs.

In doing so, they model ways in which “mutual aid” systems can play a crucial role in times of crisis.

Unlike traditional charity groups, mutual aid systems like the CCGC do not rely on external donors to identify problems and fund solutions. Instead, these groups encourage community members to identify their own needs, broadcast challenges to other members, and find solutions from within the community.

For the CCGC, much of the coordinating occurs via social media. Individuals post needs to group chats in their native language, often recording voice messages for the benefit of those who can’t read. Other members can respond with offers to assist.

Akili and Sumaili Walupembe, for instance, learned that many people didn’t understand how to file for unemployment or track down their IRS stimulus checks.

So, they volunteered to help translate for over 35 unemployment applications and IRS forms, as well as translate public health updates into Swahili and French. 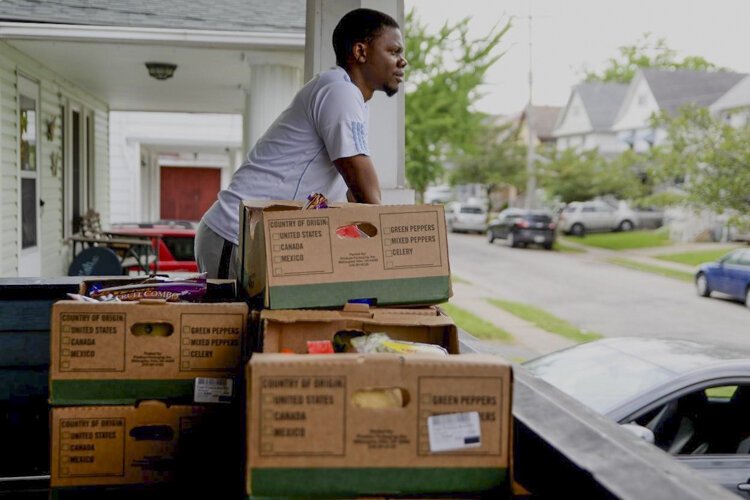 The women’s branch of the CCGC, meanwhile, focuses specifically on providing women-to-women assistance to meet the needs of mothers in the community.

Prior to COVID-19, a group of about 35 mothers met monthly to discuss community challenges. Each attendee donated $20 to a common pot, which was then re-distributed to single mothers or to newcomers who needed additional assistance.

“We have very strict rules about how we spend the money,” explains Julienne Lumbala, the women’s branch president. “That way, no one can take advantage.”

“There was one house where the mom was in the hospital, and so the house was being run by two younger women,” explains Lumbala.

Because of coronavirus shutdowns, neither woman was able to find work. The women’s group was able to help support the young women with cash assistance from the common pot, which they used to buy items to help sanitize the home.

The assistance CCGC provides sometimes extends beyond the Congolese community.

Kidjana also connects with nonprofits and food distributors to organize the weekly food distributions at his house. Now every Wednesday, 50 families—both Congolese and American families—come to pick up donated food boxes. Kidjana’s house remains open for pick up until the last box is gone, accommodating those who work different shifts. 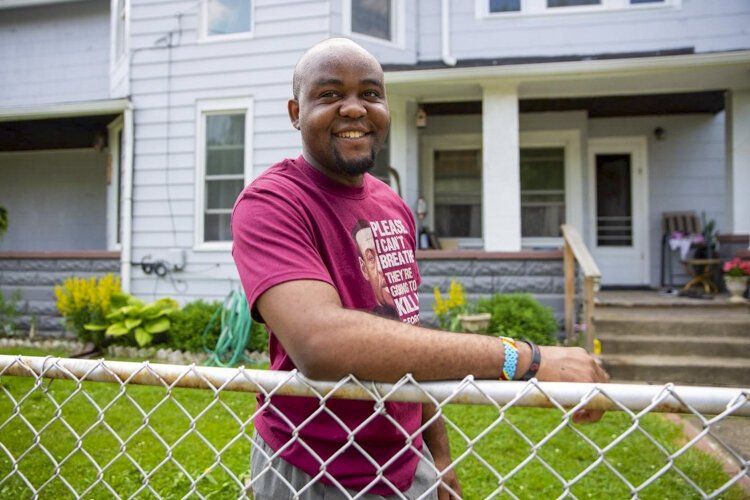 Mayele Degaule outside his home.

Lumbala admits that social distancing has made organizing the CCGC’s efforts more difficult. The women’s monthly meetings have been put on hold, and women are less likely to donate when they’re not meeting in person.

“If you want to keep everyone together, you have to have a big heart and a strong strategy,” says Lumabala.

But the years of in-person organizing has laid the groundwork for efficient responses during the pandemic.

“Recently there was a family who had a member pass away” said Inette Malumalu, one of the group’s original founders. While Malumalu didn’t know the family personally, she had heard through the group that they were refugees and that they needed assistance.

“They didn’t have money for the funeral, so I called all the mothers and we cooked for them and raised money.”

Together, the group raised over $2,000 to assist with burial expenses.

Group members often assist one another, despite their own personal challenges.

For example, David Kipata was laid off because of coronavirus. But when he heard that members in the group were looking for masks, he sprang into action. He paid a fellow Congolese community member to sew 180 cotton masks, which he then distributed to Congolese and Nepalese refugees in the Clark-Fulton neighborhood.

“I know what it’s like to only make $10 an hour and not have any money for extra things,” he says. “I was helped by many people, so I wanted to find some way to help with what little money I had.”

Now, members of the group are looking for ways to move beyond just assistance within the Congolese community and work toward structural change and recognition within the city and the entire country. 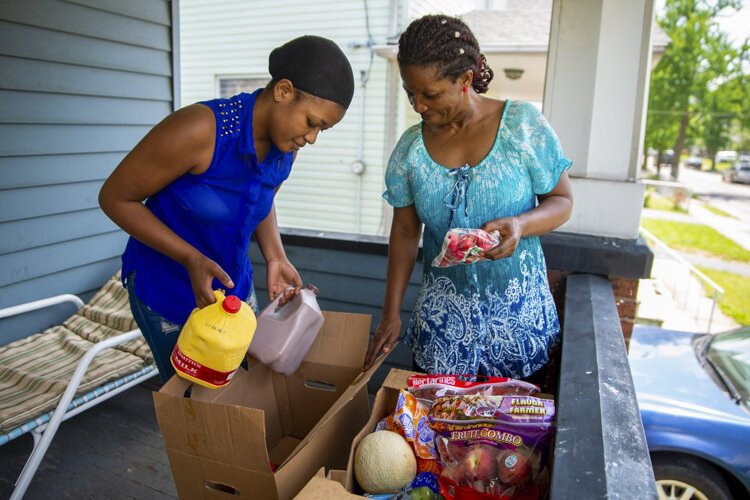 Mayele Degaule, the leader of the CCGC’s youth chapter, has founded an advocacy group called Advocates for Peace. The group wants better recognition of the Congolese community’s needs in decision-making bodies, and previously traveled to Washington D.C. to advocate for national pro-refugee policies.

The group is also searching for ways to better engage with institutions such as the Refugee Services Collaborative (RSC)—a coordinating body for refugee-focused non-profits—as well as at the Cleveland City Council level.

“They are talking about [decisions that affect] refugees, but we’re not there to advocate for ourselves,” says Degaule. “If you’re not at the table, then you’re on the menu.”

Members of the CCGC have written to state representatives asking that government websites, driver’s permit tests, and other services be available in Swahili.

Finally, Degaule and other leaders are spearheading a drive to encourage Congolese refugees to participate in the 2020 Census.

They say they hope to reveal the depth of their impact in Cleveland, and the ways in which the growing population is shaping not only the Congolese community, but their broader neighborhoods as well.

This article  is part of the Northeast Ohio Solutions Journalism Collaborative, a project composed of 16 Greater Cleveland news outlets including Eye on Ohio, which covers the whole state.  To support us, please sign up for our free newsletter or text 216-867-6327.

Kindred care: Congolese refugee community takes care of its own, and others, during COVID-19