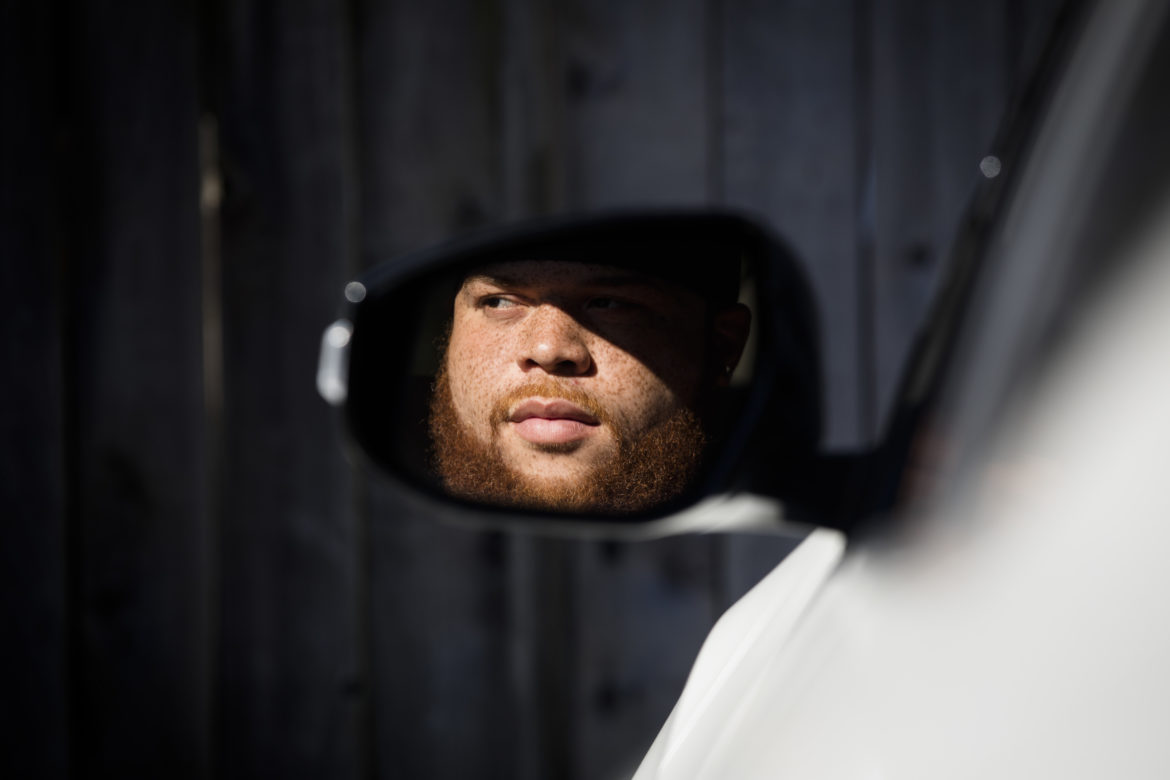 Jermiah Miller looks in his side view mirror on Tuesday, Oct. 8, 2019, in his Nissan Maxima SR at his residence in Colerain.

Reporters from the nonprofit newsroom Eye on Ohio, The Cincinnati Enquirer and researchers from Stanford University’s Big Local News program examined police stops to assess how the three largest communities in Ohio use public safety resources and to identify possible bias in policing.

Jermiah Miller, a biracial man with self-described pale skin, said he feels like he has a foot in two worlds: one in which cops view him as white, the other as black. He believes he’s treated better when he’s perceived to be white.

Miller, 26, was ticketed for driving with a suspended license and other charges four times last year. Twice cops listed his race as white, and twice as black.

In the two instances in which he was listed as white, Miller’s charges were ultimately dismissed, according to court records.

In the other two, in which he was listed as black, he was convicted and fined more than $600.

“Every ticket that I’ve got that was either biracial or black is always hitting me harder than when … it says white,” Miller said.

Miller spoke out about his experience amid a months-long analysis that found a racial disparity in police traffic stops in Ohio’s three largest cities. Certain police actions, such as pulling over a driver or issuing a ticket, are more likely to occur in predominantly black neighborhoods than in white ones.

Cincinnati police stopped Miller once last year, in the Clifton Heights neighborhood. Miller was charged with driving with a suspended license and running a stop sign. In the race column on the ticket, the officer penned a large W, for white.

Sharonville police made another stop and listed his race as white.

The Ohio State Highway Patrol made the other two stops in which Miller was identified as black. Those stops were in Colerain Township.

Hamilton County Municipal Judge Bernie Bouchard heard three of the four cases on the same day. He said a prosecutor agreed to dismiss two cases in exchange for a guilty plea in the third, which included driving while suspended and speeding charges.

Bouchard added that Miller’s race did not play a factor in the courtroom.

“We took an oath to see everybody the same,” Bouchard said in an interview. “We all have the same number of chromosomes.”

Bouchard said he does not perceive racial bias in the city’s policing and instead pointed to body camera footage of police being verbally abused as evidence that cops are mistreated.

Jacqueline Greene, a partner at the Ohio civil rights firm Friedman and Gilbert who deals with police and prison misconduct, has a different perspective.

Municipal Court Judge Heather Russell handled Miller’s fourth case, in which he pleaded guilty to reckless driving, driving while suspended and a turn signal violation. That plea occurred about five months before the Bouchard cases concluded.

Russell could not comment on the case due to an open warrant against Miller, said her baillif, Jessica Jefferys. Miller is accused of a probation violation in the case handled by Russell for his failure to pay fines and fees and a subsequent arrest for driving under suspension and failing to display a license plate, among others.

Miller owed more than $600 as of September in the Russell case, according to court records.

Lt. Steve Saunders, a Cincinnati police spokesman, wrote by email that many factors can influence a court outcome, including previous violations and whether Miller had a lawyer. (Court records indicate he didn’t in any of his cases.)

Simply being pulled over, even for a minor violation such as speeding, can lead to greater legal trouble, according to drivers and experts.

Miller has faced more than $1,600 in court costs and fines in the past seven years, according to an analysis of his court records. Suspensions have hampered his ability to earn a living, especially considering that he’s the only person in his immediate family who drives.

“It messes me up,” he said, “because I need to get to work to even pay a ticket.”

Bouchard, the judge, said financially based violations, such as driving without insurance or with a damaged muffler, are more likely to happen in lower income areas “than, say, Hyde Park, where everybody pays their insurance.”

When asked if this meant poverty was being policed more than crime, he said, “If you’re poor, do you not have to follow the law? Why do I have to get insurance for my car?”

Al Gerhardstein, a Cincinnati civil rights lawyer, said driving without a license is about survival.

“It’s a serious burden when you use traffic enforcement for punitive means,” he said. “Obviously nobody wants people speeding through school zones … but we also have alternative means of addressing some of those problems other than just constant enforcement.”

The Enquirer’s Albert Cesare contributed to this story.

This investigation took a team of five people nine months to complete. Please sign up for our newsletter or support our work, as you are crucial to the future of Ohio's civic participation.