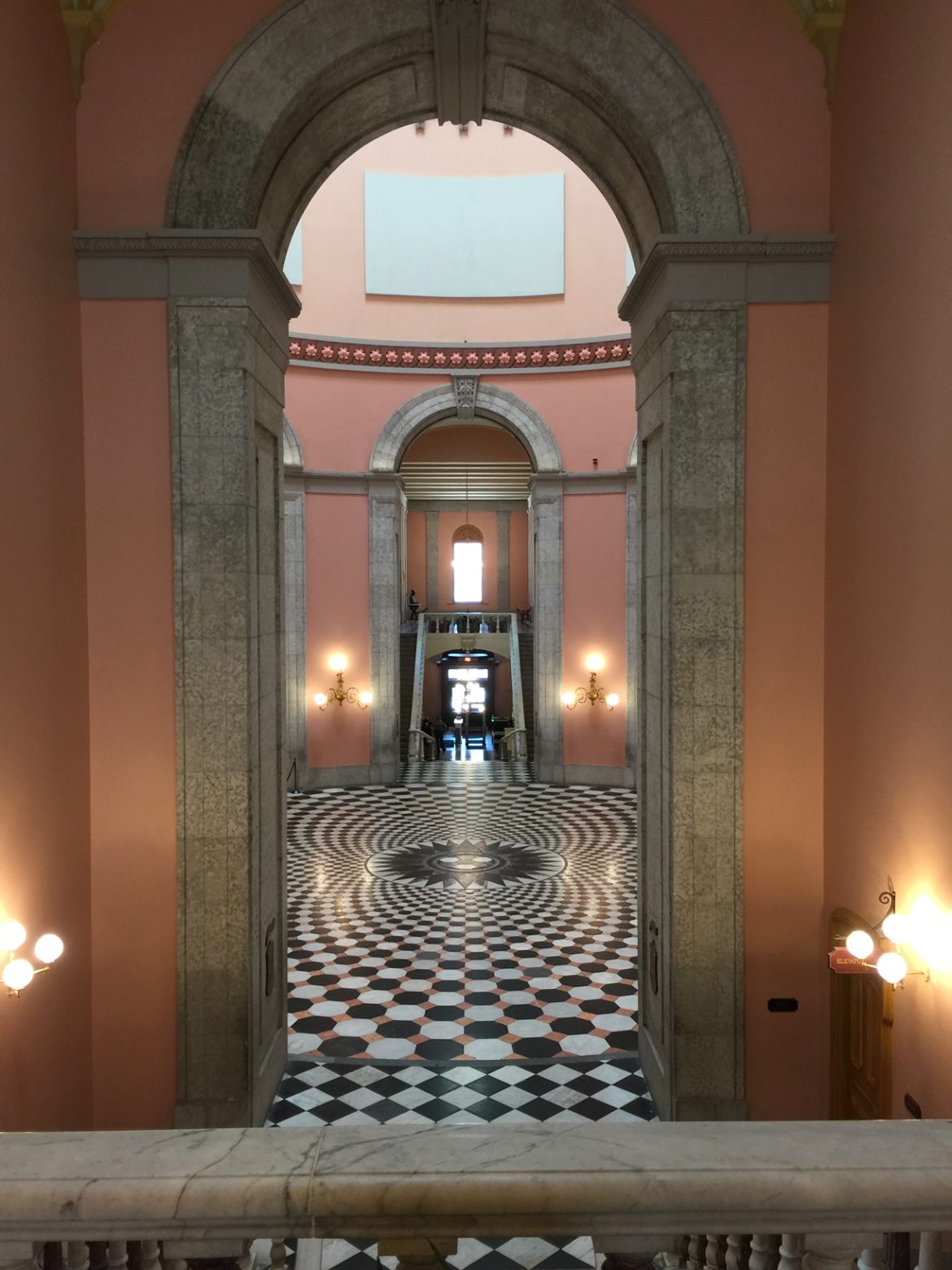 Inside the Ohio Statehouse. (Stock photo/Eye on Ohio)

Nuclear and coal bailout is the latest in a line of favorable policy actions that shield noncompetitive plants from competition.

Utility, nuclear and coal interests are big players in Ohio politics, giving about $3 million to Ohio political campaigns in 2018, according to data from the National Institute on Money in Politics.

The industry interests have long been active politically. But just as competitive markets began coming into their own around 2010, the pattern of campaign contributions also shifted.

Donations to Ohio campaigns from the utility, nuclear and coal industries in 2010 were more than double the amount for 2008. Election cycles after 2010 saw a gradual drop-off in recorded donations, followed by a smaller bump in 2018. That doesn’t necessarily mean the industries’ total spending went down, however.

“Lots and lots of things changed simply because of Citizens United,” explained Catherine Turcer, executive director of the government watchdog group Common Cause Ohio. In that 2010 case, the U.S. Supreme Court held that corporations have a constitutional right to spend for political advertising.

That spending isn’t subject to the same limits as donations, which are coordinated with a specific candidate’s campaign. And it’s not possible to track where all political donations come from.

“Ohio has too many dark money loopholes,” said Jen Miller, executive director of the League of Women Voters of Ohio.

“Dark money” generally refers to political spending where the source of the money is not disclosed.

Some of that dark money helped elect additional lawmakers who favored subsidies for nuclear and coal plants in 2019, legislation that also gutted Ohio’s clean energy standards. Dark money spending also funded opposition to a referendum effort that could have let voters reject those subsidies. Current law may exempt much of that information from the Secretary of State’s filing requirements.

Yet even with all the opportunities for dark money spending, campaign contributions linked to Ohio utilities and the state’s nuclear and coal industries have remained strong.

“Our public utilities have been tied to political dollars for years,” Turcer said. Actions by lawmakers and decisions by the Public Utilities Commission affect the rates utilities can charge and how much they can recover from customers.

In 2008, Ohio Senate Bill 221 established the state’s clean energy standards, while also calling for an end to so-called transition charges that had been allowed after a 1999 law deregulated the state’s retail electricity markets. The bill also opened the door for new ways for utilities to subsidize their affiliates’ generation plants.

Nonetheless, the competitive market for electricity in Ohio began to take off. Meanwhile, the share of electricity from fracked natural gas was climbing.

Read more: How affiliate arrangements, subsidies and riders led to higher electric bills in Ohio — even as power prices declined

In 2018 in particular, “FirstEnergy was ramping up its campaign for a bailout for nuclear and coal plants,” said Dave Anderson at the Energy and Policy Institute. And, he added, “We know that FirstEnergy was meeting with [now-Gov.] Mike DeWine and others during that period.”

That campaign culminated with the passage of House Bill 6, which provides subsidies to certain coal and nuclear plants and guts much of Ohio’s renewable energy and energy efficiency standards.

FirstEnergy ranked among the top 25 identifiable donors to 2018 campaigns statewide in Ohio, according to data from the National Institute on Money in Politics. Contributions of $743,511 made FirstEnergy the top donor in the electric utility, coal and nuclear industries for state and local campaigns in Ohio in 2018. AEP’s $351,500 for Ohio campaigns that same year was roughly half that amount.

Householder played a key role in shepherding House Bill 6 into law. After the Ohio Senate did not meet FirstEnergy’s alleged deadline of June 30 for passage, Householder played a key role in the stalled negotiations that caused the General Assembly to miss its deadline for a new budget. Those differences were resolved the same day when the Senate passed its version of HB 6. Householder then delayed a House vote because he was apparently one vote shy of the number needed for acceptance of the changes made in the Senate version.

Businesses give to political campaigns “because they want to impact policies that are going to affect their companies’ bottom line,” said managing director Denise Roth Barber of the National Institute on Money in State Politics, which runs FollowTheMoney.org.

“It’s hard to know always whether their contributions actually sway a member’s decision,” Roth Barber noted. “However, companies are typically very strategic in who they give to.” Some politicians may already be sympathetic to a company’s interests. Campaign contributions might not sway that person’s opinion. But a company may “want to make sure that the person gets elected,” she said.

“Campaign contributions also help with providing access to lawmakers,” she continued. “So if a person understands that he or she got into office in part because they were helped by their donors, then … there’s a belief out there that they have access to that person because they helped get them elected.”

“The approach of looking at what’s on the public policy agenda and correlating it directly with how the campaign cash is flowing gives us a picture of one of the ways that utilities attempt to kind of influence the process,” Turcer said. Obviously one can’t say that specific donations led to particular actions, she added. But the snapshot is nonetheless helpful.

The electric utility industry ranked eighth among specific business groups for Ohio campaign contributions in 2018 according to data from the FollowTheMoney.org. That ranking doesn’t count political party committees, candidate committees, lawyers and lobbyists, unions or retired people. Utility groups’ giving came to about $2.3 million in 2018.

Campaign contributions from the utility, nuclear and coal industries had jumped dramatically in 2010. That was the first year after a competitive retail electricity market finally developed in the state. Soon afterward, the combination of fracking and horizontal drilling led to a natural gas boom, which presented substantial competitive challenges to older coal and nuclear plants.

A 2008 law also established the state’s renewable energy and energy efficiency standards. As costs for clean energy have come down, they have become better able to compete with older, less competitive power plants.

Ohio’s energy industry as a whole gave nearly $36 million to statewide campaigns from 2012 through 2018. To put that in context, the largest industrial donations came from the healthcare industry and from the finance, insurance and real estate sectors.

Ohio utilities, coal interests, and affiliated donors gave more than $12.5 million to Ohio political campaigns during that period. Nearly $3 million of that came from FirstEnergy. Directors, employees and others affiliated with the company gave an additional $575,384 for those years.

AEP gave $2.01 million to Ohio campaigns from 2012 to 2018, with another $205,894 coming from directors, employees and others affiliated with the company. During that same time frame, Duke Energy and affiliated donors gave about $1.2 million, while Dayton Power & Light and affiliated contributors gave more than $350,000.

Contributions to lawmakers from both parties have held steady over the past decade, AEP company spokesperson Scott Blake said. Like FirstEnergy, AEP’s donations were substantially higher for election years after 2009. AEP’s giving to Democratic candidates ranged from 13% to 19% of its donations to Republicans for 2012, 2014, 2016 and 2018. (Contributions in odd-numbered years are generally lower; 2003 and 2005 were anomalies in Ohio because of ballot measures.)

Multiple state policy actions since 2010 reflect the interests of utilities, their parent corporations, and the coal industry in an increasingly competitive market.

SB 310 also set up a study committee, which in 2015 recommended an indefinite continuation that would have effectively repealed the standards. All voting members of that study committee got campaign donations from FirstEnergy. American Electric Power gave to nine of the 12.

State lawmakers voted in 2016 to make compliance with the standards voluntary for another two years, though then-Gov. John Kasich vetoed that law. The standards that resumed were weaker than those in place before SB 310 passed.

Meanwhile, a last-minute budget bill amendment in 2014 tripled wind farm setbacks. Subsequent efforts to roll back HB 483’s restrictive provisions have been stymied in the Ohio House. A 2019 analysis found that new solar or wind power plants could replace roughly three-fourths of existing coal plants for less than the cost of continuing to operate those plants.

Also starting in 2014, Ohio utilities sought subsidies for nuclear and coal plants from the Public Utilities Commission of Ohio. Bills in the 2017-18 legislative session would have written those subsidies into law.

Those bills from the last legislative session failed. This session, though, lawmakers came through for utility companies with HB 6. DeWine swiftly signed the bill into law on July 23, after the House’s 51-38 concurrence vote late that morning.

Ratepayers will pay subsidies of about $1.1 billion for FirstEnergy Solutions’ Davis-Besse and Perry nuclear plants through 2026. HB 6 also authorizes charges to subsidize older coal-fired power plants. Ratepayers in territories for AEP, Duke and Dayton Power & Light already pay for their utilities’ share of electricity from two 1950s-era plants. The new law makes the mandate statutory for all ratepayers. At the same time, HB 6 guts the state’s renewable and energy efficiency standards.

“House Bill 6 is just the latest, though maybe the worst, of the retreats” from power plant competition that began in 1999, said Ohio Consumers’ Counsel Bruce Weston in a statement after Gov. DeWine signed the bill. “Power companies have too much influence in Ohio,” Weston added.

“AEP advocates for energy issues that positively impact our customers, employees and business operations in the state of Ohio,” said Blake, the company spokesperson. As part of a partial settlement that led to ratepayer subsidies for its share of power from the two 1950s-era plants, the company had supported efforts to bring the Midwest’s largest solar project to Ohio.

Regulators rejected the utility’s bid to have ratepayers pay for power from that project, however, leaving the developers to search for other power customers. Some money from HB 6 charges could help pay for that project, although the eligible amount for solar projects could be only a tenth of the amounts going to coal and nuclear plants. Various other solar projects would not qualify.

“FirstEnergy Corp. makes and discloses all campaign contributions in accordance with applicable state and federal laws,” said company spokesperson Mark Durbin. “In the meantime, FirstEnergy continues to focus on transforming into a fully regulated utility that is making investments that will strengthen the electric system, boost reliability for customers and prepare the grid for smart technologies.”

Meanwhile, Ohio lawmakers are considering more measures that could pay off for utilities, their parents and affiliates, as well as the nuclear and coal industries.

HB 247 could expand opportunities for utilities to engage in ratepayer-subsidized dealings with their affiliates. House Joint Resolution 2 would build on debunked fears about foreign control of energy infrastructure to forbid any share of ownership of various power plants under specified conditions. And an Ohio Senate committee recently invited a leading coal industry lobbyist to present arguments about so-called “fuel secure” plants and reliability. Federal regulators previously rejected that argument as a basis for guaranteeing cost recovery for coal and nuclear plants.

This story is part of a collaborative journalism project produced by Eye on Ohio, the Ohio Center for Investigative Journalism; and the Energy News Network. Funding is provided by The Cleveland Foundation and the George Gund Foundation.