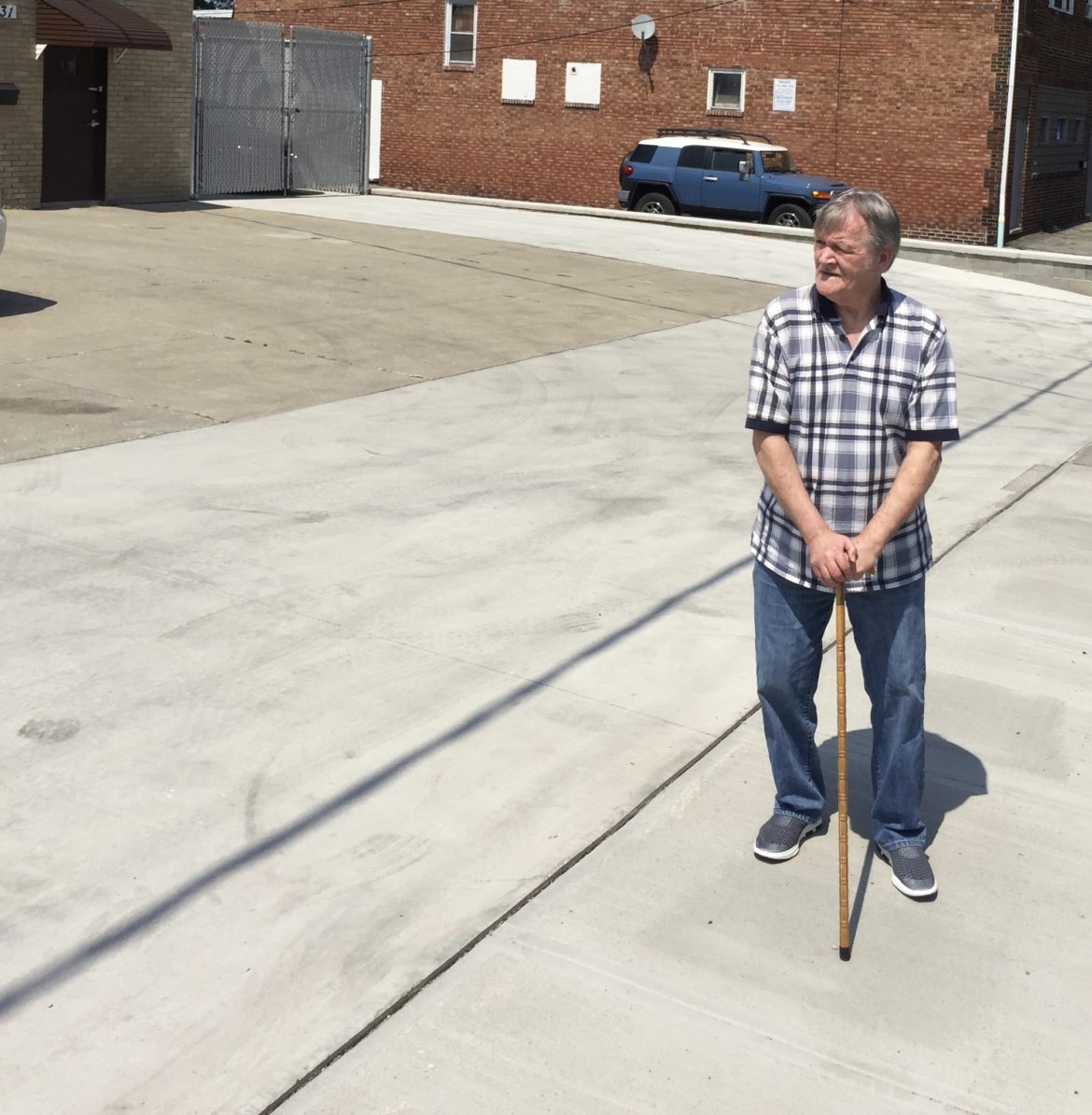 Elliot Feltner stands on the sidewalk in front of the auto body shop that was in his family for decades. (Photo Credit: Eye on Ohio)

For years, Elliot Feltner’s father-in-law operated an auto body shop in Cleveland. Later in life, a stroke debilitated the old mechanic, and his care proved a heavy burden for Feltner’s wife, Linda.

Not long after burying her father, in 2009, Linda Feltner discovered her chronic cough was more than just bronchitis: it was cancer. She died three years later.

When Elliot Feltner finally sorted through the medical bills and the loss of his only family, he discovered the body shop property he inherited owed considerable back taxes, which he couldn’t afford. So he put the shop up for sale and told the county he’d use the proceeds to pay off the debt.

But after signing a buyer, the sale fell through because Feltner discovered the property had already been sold to the county land bank, he says without his knowledge.

“They called me one day and said you don’t own the property. Someone else does. And I was devastated,” he said.

The land bank then gave the property, valued at $144,500 in county records, to a private company which paid nothing for it. And taxpayers recovered none of the $68,089 in taxes and interest owed to them, money that could have gone to roads, schools, and emergency services.

“The government can take properties through public domain. That’s been the law for decades. But there’s never been an occasion where the government has been allowed to take a property without compensating the owner for its value,” said former Ohio Attorney General Marc Dann, who represents Feltner in the case.

In November 2019, Feltner’s case reached the Ohio Supreme Court. Justices typically take an average of about six months to decide a case, said Edward Miller, the court’s director of the Office of Public Information, though the time can vary widely.

“I think everybody’s acting in good faith here. I don’t think anyone has got bad intentions. But these folks, and particularly the folks at the land banks who are passing these properties on, had to know that there was value being taken from people in the process and that’s not okay. The County Board of Revision would know because guess what? The County Board of Revision also decides what the value of the property is. There’s a county record that tells you what the value of the property is,” Dann said. “(They were) stealing people’s equity very consciously and openly.”

Cuyahoga County declined to comment on the case, citing pending litigation. East Side Automotive Services, Inc. did not respond to requests to comment.

In 2006, the Ohio legislature passed the fast-track law, though it wasn’t widely used until the mortgage crisis of 2008. Not to be confused with a later expedited foreclosure process that goes through the court system, HB 294 created an administrative foreclosure process that skips the court entirely. Foreclosures instead end up at the Board of Revision (BOR), the panel that normally looks at the valuation of properties when a taxpayer thinks their property tax is too high.

BOR members don’t have to be lawyers — in fact most are not. And BOR members are also often on the board of the county land bank, which receives most properties. Those properties are then passed, with clean title and no liens, onto developers.

“They are good people,” Dann said, referring to the Cuyahoga Land Bank. “And they are very, very sincere in their desire to improve the community. And I can’t compliment them enough on the innovation and the determination they brought to the process. But you can’t do it without following the constitution. And that’s the difference. You can’t cut corners.”

The Ohio Center for Investigative Journalism searched through thousands of records in Montgomery and Cuyahoga counties, where the greatest volume of BOR foreclosures take place, to add up the costs to taxpayers, homeowners, and mortgage lenders.

In 2019, the Montgomery County Treasurer filed 207 unique foreclosure cases in the BOR. If all those cases close, taxpayers will lose out on at least $2,251,870 owed to public coffers.

In 141 of those cases, the house’s value exceeded the amount of taxes owed. Homeowners, mortgage lenders, and other lienholders lost or will lose up to $2,796,140 in 2019 alone. (Though houses sold at sheriff sales don’t often fetch their listed value.)

In Cuyahoga County, the County Treasurer filed 3,856 Board of Revision cases in 2018 and 2019. If those cases close, homeowners and banks will lose $77 million worth of their house’s value. Taxpayers, who would have received $9 million at a sheriff’s sale, instead get none of that money toward community services.

This amount vastly underestimates the amount of taxes owed to the county, however. In most cases, the government asked for restitution far below the amount owed. In one case, the Treasurer asked for 13 cents in taxes—both spelled out and in decimals — for a property that hadn’t paid its full tax bill since 2008.

John Lamb, a project engineer from Columbus, lost a property that had been in his family since 1965.

“It sucked of course. That house had a ton of memories,” Lamb said. “We would go up there every Fourth of July when I was a kid.”

His grandparents had originally built the house. But after his grandmother, followed by his mother, died shortly after his college graduation, he was overwhelmed with medical bills and had no other family for support.

To skip the court system, counties have to formally adopt the special BOR foreclosure process. Eleven have done so, but most have not.

In Montgomery County, developers who do get free properties still have to pay a service fee, usually $3,000 to $5,000. New owners are also required to maintain the property up to community zoning standards, such as cutting the grass and fixing any broken windows, within six months of acquiring the property’s title.

All properties that go through the BOR process are also legally required to be vacant properties.

But determining who lives at a property can be particularly difficult if homeowners take an extended leave of absence or the homeowner died, said Andrew Engel, who represents an heir who lost her share of her mother’s home through the Montgomery County BOR process. Her class action case is now pending in the Southern District of Ohio.

“Many of these property owners can’t afford an attorney. Based upon my review of hundreds and hundreds of these cases in Montgomery county, the properties that go through these foreclosures are often owned or located in the poorer portions of town. And it seems that those at the lower end of the economic scale are bearing the brunt of this process,” Engel said.

In October, Marc Dann filed a class action lawsuit against Cuyahoga County, on behalf of all similar parties. The County filed a motion to dismiss. The case is still pending in Ohio’s Northern District federal court.

Taxpayers Lose Out on at Least $11.25 Million, Homeowners and Banks Lose up to $80 Million in Little-known Foreclosure Process That Skips Sheriff’s Sales

2 thoughts on “Taxpayers Lose Out on at Least $11.25 Million, Homeowners and Banks Lose up to $80 Million in Little-known Foreclosure Process That Skips Sheriff’s Sales”