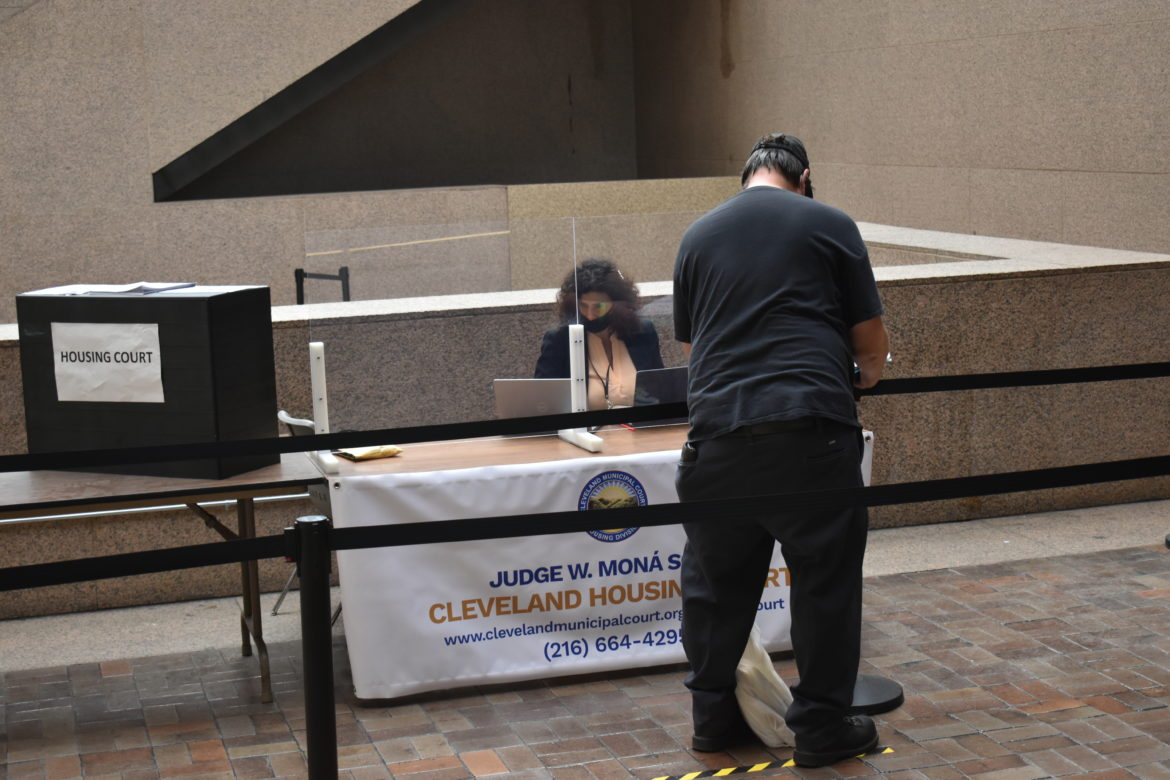 A man brings paperwork to the entrance of the Cleveland Housing Court, located inside the downtown Justice Center. (Photo by Conor Morris.)

This article provided by Eye on Ohio, the nonprofit, nonpartisan Ohio Center for Journalism . Please join our free mailing list as this helps us provide more public service reporting.

Tenants facing eviction in Cleveland Housing Court can access a temporary measure of relief through the current federal moratorium on evictions, and through the city and county’s rental aid programs. But, they’re no silver bullet.

The U.S. Centers for Disease Control and Prevention’s (CDC) eviction moratorium, started on Sept. 1, was meant to pause pandemic-related eviction cases against tenants, to provide a measure of relief during these challenging times.

However,  that relief is only available for a tenant – and anyone else who is on their lease – if they sign the CDC’s eviction moratorium form and give it to their landlord.

Meanwhile, of the roughly $18.1 million in rental assistance funds made available by Cleveland and Cuyahoga County on July 1, less than $2 million has gone out so far to tenants’ landlords to pay for back rent they owe.

Cleveland Housing Court Judge W. Moná  Scott explained how tenants should get the eviction moratorium form to their landlords during a virtual public meeting on Sept. 29.

“That means you can hand deliver (the form), mail it off to them (landlords), you can email it to them,” Scott said.

The forms can be found on the Legal Aid Society of Cleveland’s website (in multiple languages).

However, the eviction moratorium does not relieve tenants of their obligation to pay all the rent they owe once the moratorium expires, Scott and other officials said. Plus, there’s no guarantee that it will fully protect tenants.

Tenants must sign the document, confirming that they are unable to pay their full rent because of a  “substantial loss of household income.” By signing it, they also promise they are using “best efforts” to make payments that are as close to their normal rent as possible, Housing Court Chief Magistrate Tracey S. Gonzalez said during the panel. Tenants also confirm they’ve used “best efforts to obtain all available government assistance for rent or housing” by signing the form.

Landlords can contest those claims in court – requiring a tenant to prove the things they claimed in the form – and if the landlord is successful, a judge can order an eviction.

Scott said she already requires tenants to be in the process of seeking rental assistance in order for the eviction case against them to be postponed through the moratorium.

Scott said in a follow-up interview on Oct. 16 that it’s important for tenants to show up to their hearings because evictions are still happening. The court now has lawyers from the Legal Aid Society of Cleveland present during most eviction hearings to respond immediately if the tenant qualifies for the city’s Right to Counsel program, and those lawyers can also help get the tenant connected to rental assistance.

Meanwhile, plenty of rental assistance is still available locally.  There’s millions left in the roughly $18.1 million pool of rental-assistance money being offered by the city of Cleveland and Cuyahoga County for renters affected by the COVID-19 pandemic. Kevin J. Nowak, executive director of CHN Housing Partners (the nonprofit administering the fund), said that as of Sept. 29, about 6,000 applications for rental aid were submitted to CHN. A CHN spokesperson confirmed that number had jumped to 6,800 by Oct. 12.

That number accounts for about $12.64 million in aid that could end up going out as long as those applications are accepted. Around 2,000 of those applicants had an eviction case filed against them, giving them “priority status” in the application process, Nowak said. In total, about 913 tenants’ landlords have received rental assistance from the city-county program, for a total of almost $1.7 million provided so far out of the $18.1 million.

In other areas, rental assistance funds have run out in a matter of weeks or even days. Nowak said a few factors have led to the rental aid not going out quickly since the program started in July.

“We’ve tried to be as accommodating as possible; you sometimes have a landlord that does not want to accept rental assistance for whatever reason they have,” Nowak explained. “Sometimes you have tenants that may not want to apply.”

Laura Boustani, a spokesperson for CHN, said the number of documents that tenants needed to provide to prove their eligibility was another barrier, so fewer documents are now being required.

“People would start an application, save their work, and then go figure out where the documents are,” she said. “Not being able to find a lease, things like that.”

Another challenge? The rental-assistance program is mainly meant to cover three months’ worth of missed rent, said Boustani. With the pandemic dragging on, many have been unable to go back to work, meaning some have missed more than three months. So, other funding sources need to be pieced together. Recognizing that, the city has extended the amount of aid Cleveland tenants can be eligible for, from three months to four.

Applicants can fill out the forms on paper or through a mobile app, but the main avenue – through the CHN website – requires a reliable Internet source, which can be another barrier for many in Cleveland.

To make matters worse, Cleveland’s city hall has been closed since the pandemic hit, and with it, the city’s Bureau of Vital Statistics, where people would normally be able to stop by to get records they might need to apply for the rental aid. Cleveland Mayor Frank Jackson said during a press conference Friday that requests to that office are taking “much longer” than usual to fulfill because the office is closed, and people need to mail their requests in.

Jackson said the city is renovating that vital statistics offices to make it possible for people to enter into the area with appropriate social distancing, and is working on a process for people to submit requests online.

With the federal moratorium on evictions now in place, it’s up to tenants to fill out the moratorium forms if they can’t afford to pay rent, Scott said.  Eviction cases filed against a tenant for non-financial reasons may still continue.

Jayah J. Watters-Clark, a spokesperson for the Housing Court, said it’s not clear yet how many have been able to postpone their eviction hearings through the CDC moratorium. According to the Eviction Lab project at Princeton University, about 1,700 eviction cases have been filed in Cleveland Housing Court since June.

Despite the pandemic and record levels of unemployment in prior months, Scott said there haven’t been “massive” numbers of evictions filed in Housing Court since the court opened back up in the summer after a hiatus.

“I think it’s because people have taken advantage of rental assistance, and I believe landlords show compassion,” Scott said. “I believe everyone understood the ramifications of the pandemic.”

Conor Morris is a corps member with Report for America. You can email him at cmorris@advance-ohio.com, or find him on Twitter. This story is sponsored by the Northeast Ohio Solutions Journalism Collaborative, composed of 20-plus Northeast Ohio news outlets including Eye on Ohio, which covers the whole state.