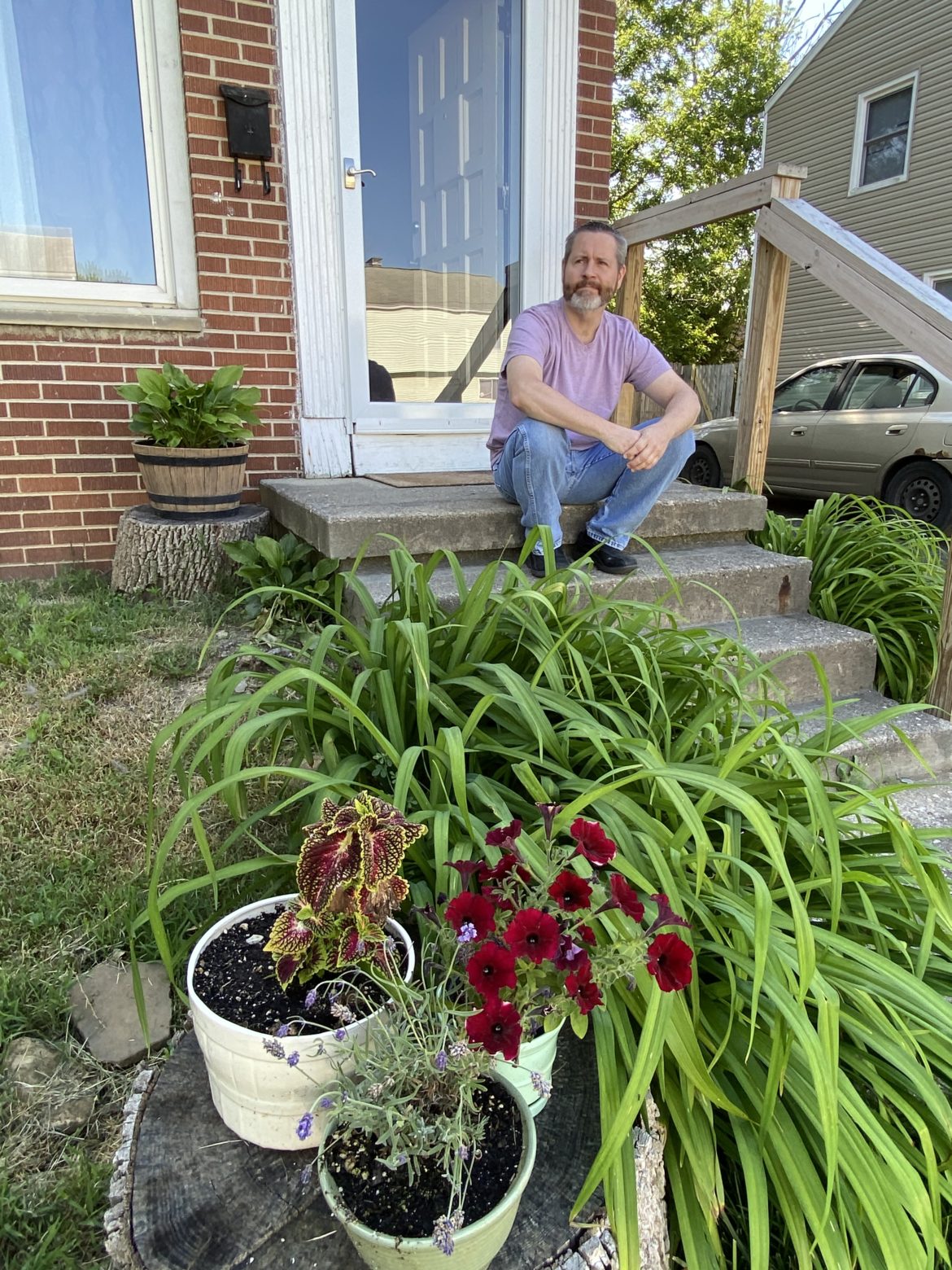 Rodney Sweigert outside his home in Columbus. The single father still hasn't received unemployment insurance for three months and sells plasma to scrape by. (Photo courtesy of Eye on Ohio, the Ohio Center for Journalism)

After waiting weeks for unemployment insurance payments, some are receiving letters demanding they pay back thousands; software troubles continue to dog system

The bill was almost $3,000. She had 45 days to repay it, or the case would be sent to the Ohio Attorney General.

Since March 15, new claims have inundated the unemployment system at a level not seen since The Great Depression. People waited weeks and months to have their claims processed and money disbursed. And an increasing number are being ordered to give it all back. According to ODJFS, since March 15, 23,597 people have accounts listed as overpaid for reasons other than fraud -- about 3.5% of the people who have received benefits.

The department didn’t accuse Behan of lying on her application. The notice officially said it was “non-fraud.” In fact, after the governor ordered all restaurants to close and she lost her job at Buffalo Wild Wings, she had spent weeks arguing to the department that she qualified for payments.

The department had initially ruled that the amount of money she made at the restaurant was too little to qualify for unemployment. She appealed, arguing that if they only counted the weeks she was employed, instead of dividing her income over the whole year, she met the threshold. Finally, the department came around to her way of thinking. She received an approval notice and started getting weekly payments.

It seemed now they had changed their minds. The department declined to comment on her individual case.

“I almost cried,” she said. “I was like, I can’t do this. I fought so long just to get approved in the first place. And it took over a month. I thought I was never going to get paid.”

In the first quarter of 2020, ODJFS had 7,527 non-fraud overpayment cases and 1,347 fraud cases. Between March 15 and May 30, 1,292,413 Ohioans applied for unemployment insurance – as many as applied over the previous three years combined. By May 23, about half of those people had received their first payment.

Rep. John M. Rogers asked ODJFS Director Kim Hall in a May 27 hearing about one of his constituents, Sarah Burns, ordered to pay back all $5,000 she had received in benefits.

The notice sent to Burns, provided by Rogers’ office to Eye on Ohio, says her claim was retroactively denied because she reported earnings for one week, but not the next, and hadn’t explained why. In her appeal, though, she says the department never asked her for additional documentation.

Hall said that problems could easily crop up as the more than 1 million claimants file more paperwork every week.

“When you’re talking about that kind of scale and unfamiliarity with our system,” she said, there are “a host of opportunities for mistakes in your weekly claims attestations and certifications.”

Burns, who lives in Mentor, told Eye on Ohio that she filed all her weekly claims, didn’t work any jobs between being furloughed March 19 and returning to her job on May 26, and doesn’t know why her claim was denied. When the unemployment insurance benefits started coming in April, it was a relief for her and her husband, since he didn’t have to carry the couple’s finances alone. Now, the stress is back on.

“That’s a big chunk of money,” she said, “and it’s not like we can just go to our bank and just take it out, you know? We’re not rich or anything.”

“We are charged by the U.S. Dept. of Labor with maintaining program integrity through audits that judge our ability to distribute the proper amount of benefits to those eligible,” he said via email. “When an overpayment occurs, we owe it to those who need these benefits and Ohio taxpayers to ensure unemployment compensation payments are accurate.”

“Additionally, he wrote, “if benefits are provided to individuals who are not eligible for them, employers can be charged for those benefits, and this can lead to an increase in their tax rates.  When so many businesses are struggling, the last thing we want is to do is increase their tax burden.”

Typically, when workers lose their jobs and file for unemployment, their most recent employer pays part of the tab through increased unemployment insurance tax. When Gov. Mike DeWine ordered restaurants and bars to close on March 15, he declared that the burden for increased unemployment taxes would be “mutualized.” An ODJFS pamphlet says the “mutualized” fund is fed by a tax on all employers, and covers employment claims that can’t be attributed to any individual employer.

Behan says she hopes the demand for repayment was a mistake. She filed an appeal, and the department set a hearing by phone where she can plead her case.

Hall told legislators that as the department finished processing the hundreds of thousands of claims received since mid-March, it was preparing for an onslaught of appeals.

The department’s letter to Behan also suggested another option: apply for Pandemic Unemployment Assistance. PUA is part of a federal program extending unemployment benefits to people who wouldn’t typically qualify, including independent contractors and people whose weekly income was under the UI threshold. To avoid further bogging down the old and overwhelmed unemployment computer system, ODJFS launched a separate online system for people to apply for PUA. That system went live on May 15. By May 30, it logged 209,007 applications.

But that system is running into problems as well.

Locked out of PUA

Rodney Sweigert, a single father who lives in Columbus, said he hasn’t received a single unemployment check yet through the traditional system. He first filed unemployment in mid-March, when the call center where he worked lost most of its clients as their businesses were shut down. That claim was pending for 11 weeks, then the system showed it was inexplicably closed without him receiving a payment. He filed a new claim six weeks ago, but hasn’t received a payment from that claim either.

“I got a letter on [May] 5th saying my claim was allowed, but everything since then has still been pending. So allowed means what? Absolutely nothing,” he said. “At this point it’d be better if they just closed everything so I can file for the pandemic [unemployment assistance],” he said.

But the PUA system won’t let him file a separate application because his UI claim is still open, and he says there’s no option in the online UI portal to close his own claim. He’s heard ODJFS phone operators can quickly close a claim, but when he calls the unemployment hotline number, he can’t reach a human being due to high call volume.

Sweigert said he’s staying afloat by selling blood plasma three times a week, and taking the odd landscaping job he finds on Craigslist. Even so, he’s falling behind on rent, and he’s scared of what will happen when housing courts reopen.

Some people are getting the same denial from PUA, even when their regular unemployment insurance claims have already been denied. Linda Gadek earned part of her income as a 1099 contractor and part of it through wages, but the wages didn’t meet UI’s minimum threshold to be eligible. She filed an application for UI anyway, hoping she would be paid once the department instituted its expanded eligibility.

Instead, her claim was denied by the UI system. But when she applied in the new PUA web portal, she got the same message as Sweigert: she hadn’t exhausted her UI benefits, so she should apply there instead.

The message Andrew Gadek saw when trying to help his mother apply for PUA.

Gadek lost her job on March 21, which means she’s been without an income for more than two months.

Crow initially said that Deloitte, the company managing the PUA system, was working on the issue. But Deloitte spokesman Paul Dunker put the responsibility on ODJFS, saying the department was responsible for providing data on whom should be allowed to apply for PUA.

According to Crow, ODJFS is now going through individual cases to determine who is getting locked out of PUA by mistake.

As of June 9, Linda Gadek’s son Andrew said he still received the error message when he tried to fill out the forms on her behalf.

A phone representative Andrew Gadek reached last week told him his mother is now on the list of people whose cases need to be reviewed so they can apply for PUA. But he has no idea when the change will go through. Other applicants have posted on Facebook that it can take anywhere from 24 hours to six weeks. The ODJFS representative recommended he keep calling every day, and send as many emails to ODJFS as he could.

“Hopefully my mom is now on this list, although there is apparently no way to confirm that she's actually on it, so I am going to email at least once a day,” he wrote in an email. “I don't necessarily see the utility of sending 700 identical emails per day... But maybe that will annoy them to the point of action? I feel like it's more likely to result in them blocking my email address.”

Tens of thousands of Ohioans told to repay unemployment benefits