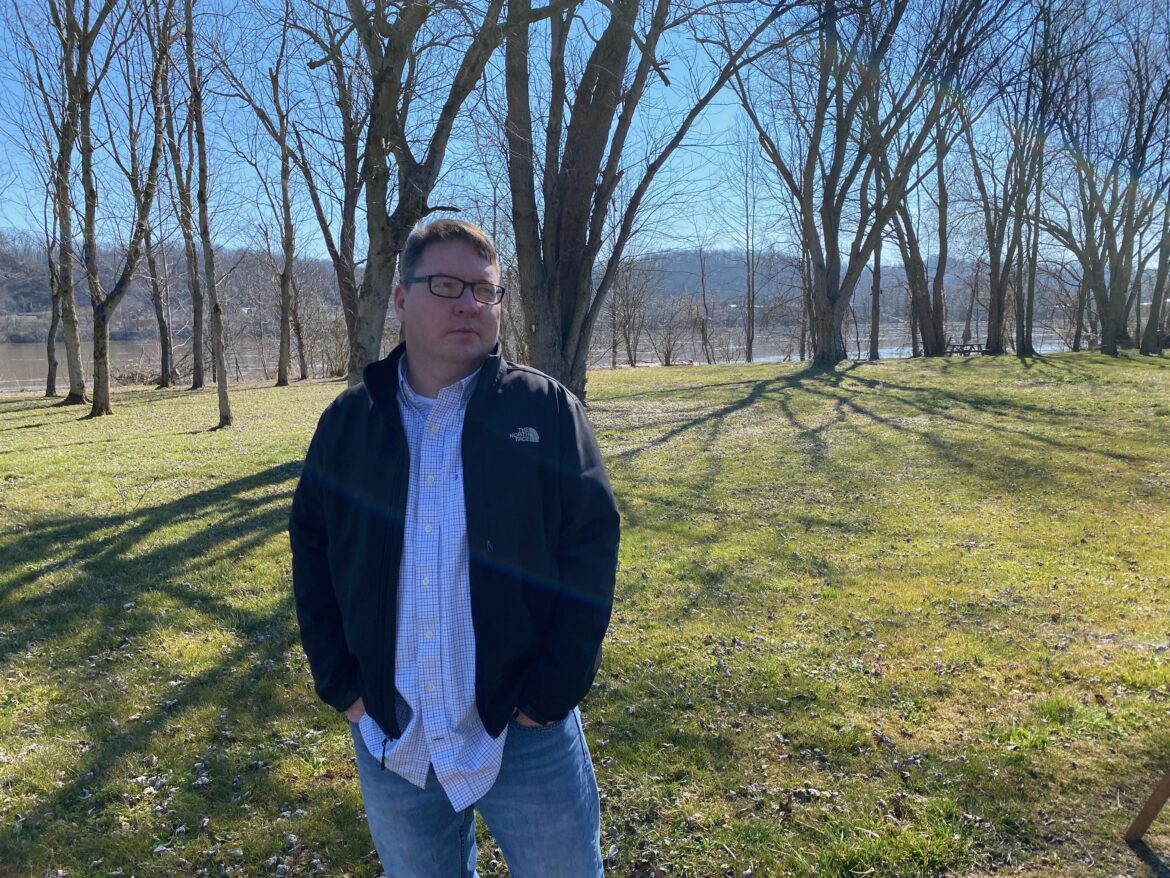 Chris Powers stands in front of the Land Bank lot that he tried to bid on in Southern Ohio. (Photo Credit: Eye on Ohio)

This project provided by Eye on Ohio, the nonprofit, nonpartisan Ohio Center for Journalism. Please join Eye on Ohio's free mailing list as this helps provide more public service reporting to your community.

It was above the Auditor’s appraised value of $3,340. But the Powers really loved the riverfront site. The owner of an adjoining property had let them camp right next to it for years.

So they bid for the wooded parcel, on the northern bank of the Ohio River, as well as an adjoining parcel - not on the river, but just behind it.

The Powers attended a May 18, 2021 land bank meeting. The agenda noted that another bid for the riverfront property had been submitted by Ed Gillespie, who owns more than 30 nearby properties and has close ties to the Mayor.

One official motioned to accept the Powers’ bid, but then Mayor Sam Cramblit asked the Powers to leave the public meeting. They did. Upon their return, they learned that officials “tabled” their request.

Knowing there was now someone else interested in the property, the Powers submitted another bid for the riverfront property, this time for $11,100. Chris Powers said he got a phone call from Land Bank Administrator Tom Schneider on June 9 who encouraged him to lower his bid.

That oddity struck Powers as fishy. He asked how much Gillespie had bid. Schnieder said the bids were not public. To be on the safe side, Powers raised his bid again and offered $11,150 on July 14. Powers  says he called Schnieder the day before a June 17 meeting to make sure everything was in order.

Schnieder later advised Powers that the board had approved giving the parcel to Gillispie for $11,101.50—  $48.50 lower than the Powers’ bid, and coincidentally $1.50 higher than the Powers’ supposedly secret bid. Schnider explained in an email that “due to an inadvertent oversight” the board did not have their new bid.

When the Powers complained, Lawrence County said there was nothing they could do. They also had a new policy. All bids would be submitted by phone, not email. The Land Bank conveyed  the property to Ed Gilliespie and his wife in September 2021.

The Land Bank sent the Powers a notice stating that they should come to the January 2022 Land Bank meeting where they would consider the non-riverfront property. The mailed letter, dated December 23, 2021, asked them to come to a meeting on Jan. 5, 2022.The postmark on the envelope is Jan. 12.

Land Bank Properties in Lawrence County as of January 2021.

On its website, the organization’s mission statement reads, “The Lawrence County Land Reutilization Corporation (The “Land Bank”) revitalizes and strengthens Lawrence County Communities and its rural areas by preserving the current property values through the strategic demolition of abandoned, blighted and tax delinquent properties. Rehabilitating abandoned properties of potentially significant value but that are otherwise none [sic] productive due to abandonment and returns or recirculates these properties into productive use through a transparent, public and community oriented process.”

A year-long investigation by Eye on Ohio paints a different picture. By combing through hundreds of property and tax records, most not online, and combining results  with machine learning methods, reporters found that a combination of the property’s size, taxes owed, how long the property had been abandoned, and its distance to the river could predict remediated properties 89% of the time.

A lesser  distance to the river was among the most important contributors to the model, not counting properties certified delinquent in the past two years (when covid temporarily altered the foreclosure process). Being closer to the river and owing less money actually made properties more likely to enter the land bank. For example, a tax-delinquent property within 0.27 miles of the Ohio River had a 24% chance of remediation in the prediction versus properties further away, which only had a 9 percent chance.

A look inside the computer model to predict Land Bank remediation.

Note: This does not include properties delinquent from 2020 on, when Covid temporarily altered the foreclosure process. (Graphic Credit: Eye on Ohio.)

In hard-hit Lawrence County, there is no shortage of blighted properties. But some land-bank parcels did not need rehabilitation - such as the undeveloped riverfront lot the Powers tried to buy.

Lawrence County has approximately 5,000 properties on its certified delinquent list. Almost 400 properties have gone through the land bank.

About two-thirds of delinquent properties were in arrears for less than $1,000. Most properties are not behind for more than a couple years. Among those owing more, however, property owners failed to pay taxes for 9.6 years, on average. One property had not paid since 1981.

And remediated properties were not among the most egregious debtors. Nearly 90% of land bank properties owed less than $5,000.

Local officials provided responses to public records act requests, such as the county’s acquisition policy, but did not respond to several follow up questions. The Gillespies declined to comment by phone. An email they used to request the property is no longer in service.

Ohio passed special legislation for county land banks in 2006, and the mortgage crisis of 2008 made many Ohio counties enthusiastic adopters of the model. Fast-track foreclosure policies have been key to stabilizing housing prices in some areas but critics argue it gives county officials too much leeway in deciding who gets rehabilitated when there will never be enough funding to remediate every decrepit property in the Rust Belt.

Last year, Eye on Ohio published its first look at Land Banks using machine-learning methods. Certain factors such as a parcel’s proximity to valuable properties or its school district made it more likely to be picked for remediation in  six counties. In some places, officials responsible for economic recovery also are in charge of property remediation.

Al Jenkins, standing in the side lot he cannot buy, showing a picture from his Land Bank application.

His house is in the background. (Photo credit: Eye on Ohio)

When Al Jenkins moved north from Georgia, he remembers the date well: it was November 22, 1963, the day President John F. Kennedy was shot. The country was in an uproar, and he was panicking as well, fleeing escalating race violence that then gripped the South.

He remembered with a twinge of regret a friend who owned a gas station. When Jenkins visited home 2 years later, the friend asked him to come back.

“They found his body in that station,” Jenkins said, his voice low.

Upon arrival in Cleveland, Jenkins spent a year as a janitor at a hospital then found full-time work at a factory. He bought his first property downtown in 1985 and fixed it up. He eventually invested in several more properties in the area and rented them out. In Cleveland, Jenkins could control his own destiny. Or at least he could until recently.

The one property Jenkins does not own is the side lot next to his house that he cleaned up, landscaped, and fenced. Even a year after the initial story surfaced, the city still will not sell him that side lot.

According to a city official: “We do sell side yards and we have a fairly robust program. That said, there are areas in the city where we aggregate land for future development. The Upper Chester area (between Chester and Hough) is one such area where there has been a lot of recent interest. This is the reason Mr. Jenkins’ request was denied in April 2020 – because this side yard is in a location proposed for redevelopment, specifically in-fill housing with some interested parties looking to develop low-income housing.”

The city did not answer further questions about the lot, such as who, exactly, is interested in it and why Jenkins cannot be among them. They offered to lease him the property until further development. He declined.

This project was supported by the Data-Driven Reporting Project.

Sidebar: What is Artificial Intelligence and why use it to look at public records?

A scooped-up side lot and the riverfront parcel that mysteriously got away: How rules written for distressed  ‘Rust Belt’ property may benefit a select few

2 thoughts on “A scooped-up side lot and the riverfront parcel that mysteriously got away: How rules written for distressed  ‘Rust Belt’ property may benefit a select few”