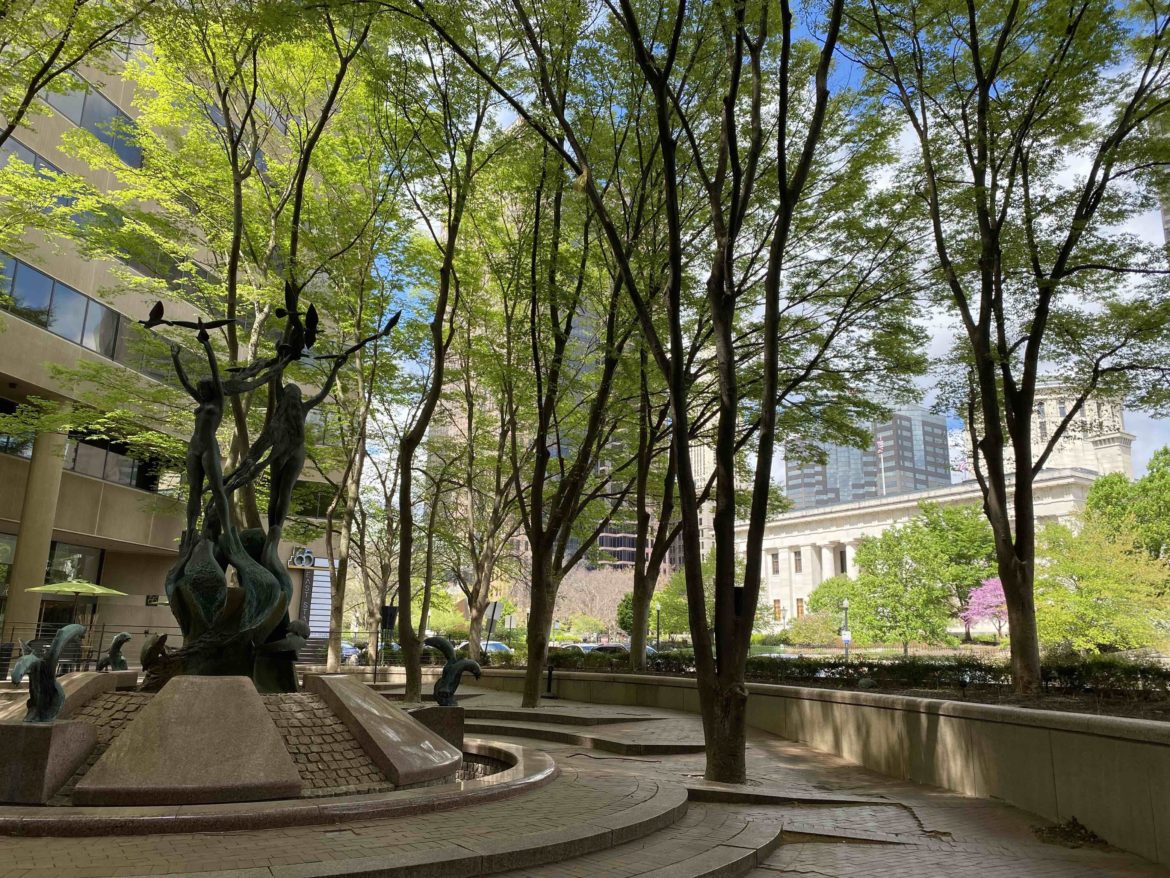 Right across the street from the Statehouse, Generation Now's former offices promised easy access to the politicians at the heart of the HB6 scandal. (Photo courtesy Eye on Ohio/Energy News Network)

The company’s broad view of its ongoing investigation for purposes of limiting public disclosures seems at odds with its narrow view and piecemeal approach to regulatory proceedings.

Complete disclosures are still not forthcoming from FirstEnergy, Energy Harbor and others who may have played roles in an alleged conspiracy that funneled millions of dollars to former Ohio House Speaker Larry Householder in order to elect lawmakers sympathetic to House Bill 6, pass the law and then prevent voters from having a chance to reject the law in a statewide referendum.

FirstEnergy President and CEO Steven Strah said at the company’s Feb. 18 earnings call that the company is now “deeply committed to creating a culture in which … our leaders prioritize and encourage open and transparent communications with all of our stakeholders.” Strah became acting CEO last October and was formally appointed to the position on March 8, replacing Chuck Jones, who was fired for violating “certain FirstEnergy policies and its code of conduct.”

Yet there continues to be a clash between that stated commitment and what the company has actually disclosed. In particular, the company still has not provided full details about its various contributions to dark money groups that funneled money to the Republican Governors Association, Generation Now, campaigns for Gov. Mike DeWine and his daughter, and others.

The company likewise has not provided a copy of a purported agreement made with an entity linked to former Public Utilities Commission Chair Sam Randazzo, ostensibly going back to 2013. A $4 million payment for the stated purpose of ending that agreement was among the reasons Jones and others were dismissed.

Nor has FirstEnergy provided full details about other transactions noted in that filing, “which in some instances, extended back ten years or more, including vendor services, that were either improperly classified, misallocated to certain of the Utilities or Transmission Companies, or lacked proper supporting documentation.”

Asked how to reconcile the lack of explanations with a commitment to transparency, FirstEnergy spokesperson Jennifer Young repeated the company leadership’s commitment “to sharing all the information we can, when we are able to share it. However, because of the ongoing investigations, there remains information we are unable to share at this time, including that related to contributions.”

Aside from the money that might have gone to Generation Now, Partners for Progress, or the Coalition for Growth & Opportunity, other contributions are not obviously related to pending litigation involving HB 6.

Civil lawsuits against FirstEnergy, Energy Harbor and others have in part been stayed pending resolution of the criminal case. Householder and former Ohio Republican Party chair and lobbyist Matt Borges have yet to face trial. Co-defendants Generation Now, its president Jeff Longstreth and lobbyist Juan Cespedes have pled guilty. The sixth co-defendant, Neil Clark, was found dead near a pond in Collier County, Florida, on March 15.

Stays of civil litigation are sometimes granted in similar cases so defendants won’t risk incriminating themselves while defending against the civil charges, although parties remain free to avoid testifying or responding to various discovery questions under the Fifth Amendment. Neither FirstEnergy nor any of its current or former officers are named as defendants in the federal criminal case against Householder, although federal investigations are ongoing.

Energy Harbor and its officers likewise have not been named as criminal defendants at this time. Company spokespeople did not respond to multiple requests for comment for this story. The company only allows access to financial reports to registered shareholders.

While FirstEnergy must provide periodic reports to the Securities and Exchange Commission, Energy Harbor avoids reporting. Following its emergence from the FirstEnergy Solutions bankruptcy and full separation from FirstEnergy, the company’s shares have been traded over the counter as a “pink sheet” listing, and not on any major stock exchange. Company shares fell precipitously after news of the Householder arrest, have had an up-and-down performance, and have yet to recover fully, Seeking Alpha data shows.

Meanwhile, FirstEnergy, Energy Harbor and their current and former officers have generally not had to respond to discovery in pending civil lawsuits. The March 31 repeal of HB 6’s nuclear subsidies and guaranteed revenue provisions may make certain cases moot, including cases brought by the Ohio Attorney General and cases brought by some cities on behalf of ratepayers who live there. Shareholder cases against FirstEnergy likely will continue.

Several regulatory cases remain open with respect to whether FirstEnergy used money from ratepayers for political and charitable activities related to HB 6. The company’s annual report for shareholders filed in February noted that the Federal Energy Regulatory Commission has directed the company to retain all records relating to an ongoing audit and activities concerning HB 6. And despite an announced settlement to return about $26 million in decoupling revenues that were previously collected, FirstEnergy’s utilities will continue to face at least three regulatory cases before the Public Utilities Commission of Ohio.

After a five-month delay, lawyers for the Office of the Ohio Consumers’ Counsel finally were able to conduct a deposition in one of those cases. A deposition lets lawyers ask pretrial or prehearing questions of a witness under oath. That particular regulatory case began specifically to see if Ohio ratepayer money was spent on activities related to HB 6. Witness Santino Fanelli had provided a conclusory affidavit last fall to support the company’s claim that ratepayers didn’t pay rates, riders or charges that included HB 6 costs.

Basically, Fanelli’s affidavit said that couldn’t have happened because the rates, riders or charges weren’t designed for that purpose or weren’t included in accounts for HB 6 costs. But then the company’s written discovery responses said it couldn’t admit or deny what happened to money collected for various purposes after it went from utilities to FirstEnergy Service Company.

“I’m not aware of costs incurred by the utilities for any political or charitable spending payments that have been determined to be in support of House Bill 6,” Fanelli said multiple times during the two-day deposition on March 9 and 10. When asked about amounts improperly charged to ratepayers, as disclosed in the company’s February SEC filing, Fanelli did note that costs allocated to Ohio utilities and their ratepayers included amounts that went to Generation Now and Hardworking Ohioans, identified as “Dark Money Group 1” in the federal complaint.

“My understanding is that there’s been no conclusion reached determining that those costs are in support of HB 6,” Fanelli said, noting that the timing also preceded HB 6. FirstEnergy’s lawyers objected to various questions about what happened to funds from a credit support rider that later was found unlawful, as well as questions about how various executives’ time would have been charged to utilities.

A call to PUCO hearing examiner Gregory Price clarified that the relevant time frame was from January 2017 onward. However, Price ruled against requiring Fanelli to answer questions about the credit support rider or other matters being dealt with in parallel PUCO proceedings or audits. He later repeated those positions at a March 25 hearing, suggesting that he did not want to interfere with the federal investigation in which FirstEnergy is not a named defendant.

“Geez, how much can you piecemeal this thing to death?” said Dave Anderson, policy and communications director for the Energy and Policy Institute, after reading an unsigned transcript of the deposition.

Compartmentalizing the issues risks that some facts may not surface or that people won’t be able to connect related facts, Anderson said. “It’s hard to see how they could get a full picture of how consumers’ money might have been spent.”

Having separate issues dealt with in multiple cases also will draw out the time for resolution of the HB 6 scandal. On April 7, the PUCO reissued a December 2020 request for proposals to audit how FirstEnergy spent nearly half a billion dollars collected from ratepayers for an unlawful but nonrefundable no-strings-attached credit support rider. An insufficient number of proposals had been received, the PUCO’s order noted.

Spending the rider money was probably separate from the improper charges noted in FirstEnergy’s February SEC filing. Those charges likely were reported to the Federal Regulatory Exchange Commission as part of a catch-all contractor category known as Account 923, Anderson said.

There may well be more charges that ratepayers should not have paid. Anderson has estimated that 13 of the company’s utilities had paid $144 million for external affairs support over the course of three years. That category could have included a broad range of work on state and federal affairs, energy and market policy, corporate affairs, regulatory affairs, community development, and economic development, according to a 2018 audit of FirstEnergy’s practices for corporate separation.

All of these different services were overseen by Michael Dowling, the former head of external affairs, who was terminated at the same time as Jones, Anderson said.

FirstEnergy’s recent disclosures, plus an ongoing FERC audit of FirstEnergy, raise questions about what else might be discovered — and when.

“It certainly seems like this is reaching a point where it goes far beyond [HB 6] to what FirstEnergy may have used customer money for inappropriately going back many years,” Anderson said.

This story is part of a collaborative journalism project produced by the Energy News Network and Eye on Ohio, the Ohio Center for Investigative Journalism. Funding is provided by the Cleveland Foundation, the George Gund Foundation.