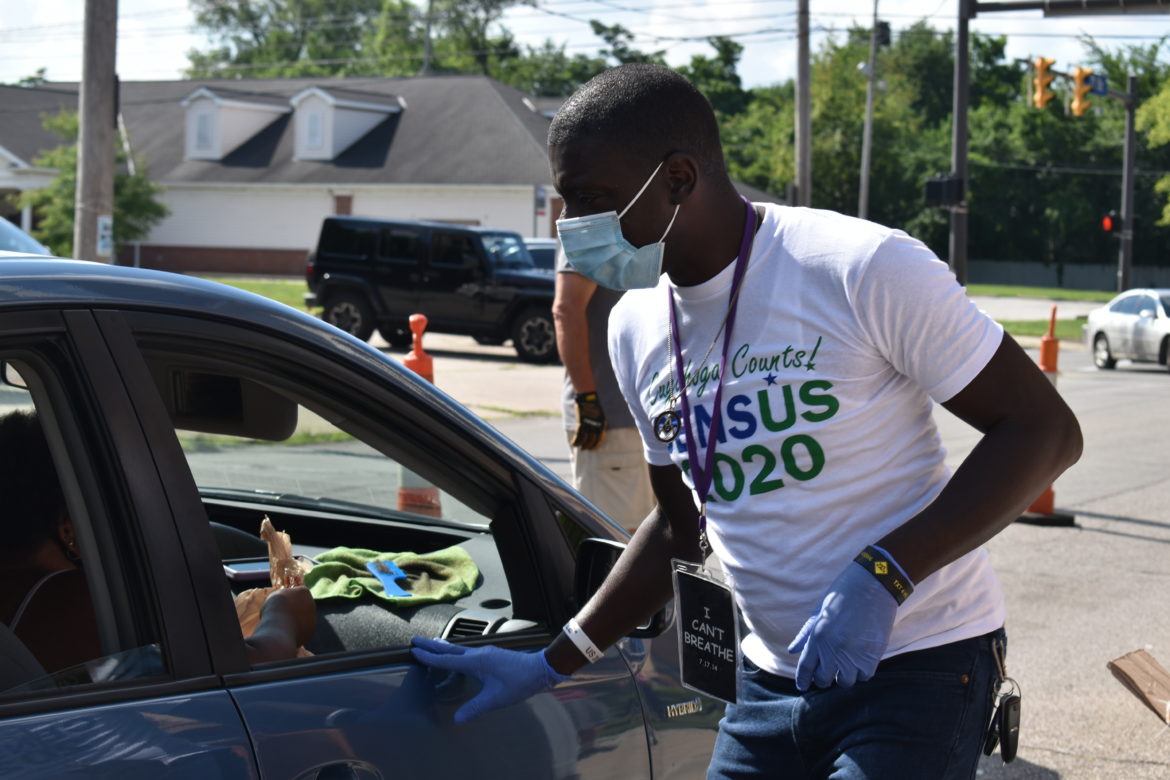 Billy L. Sharp, guild president of the Urban League Guild of Greater Cleveland, hands out food and information on the Census during a food bank event at Mt. Gillion Baptist Church in central Cleveland in mid-July. Photo by Conor Morris.

When Ohio Governor Mike DeWine issued the statewide coronavirus stay-at-home order in mid-March, Selina Pagan and other Latino leaders in Cleveland were worried.

They’d been planning in-person events to get more people to participate in the 2020 census – historically, Hispanics have been undercounted, resulting in a loss of federal funds and voting power at the local level. But, when everything was canceled, months and years of planning were suddenly tossed out the window.

Pagan, who is president of the Young Latino Network in Cleveland, came up with a new idea when she came across a video online: “I saw a Puerto Rican pickup truck with a speaker strapped onto the back playing a loop announcing the stay-at-home order, and I thought, ‘That’s a pretty cool way to get your message across – how do we do that in our community?’”

She pitched the idea of doing something similar locally on a phone call with other voting and census outreach organizers, and the Cleveland Caravan (or La Caravana) was born.

At the inaugural caravan, held the first week in April, a pickup truck followed by dozens of cars wove through the densely-built streets of the Clark-Fulton neighborhood on Cleveland’s near West Side, which has a large Latino population. A speaker on the back played a looped message in English and Spanish about how to respond to the Census, vote and keep safe during the Covid-19 pandemic. Organizers walked alongside the caravan passing out information to people on their porches and outside of businesses.

“It’s hard to get our community to participate,” Pagan said of the outreach, which is difficult under ordinary circumstances and was made more complicated by the pandemic. “These are systems they either don’t trust or they’re not familiar with. We’re getting people to learn about how the system works and how the structure works, how we have power in numbers as a community that gets counted and in our vote.”

Since April, Pagan and other activists have organized the caravan monthly. Inspired by their efforts, organizers have held separate caravans in the Buckeye neighborhood and the city of Lorain. At the August caravan, organizers collected 78 vote-by-mail applications and 54 voter registration forms. “These numbers may not seem like much, but they’re the largest one-day totals yet,” says Pagan.

Doing outreach in a pandemic

Cities like Cleveland are historically undercounted in the U.S. census because they have higher numbers of hard-to-reach groups – low-income people, communities of color, homeless people and immigrants, said Kate Warren, a research associate with the Center for Community Solutions who studies Census data regularly.

An accurate count is important because it is used to determine whether Cleveland gets its fair share of more than $675 billion in federal funds for schools, hospitals, roads and other programs. It’s also used to allocate Congressional seats and for business groups and developers to decide where to locate jobs and new development. According to U.S. census data population estimates, the city of Cleveland has also seen a significant reduction in its population size, from 396,815 in 2010 to 381,009 in 2019.

The census had already become politicized when President Trump proposed adding a citizenship question in 2019, raising concerns that it would be used to intimidate immigrant respondents or punish districts with high noncitizen populations. Even though the administration later dropped that effort when the Supreme Court ruled against it, some damage had already been done, according to advocates.

When Ohio’s shutdown occurred in March, community groups began scrambling to find new ways to reach people. Filling out the census online isn’t an option for people who don’t have Internet access – Cleveland is the fourth worst-connected city in the country, according to some estimates, a separate problem advocates are working to fix – so they knew they had to do something different.

“Historically, black and brown communities have been disproportionately impacted by undercounts,” says Erika Anthony, director of Cleveland Votes, which is part of the Ohio Census Advocacy Coalition and has given grants to 30-plus agencies to support Census outreach work. “There is a tremendous fear for persons of color when it comes to the government. We’ve got to re-imagine how we do this.”

The recent decision to shorten the Census by an entire month (from October 31st to September 30th) added a whole new level of urgency. With 38 million households still uncounted, according to a recent article in the New York Times, advocates everywhere fear a historic undercount.

So, Cleveland groups began looking at new ways to reach people, from outdoor events to going to food banks where people were congregating during the crisis. So far this year, the Cleveland Foundation, in partnership with Cleveland Votes and other foundations, has provided about $200,000 in micro-grants toward community outreach projects aimed at improving Greater Cleveland’s census response. One more round of grants is on the way later this month or early in September. As of the third wave of funding, a total of 75 micro-grants ranging from $1,000 to $5,000 were issued to dozens of community organizations.

Juan Galeano, project consultant for the 2020 Census for the Cleveland Foundation, said that due to the pandemic, the number of micro-grant rounds went from two to four and he organized virtual town halls with their partners. The point was to help the area’s community organizations build up their “civic engagement” muscles and improve outreach to hard-to-count groups. Community organizations that already have the trust of those groups are key, he said.

Asian Services in Action (ASIA) is one Cleveland-based organization that received a micro-grant (for about $2,500.) Elaine Tso, CEO of ASIA, said her nonprofit has been making “well calls” to members of the Asian and Pacific-Islander community, both to check in on how they’re doing during the pandemic and to offer aid in completing the Census. As of mid-July, ASIA had helped 1,190 people complete their census forms.

A big thing ASIA brought to the table was staffers being able to talk to people in their own language. “Across our staff, I believe at last count there were 27 (language fluencies,)” Tso said, with the top five being Chinese, Nepalese, Burmese, Swahili and Karen.

Refugee and immigrant services nonprofit Us Together also received three micro-grants from the Cleveland Foundation, totalling about $12,500. Senior case worker Luda Pinchuk has been heading up a lot of the outreach funded by the micro-grants, specifically toward resettled Ukranian refugees. She said she went back through five years of her case files, and talked to those families about the census, helping many of them complete the forms. She estimates she’s reached about 120 families and their extended families, for a total of about 700 people.

Pinchuk, who speaks Ukranian, Russian and Polish, said this is a group of people who do not trust the government easily, so many would not have been filling out the Census.

“These people are thinking this is a government conspiracy on them,” Pinchuk said. “I explained why we have to have a proper headcount and how we benefit from it.”

Meeting people where they are

The Urban League Guild of Greater Cleveland was another organization that had long prepared for the Census, only to have things turned upside down by the pandemic. During one sunny Saturday morning in late July, Guild President Billy L. Sharp joined the congregation at Mt. Gillion Baptist Church for a drive-up food distribution event from the Greater Cleveland Food Bank, where they handed out census information and census-branded tote bags and water bottles along with the food.

“Food banks, grocery stores, gas stations, we try our best to meet them (undercounted groups) there,” Sharp explained of the Guild’s efforts to get the word out.

The idea of meeting people where they live and the places they frequent is an important part of the strategy for census outreach, Sharp said. For example, Galeano said Cleveland nonprofit Smart Development is partnering with immigrant-owned grocery stores, mosques and other places where “diverse groups” congregate to canvass those locations for the Census, using iPads to help people fill it out on the spot. The Cleveland Task Force to Declare Racism a Public Health Crisis — led by community leaders with the Urban League, YWCA of Greater Cleveland, and the NAACP, among others — is also setting up neighborhood stations with laptops two times per week until the end of September.

Simeon Best, program administrator of Cuyahoga Counts, said the county is also using its outreach van to do census canvassing at food distribution centers, Dave’s Supermarket locations, and even library parking lots that have wi-fi. “Just being out there helps. We run into people who say, ‘I meant to do that,’ and we can tell them, ‘Well, do it now - you can do it on your phone.’”

Despite these efforts, the city of Cleveland is still lagging behind on its  response rate. It was 68th out of 68 large metro areas for its Census response rate in July. As of August 20th, Cleveland had a response rate of 48.2 percent and was still stuck behind most other big cities, including Detroit, Miami and Rochester, New York. Cuyahoga County’s rate was 64.2 percent, and Ohio’s rate was 64.6 percent. Some lower-income census tracts and communities of color in the city, especially on the East Side and impoverished areas in the West Side, have a response rate below 30 percent.

Kate Warren, with the Center for Community Solutions, said it’s difficult to track whether the various outreach efforts are working. Just judging from the Census Bureau’s map tracking self-response rates, there’s only been a “very slow tick-up in Cleveland.”

Galeano, with the Cleveland Foundation, said he believes groups like ASIA, Inc. and Us Together have seen some success based on the number of people they’ve helped to complete the census. Pagan says that although the numbers are small, she thinks her group has done a good job reaching people.

Anthony says that she’s hopeful that people will emerge from this crisis with a better sense of how to reach hard-to-count groups.  After all, if they’re successful at reaching people during a pandemic, during normal times their “civic engagement muscles” will be bulging.

“If there’s a silver lining, it’s the efforts of people to adapt during the pandemic,” she says. “People have been incredibly resilient during these challenging times. They’ve leaned in and figured it out.”

This story is sponsored by the Northeast Ohio Solutions Journalism Collaborative, composed of 18-plus Greater Cleveland news outlets including Eye on Ohio, which covers the whole state. Lee Chilcote is founder and editor of The Land, and Conor Morris is a corps member with Report for America.

Grounded by the pandemic, community groups work to save Cleveland’s census