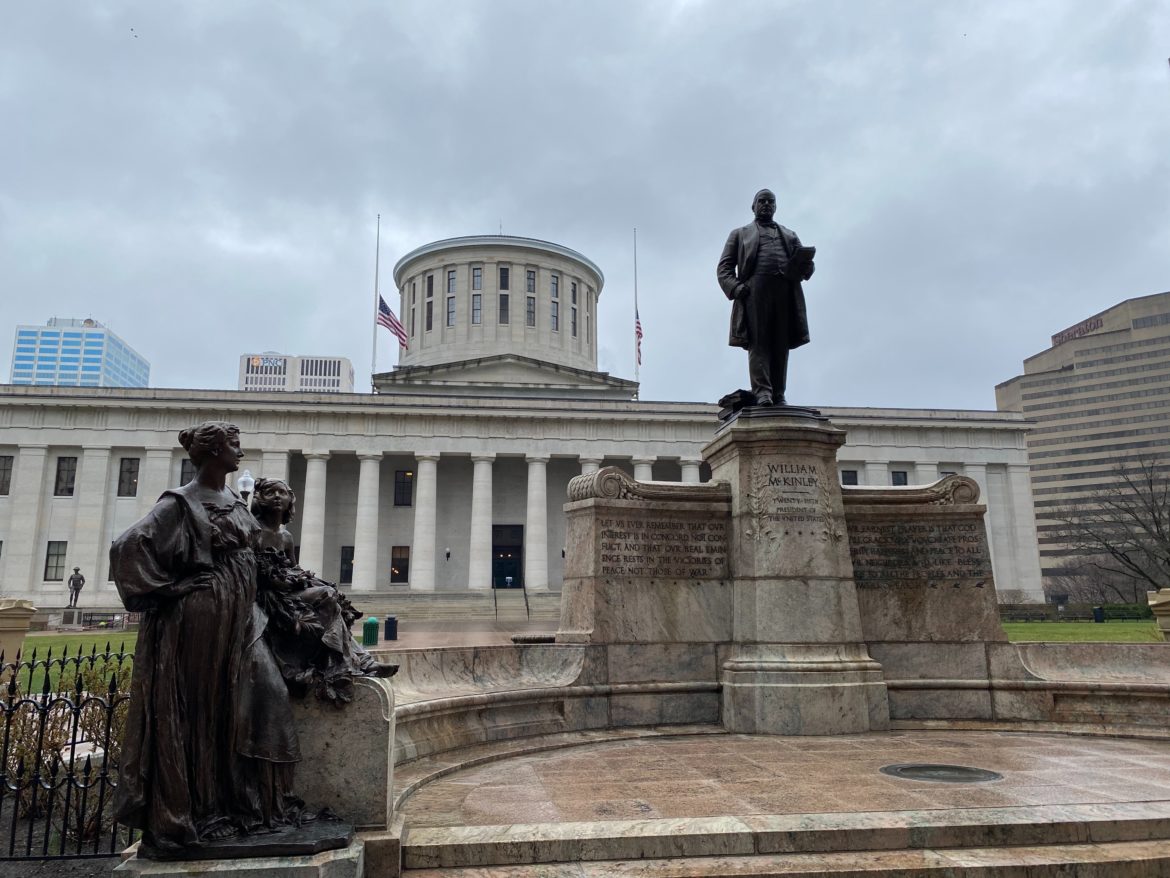 Here’s what’s at stake as Ohio lawmakers debate whether and how to repeal the bailout law at the heart of an alleged $60 million conspiracy case.

A bill to repeal Ohio’s nuclear bailout law has languished for more than a month so far, and signs suggest that House leadership may be angling to defer or stop such efforts as Election Day draws near. Lawmakers filed repeal bills soon after the arrest of former speaker Larry Householder (R-Glenford) and others in July.

Starting in January, House Bill 6 will require ratepayers to pay approximately $1 billion over the course of six years for subsidies that FirstEnergy had sought for two Ohio nuclear plants. Yet more is at stake, even beyond the $7 average increase in monthly energy spending that some advocates forecast as a result of the law.

The federal indictment claims that approximately $60 million for an alleged unlawful enterprise came from “Company A” and affiliates “in return for legislation that would save the operation of the Nuclear Plants” in the state. Federal prosecutors have charged Householder and others with an alleged conspiracy involving the unlawful solicitation and use of funds for the election of sympathetic lawmakers, Householder’s rise to House speaker, passage of House Bill 6, and the defeat of a referendum effort last year. Federal prosecutors claim that the various actions violated the Racketeer Influenced and Corrupt Organizations Act.

Only about $3 million of the total could be traced from FirstEnergy Solutions and other entities before the federal complaint was released on July 21. The rest was dark money — funding to influence political action whose origin can’t readily be traced.

Rep. Mike Skindell (D-Lakewood) and Rep. Michael O’Brien (D-Warren) introduced HB 738 on July 29. Lawmakers in the group attempted on August 31 to file a motion to compel a floor vote. The effort was thwarted by the House clerk’s insistence on in-person signatures, even though electronic signatures have been accepted for other purposes during the COVID-19 pandemic.

That same day new House Speaker Robert Cupp announced plans for a House Select Committee on Energy and Policy Oversight, to which that and other bills would be referred, but without a specific timeline. “Our goal is to have an open and thorough process for repealing House Bill 6 and replacing it with thoughtful legislation Ohioans can have confidence in,” Cupp said in a press release.

Skindell, who has decried HB 6 as  a “corrupt piece of legislation,” said the new committee creation was basically just “a bureaucratic slowdown of the repeal process.”

“We don’t need to study it,” said Rep. David Leland (D-Columbus), referring to hundreds of hours of testimony on the bill from last year. “We need to repeal it. We need to send a strong message to everybody, loud and clear, that Ohio is not for sale.”

HB 738’s cosponsors include more than three dozen lawmakers from both the Republican and Democratic parties. Other lawmakers, however, have defended the law, including both co-sponsor Jaime Callender (R-Concord) and House Majority Floor Leader Bill Seitz (R-Cincinnati). There has also been some talk of a repeal with a delayed effective date, but Seitz said he opposes that as well.

“Ohioans deserve honest government,” said Dan Sawmiller, Ohio energy policy director at the Natural Resources Defense Council. “The only way to provide confidence in that is to advance a full and complete repeal of House Bill 6 immediately.”

But the bill’s costs will also certainly play a part in the debates.

Here’s a breakdown of projections.

Approximately $1 billion in ratepayer charges would subsidize the Davis-Besse and Perry nuclear plants in Ohio.

The law authorizes $150 million per year from 2021 through 2027 for the two nuclear plants now owned by Energy Harbor, which is the renamed company that emerged from the FirstEnergy Solutions bankruptcy in February.

“There will be no significant impacts to FirstEnergy if HB 6 is repealed and not replaced,” said FirstEnergy spokesperson Mark Durbin. The company has said it is now independent of Energy Harbor and has denied any wrongdoing related to the alleged criminal conspiracy.

Yet FirstEnergy may already have reaped huge benefits from the law. As a major secured creditor of FirstEnergy Solutions when the bankruptcy case began, the company presumably had a business interest in a successful reorganization. Previously, FirstEnergy had said the plants would close without subsidies. And HB 6 arguably helped the company separate itself from most of its former financial burdens.

FirstEnergy also has at least an indirect interest in the ongoing financial viability of the nuclear plants. Under an April 2019 revision to the plan for reorganization, there might still be some financial exposure for environmental cleanup if Energy Harbor fails to meet its obligations.

Bill riders can subsidize up to $450 million for electricity from one 1950s-era coal plant in Ohio and another in Indiana.

House Bill 6 authorizes charges of up to $1.50 per month through 2030 for utilities to pay for electricity from two Ohio Valley Electric Corporation coal plants. Customer charges for the OVEC plants could come to about $450 million.

HB 6 let utilities collect the OVEC riders starting in January. Customers of American Electric Power, Duke Energy and Dayton Power and Light had already been paying subsidies for those plants under prior rate plans. FirstEnergy Solutions’ bankruptcy had let it back out of its prior OVEC obligations, but FirstEnergy’s utility customers are now paying charges as well.

A repeal of HB 6 might not immediately invalidate the charges, according to attorneys Madeline Fleisher and Terrence O’Donnell at Dickinson Wright in Columbus. Some regulatory action might be necessary to revise utility rates, and regulators’ response is uncertain. Anything paid so far would not be refunded, based on prior Ohio Supreme Court rulings.

A handful of grandfathered solar projects would get $140 million.

HB 6 authorized up to $20 million per year for a handful of solar projects that had already gotten permits. Charges for those projects don’t kick in until 2021. Other new solar or wind projects do not get any funds.

Separate provisions in HB 6 allow utilities to ask regulators to let them collect revenues pegged to 2018 levels— at least until their next major rate plan. The 2018 rates generally included a rider for lost profits that utilities would otherwise have given up due to energy efficiency. But now utilities aren’t required to provide those programs after this year.

“From the standpoint of businesses and households affected by this, they could end up getting charged for energy efficiency and not receiving it,” said Noah Dormady, an energy and economic policy analyst at The Ohio State University. “In other words, they could be paying for efficiency but not receiving any of the benefits.” Utility rate plans, including those from 2018, also have some built-in cross-subsidies, which may flow to unregulated parent or affiliate companies.

The average additional decoupling charge for FirstEnergy customers is about $0.67 per month, according to the Ohio Environmental Council. FirstEnergy President and CEO Chuck Jones acknowledged that the decoupling provision helped cushion the impact of the 2020 pandemic when he gave this year’s first quarter results.

Bill charges for Ohio’s clean energy standards are removed, but so are cost savings.

HB 6 removed any additional energy efficiency requirements after 2020. HB also scaled back the renewable energy portfolio standard so the top target to be achieved by 2026 is now 8.5% of annual electricity generation, instead of 12.5%. However, the baseline for calculating each year’s total generation now won’t count various large industrial users.

A May 22 memo from economist Russ Keller at the Ohio Legislative Service Commission claims that the cumulative cost savings from cutting customer charges for the clean energy programs would be about $2.36 billion through 2030. The memo was addressed to advisor Pat Tully of the House Majority Caucus.

“More charges were cut than were added,” said Seitz in defense of HB 6. Seitz has long sought to limit or gut Ohio’s renewable energy and energy efficiency standards.

Keller’s calculations left out any benefits that would have been gained from keeping the standards in place. Prior law imposed a cost-effectiveness requirement on charges for utilities’ energy efficiency programs. The programs had to save consumers more overall than their cost.

So, focusing only on the cost of those programs gives a “skewed and inaccurate view” of energy efficiency, Sawmiller said. “Energy efficiency has saved Ohioans over $7 billion to date. It’s a no-brainer.”

The Ohio Environmental Council and Environmental Law & Policy Center found that those savings averaged $7.71 per month, based on 2017 utility reports. And that amount doesn’t include additional savings due to energy efficiency’s impacts on the electricity market, which averaged another $2 per month, according to a 2019 report prepared for the organizations.

Using just the $7.71 savings figure, the Ohio Environmental Council estimates that the average residential customer’s net spending for electricity will be $7.01 more per month with HB 6 than without it.

Repeal backers say HB 6 will cause Ohio to lose jobs and economic opportunities.

“HB 6 threatens the gains we’ve made in adding more than 114,000 good-paying clean energy jobs and the economic livelihood of Ohioans working in those jobs,” says Leppla. That number comes from data released in June by Environmental Entrepreneurs and the Clean Energy Trust.

The law “also threatens future growth of this critical sector and our fight against the ever-increasing impacts of climate change on Ohio communities,” Leppla continued. Companies in the clean energy sector would invest elsewhere instead, advocates say.

The law also discourages investments from other companies that want renewable energy as part of their business goals, repeal backers add. Other legislative actions since 2012 have also had impacts, including a 2014 law that tripled property line setbacks for wind turbines.

If Ohio’s policies were welcoming to clean energy, the state could add 20,000 new jobs and attract $25 billion in investments over the course of two decades, according to a 2018 report by Synapse Energy Economics of Cambridge, Mass. Funding for that report came from the Environmental Defense Fund, with input from various businesses and research groups.

HB 6 will also have some health and environmental costs.

“If Ohio’s renewable energy and efficiency standards aren’t reinstated, Ohioans will experience dirtier air, and we won’t receive the projected health benefits that these standards provide — prevention of over 44,000 asthma attacks, 4,400 heart attacks, over 2,800 premature deaths and more — all attributable to coal-plant pollution.” Leppla said.

The figures come from a 2015 report prepared for the Natural Resources Defense Council, Ohio Environmental Council, Environmental Law & Policy Center, and the League of Conservation Voters. Leppla noted that the subsidies make it easier for the Sammis coal plant to stay open past 2022.

For now, the timeline to repeal HB 6 — if at all — remains uncertain. And it’s unclear whether any definitive action will take place before in-person and mail-in voting starts in Ohio on October 6.

If a repeal doesn’t take place before voting starts, Leland said, “it sends a message that corruption is okay in Ohio.”

“Ohio, and the rest of the world, continue to grapple with a pandemic that is having devastating impacts on our economy, as well as our health,” Sawmiller said. “The state’s clean energy workers — and their families — should not be made to suffer in an effort to protect this legislation, which was passed through a process now mired in criminal investigations.”