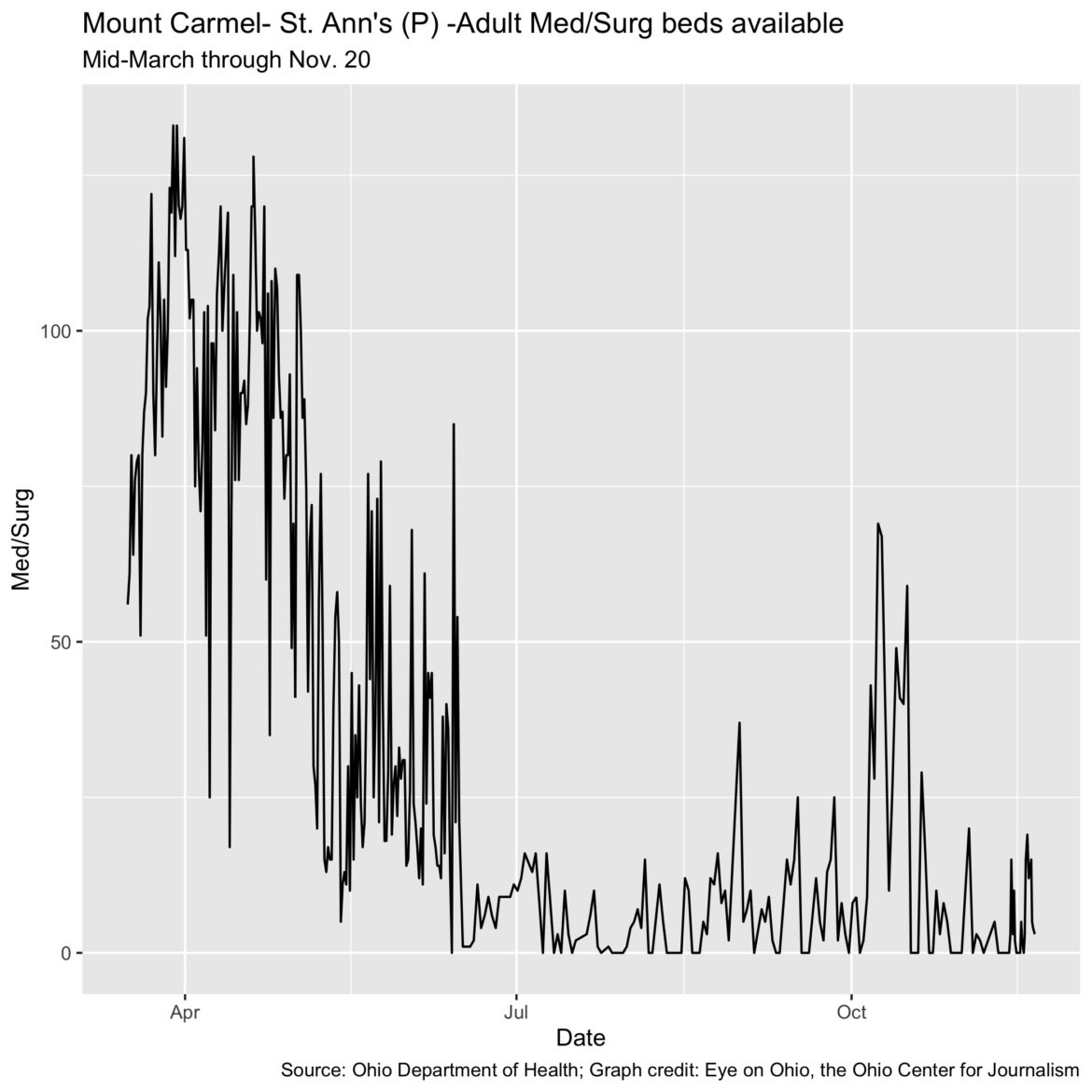 Ohio’s COVID-19 cases are surging for the third time, and social media channels have exploded with anecdotes describing how much space there is available at area hospitals. Some “undercover” videos show patients roaming empty wards. Other posts tell tearful stories by doctors and nurses exhausted from overwhelming demand.

After a seven month legal battle, the Ohio Court of Claims recently ordered the Ohio Department of Health to release to Eye on Ohio local information on the number of beds, ventilators, and other equipment available at local hospitals.

The data paints a complicated, constantly changing picture of Ohio’s efforts to “flatten the curve.” Some hospitals seem to be doing fine, while other hospitals seem to be constantly scrambling for open beds. The result is heavily dependent on where patients live, though overall the number of available staffed beds is shrinking.

“We are already at a very high level. We are already seeing our hospitals fill up,” said Governor Mike DeWine at a press conference on Tuesday.

Some hospitals have seen their available resources shrink, while others have remained relatively stable.  For example, despite having roughly the same population as Cleveland or Cincinnati, Columbus has seen far fewer beds available for hospitalized patients.

And rural areas with a relatively stable number of beds available have, on average, far fewer beds overall.

Dr. Matthew Colflesh at Trinity Health System in Steubenville, said that in the first two waves, his rural hospital didn’t see that many patients, just nine in the first wave and five in the second.

“My theme now is that things are different. We have reached a point in the past two weeks where the max number of hospitalizations in this hospital is 34,” he said.

One bright spot has been that personal protective equipment has, so far, remained relatively stable, though half of Ohio’s known coronavirus cases have been reported in just the past five weeks. Though not all hospitals report their equipment numbers.

On March 19, Ohio postponed all elective surgeries, causing a large spike in hospital beds available. On June 2, Ohio resumed other procedures. In early November, hospital officials announced they would start transferring patients to other systems to help even out patient loads.

The Ohio Department of Health released records of staffed hospital capacity to Eye on Ohio from March 16 through Nov. 24. Eye on Ohio has requested the most recent data, from after that date.

“As is true in areas across the state, our biggest capacity constraint is not in physical space, but in staffing availability, both of which we monitor daily,” said Lisa Henderson, Vice President of Health Initiatives at the Greater Dayton Area Hospital Association. “Our hospital leaders continue to work together to plan for what comes next, on behalf of our regional hospital community to ensure we can continue to care for the people in our region, whether that care is needed for COVID-19 or any other medical condition.”

In terms of hospital capacity, our hospitals are extremely busy,” said Dr. Bruce Vanderhoff, Chief Medical Officer of the Ohio Department of Health. “Any time you have a SINGLE diagnosis that is occupying 20, 30 percent of the beds in your hospital, you’re extremely busy. Because that’s unheard of.”

Explore the Data on Your Own

Sort by hospital to look for your local facility’s numbers

Note: Infectious isolation beds reflect the difference between airborne and droplet precautions: Initially, Covid-19 was thought to be spread primarily by "droplets" when patients cough, sneeze, sing or breathe. Most larger droplets are thought to float to the floor within 6 feet or so. Airborne Infection Isolation rooms are for diseases spread by "airborne" diseases when the concentration of pathogens that stays in the air is high enough to make someone else sick. Those rooms are recommended, but not always required, for COVID patients.