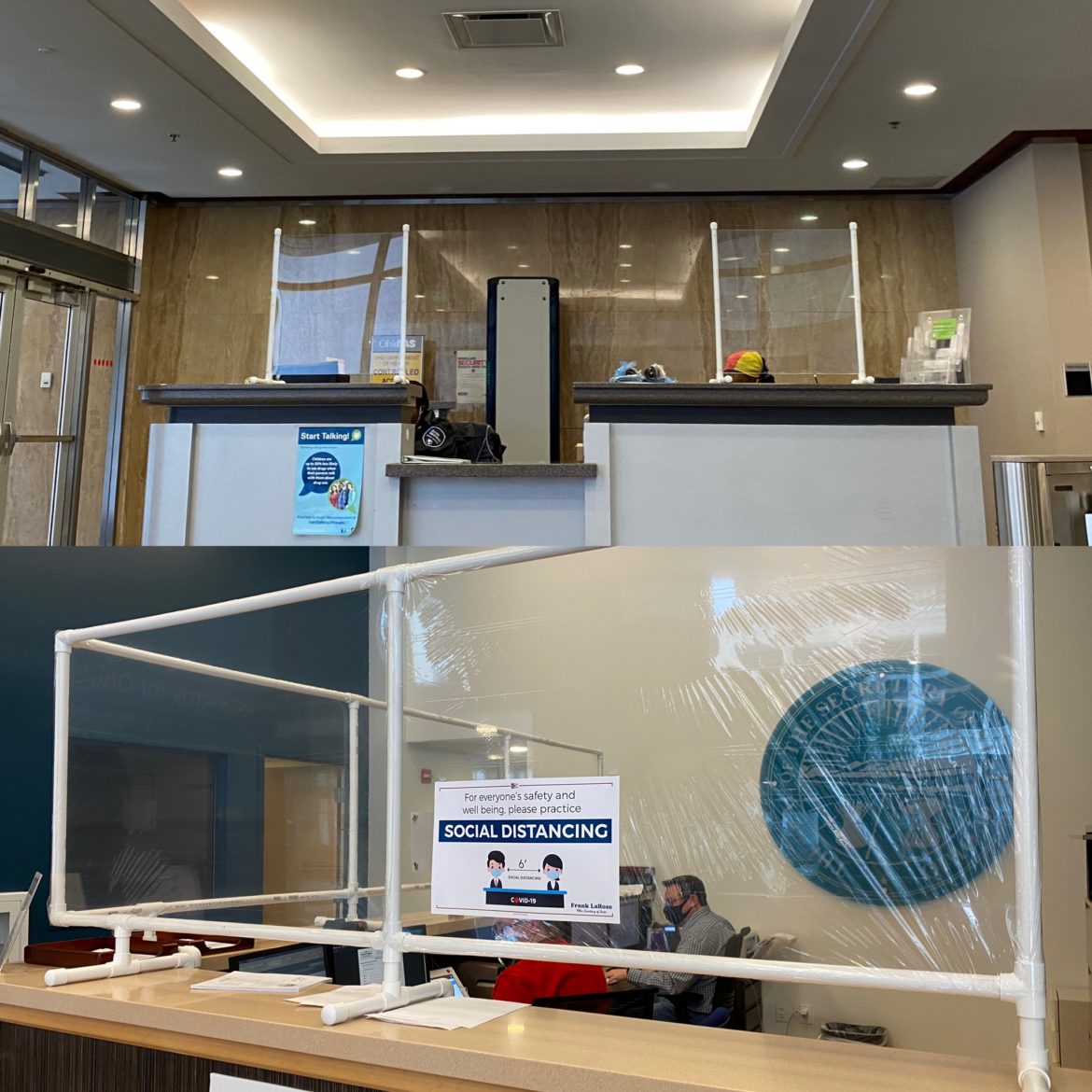 A tale of two agencies: below, the front counter at the Ohio Secretary of State's office has a three-foot high clear barrier to prevent workers from getting COVID. In contrast, the counter at the Ohio Department of Health's Chestnut Street office has just two small plexiglass squares. Most ODH employees now work from home, though the Bureau of Infectious Diseases still works in the building, and the building is shared with the Ohio Department of Veterans Services, whose employees work there every day. (Photo Credit: Eye on Ohio)

Despite an October 20 court order issued by the Ohio Court of Claims, the Ohio Department of Health still had not released complete records as of late Wednesday night, claiming they needed several days to release information from a database that is updated daily.

During Ohio Governor Mike DeWine’s November 17 press conference, Governor DeWine said that the information with the current number of beds, ventilators, and other medical equipment available for each Ohio hospital will be released on a daily basis.

“There is no reason why we can’t release that that I am aware of,” DeWine said. “And I’m not sure exactly sure how we are going to release it. But we should be able to get that out. This is all data that we are getting from the hospitals around the state.”

Eye on Ohio originally requested the data on March 19 and filed suit on April 29. Numerous delays by the Department of Health included late responses on four separate occasions. After briefings concluded, Special Master Jeff Clark ruled in Eye on Ohio’s favor on October 20. The Department did not object to the ruling within the time allowed by law. The Court of Claims adopted the Special Master’s recommendation on November 10.

Eye on Ohio made multiple requests for access or the records on November 12 and 13. Department of Health lawyer Socrates Tuch advised that the agency was preparing a data extract and would provide the information “on a rolling basis.” But he gave no date or time when the materials would be provided. When the materials still weren’t provided after additional calls, Eye on Ohio visited the Department of Health offices, only to be told by Tuch to stop going there.

Despite DeWine’s statement, Eye on Ohio has still not received the requested data.

Tuch told Eye on Ohio that the agency anticipated providing the requested data by Friday Nov 20, 2020. When pressed further for a prompt response without delay, Tuch declined to say he was working on the records. Contradicting his earlier email, Tuch  also implied that reporters would have to file a new request for the records every day.

Eye on Ohio received incomplete records via a Zip file at 6:03 p.m Wednesday. It is unclear why records are incomplete.

The records contain most bed capacity information from local hospitals from late March, but records abruptly end on October 30. At press time, it was not clear why. On that date, 33 hospitals reported zero beds available for adults either in the “Med/Surg” or “Critical Care” categories at some point during the day.

The data also contains a record of the number of ventilators available, but most other medical equipment numbers are missing. ODH said they had no data on staffing levels.

Ohio’s public records law and the court’s order call for state agencies to provide the public records, as opposed to edited summaries that might pick and choose which information is provided. For the records on the SurgeNet database, this could be done in multiple ways. The department could grant a login and password with limited access so Eye on Ohio could download the public records directly. The department could provide an Excel-compatible document with each day’s data for all hospitals via a ZIP file or online dropbox link. Or, the agency could provide screenshots with the requested records for each day.

At the November 17 press conference, DeWine stated that Coronavirus cases have been fluctuating between 7 and 8,000 cases for about a week now. Whereas 6 weeks ago, Ohio was only at 1,000 Coronavirus cases.

When a news story is as pressing as the COVID-19 pandemic, the scope of a reasonable time for producing public records can be as short as hours, versus weeks. The need for accurate, complete and up-to-date public records is more urgent now more than ever.

At the beginning of his press conference, DeWine said that on October 13, there were 1,000 people in Ohio hospitals who had Covid-19. Since then the number has only continued to rise.  As of Wednesday, there were 22,846 hospitalizations in Ohio.

Lieutenant Governor John Husted said more measures were needed  to try to stem the flow of the virus before it overwhelmed the health system.