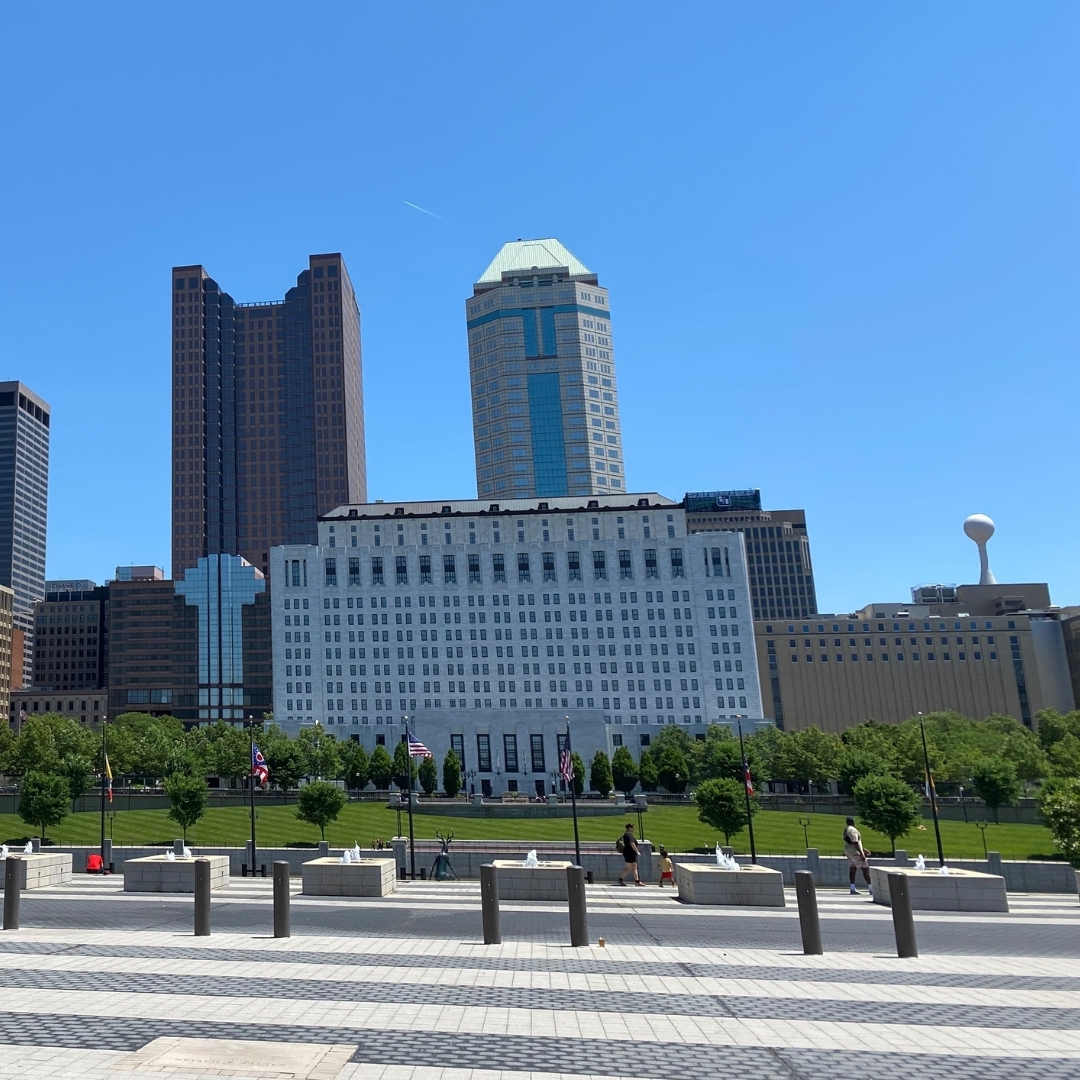 Several energy and utility questions are likely to come before the Ohio Supreme Court in the next two years, including cases involving coal plant subsidies, HB 6 corruption, and renewable energy project siting.

While much of the attention on this year’s races for the Ohio Supreme Court focuses on the state’s six-week abortion ban and gerrymandering, the election also comes with high stakes for state energy policy.

Several cases involving power plants, utility oversight, and clean energy development are likely to land before the state’s high court in the next two years. The seven elected judges will also review other rulings by the Public Utilities Commission of Ohio and the Ohio Power Siting Board, which determines where projects can be built.

Justice Sharon Kennedy, a Republican and the lone dissenting judge in August when the Supreme Court approved plans for the Great Lakes’ first offshore wind farm, is campaigning to become the court’s next chief justice. She is facing Justice Jennifer Brunner, a Democrat.

Here are six questions the winners are likely to help decide after the election:

1. What hurdles can neighbors or groups put up to block renewable energy?

The Supreme Court of Ohio’s rulings will be “really pivotal” in how renewable energy continues to develop in the state, said attorney Chris Tavenor at the Ohio Environmental Council.

One case where the group filed a friend-of-the-court brief deals with whether residents or groups can overrule a siting permit for the Emerson Creek wind farm in Erie and Huron counties. Objections to the permit aren’t based on evidence in the record, so the Ohio Power Siting Board properly rejected them, the environmental group argued. Oral argument hasn’t been scheduled yet.

The case bears some similarities to the 6-1 case in which the court let a pilot project for wind energy on Lake Erie move ahead. Brunner wrote the majority opinion. Kennedy wrote that the court should have given more deference to the appellants’ complaints.

2. What rules will govern siting for renewable energy?

The Ohio Power Siting Board is revising the rules on how it decides siting cases. Any challenges to the final rules would go before the state Supreme Court, Tavenor said.

The Ohio Environmental Council and others have called on the siting board to weigh climate change impacts in its decisions. Additional comments in the docket call for consistency in how the board defines the public interest. One issue is whether the board must weigh the evidence for or against complaints by members of the public, rather than just counting up how many people speak out for or against a project.

The weight given to comments was an issue last year when the board denied a permit for the Republic Wind project. Arguments raised by local groups and residents in that case were not backed up by evidence, the developer argued. Nor were dozens of people offering those comments subject to cross-examination at an evidentiary hearing.

3. Will ratepayers recover money for the alleged House Bill 6 corruption?

The Public Utilities Commission has halted action in four FirstEnergy cases linked to Ohio’s HB 6 corruption scandal for six months, after a federal prosecutor’s request to pause discovery during a federal investigation. All of the cases could eventually go up to the Ohio Supreme Court because of the money involved and the cases’ high profile.

In one case, the commission ordered FirstEnergy to show that it did not use ratepayer money to fund activities related to HB 6. Another case deals with whether FirstEnergy violated Ohio’s law requiring corporate separation between utilities and affiliated corporations. A 2021 audit noted multiple violations, as well as a chunk of missing documents.

A third case deals with how money was used from a no-strings-attached credit support rider that the Supreme Court of Ohio held unlawful in 2019. DeWine concurred in the judgment only. Fischer and Kennedy would have let FirstEnergy continue to collect the money.

Subsequent audits have found that FirstEnergy did not properly track roughly $456 million it collected from ratepayers from 2017 through 2019. Parties in the PUCO case have since asked the commission to impose penalties on FirstEnergy that could not only recover that amount, but triple it to about $1.4 billion.

The fourth case deals with a separate “delivery capital recovery” rider where an audit found millions of dollars had been improperly charged to ratepayers. The amount included payments to businesses run by Cleveland-area entrepreneur Tony George. More information about George came out in deposition testimony from Tracy Ashton, an assistant controller at FirstEnergy, in shareholder cases earlier this year.

4. Have ratepayers been overcharged for two 1950s-era coal plants?

Other Public Utilities Commission cases involve audits for coal plant subsidies that the commission allowed before HB 6. Issues include whether ratepayers should have to cover costs when the two plants owned by the Ohio Valley Electric Corporation ran full-tilt, even when it was uneconomic for them to do so, said Kim Bojko, an attorney representing the Ohio Manufacturers' Association Energy Group. The recovery of capital costs is also an issue.

With millions of dollars at stake, the outcome of the cases will likely be appealed to the Ohio Supreme Court. The stakes are even higher because Ohio lawmakers subsequently made the Ohio Valley coal plant subsidies part of state law when they enacted HB 6. Although lawmakers eliminated the nuclear plant subsidies last year, bills for a full repeal or for a repeal of the coal plant subsidies have stalled in the General Assembly.

5. How much more will Ohioans pay for utilities?

Similarly, Duke Energy Ohio filed a rate case with the PUCO earlier this year. Unless the parties can settle, that case and others would likely go to the Ohio Supreme Court in 2024. Expect other cases for rate increases and riders to come before the court as well.

A related issue is how much the Supreme Court of Ohio should defer to the PUCO when some, but not all parties settle. Settling parties in such cases often get side deals that work to their benefit, said Ned Hill, an economist at Ohio State University who spoke at the Ohio Manufacturers’ Association Energy Conference on Sept. 8.

Court rulings on redistricting also will affect energy policy by influencing the composition of the legislature. Gerrymandering in Ohio has already reduced accountability to voters. Dozens of lawmakers who backed HB 6 were reelected even after the scandal broke in 2020. Among them was former House Speaker Larry Householder, who was finally ousted from the Ohio House in June 2021.

Beyond questions of corruption, veto-proof majorities over the past decade have imposed additional hurdles to renewable energy development and limited steps to reduce fossil fuel emissions. One recent example is Senate Bill 52, which in 2021 imposed additional burdens on siting solar and wind projects that don’t apply to fossil fuel projects. Before that, HB 6 gutted Ohio’s energy efficiency and renewable energy standards.

Yet majorities in most Ohio counties favor a requirement that 20% of the state’s electricity come from renewable sources, data maps from the Yale Program on Climate Change Communication show. And majorities in all Ohio counties also favor regulating carbon dioxide as a pollutant.

Appellate judge candidates this year will have their party affiliations listed on the fall ballots for the first time — a change that was opposed by Common Cause Ohio, Ohio Fair Courts Alliance, Ohio State Bar Association and various other groups.

Beyond that, “following the money — looking at the money that’s going to the candidates for the Ohio Supreme Court can give you a picture of who these candidates are,” said Catherine Turcer, executive director of Common Cause Ohio. Endorsements also provide clues about how groups think candidates will act once in office, she said.

Money in judicial races also can create potential conflicts for judges, said attorney Douglas Keith at the Brennan Center. And judges often do a poor job of recognizing when they may have a bias on an issue, he added.

American Electric Power and NiSource, the parent company of Columbia Gas, have given amounts ranging from $2,500 to $5,500 to campaigns for Kennedy, Fischer and DeWine. Kennedy and DeWine also got $1,000 donations from the Ohio Coal PAC. The Ohio Oil & Gas Producers Fund gave $500 to Kennedy’s campaign.

Additionally, the FirstEnergy Corp. Political Action Committee had nearly $1.9 million on hand as of Aug. 31. Historically, the company has supported DeWine, Kennedy, and Fischer, according to Open Secrets’ FollowTheMoney.org data.

Beyond that, the Ohio Chamber of Commerce set a goal of raising $4 million for Ohio’s high court races, according to reports by CNN and the Columbus Dispatch. And the Republican State Leadership Committee is reserving $2 million for Ohio’s high court races, Cleveland.com reported. Neither the Chamber nor the Republican State Leadership Committee has responded to repeated requests for comment. Both groups have endorsed Kennedy, DeWine and Fischer.

Voters can expect a barrage of political ads in the final weeks before the election, Turcer said, and she warns voters to be skeptical. “If you can’t follow the money prior to casting a ballot, that transparency is happening too late,” she said.