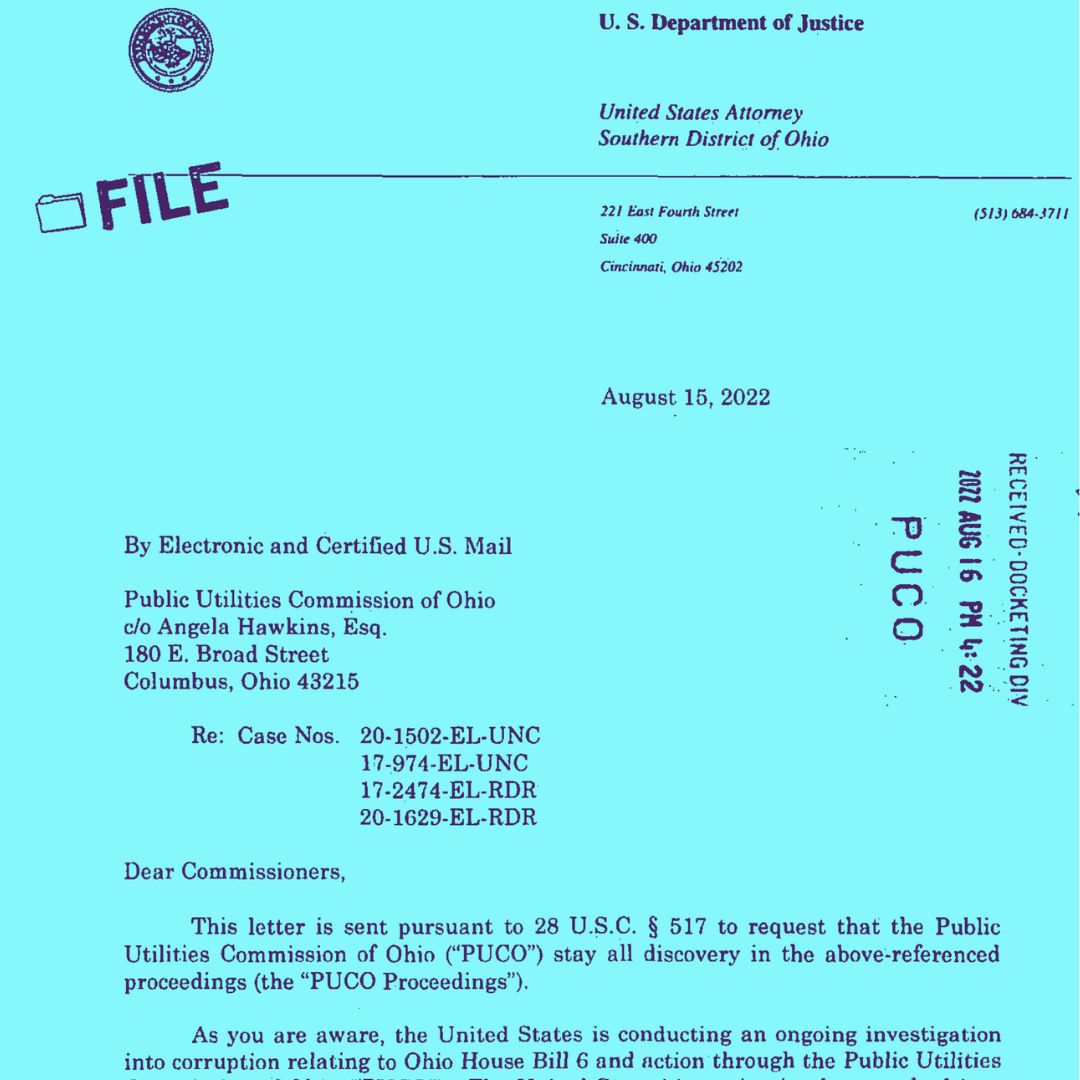 If granted, the request by U.S. Attorney Kenneth Parker of the Southern District of Ohio will further block Ohioans’ ability to learn more about the alleged corruption behind the state’s 2019 nuclear and coal bailout law.

FirstEnergy admitted last year that it paid nearly $60 million and bribed two Ohio public officials in connection with HB 6, including the former speaker of the Ohio House and a former head of the Public Utilities Commission of Ohio. Four piecemeal cases at the commission explore aspects of whether utility ratepayers footed the bill for that and other improper spending.

“For two years the consumers’ counsel has been battling to obtain truth and justice at the PUCO for customers of scandal-ridden FirstEnergy,” said Ohio consumers’ counsel spokesperson Merrilee Embs. “Now the Ohio public is facing potentially more unwelcome delay in getting answers.”

Parker’s letter to the Public Utilities Commission of Ohio resulted after FirstEnergy contacted the U.S. attorney’s office last month to object to the questioning of a former ethics and compliance officer of the company.

Stays are not unusual when a defendant in a civil proceeding faces charges in a criminal case. Stays are not guaranteed, however. One factor is whether the defendant’s Fifth Amendment right against self-incrimination will be compromised.

Neither Householder nor Borges is a party to the PUCO proceedings. Other individuals who have been indicted have pled guilty already, with the exception of lobbyist Neil Clark, who died of an apparent suicide in 2021. So far, federal authorities have not indicted other individuals. And the deferred prosecution agreement should resolve FirstEnergy’s liability as long as the company fulfills its obligations under the agreement.

The U.S. attorney’s office has not spelled out how questioning witnesses or other actions in the regulatory cases would interfere with the investigation against them. The office did not return a call and email seeking additional comment before press time.

FirstEnergy spokesperson Jennifer Young said the company had no comment.

The Office of the Ohio Consumers’ Counsel and others objected last month when hearing examiners at the PUCO halted a deposition, or questioning under oath, of a former FirstEnergy executive responsible for ethics and compliance. The hearing examiners made that ruling after FirstEnergy’s lawyers talked about a call to the U.S. attorney’s office, where a government lawyer had expressed concern about the questions. No other parties were on that call.

That ruling was “far reaching and devastating for the PUCO and [the objecting parties’] investigation of FirstEnergy Utilities and corporate separation violations,” the challengers wrote. Now the U.S. attorney wants the commission to halt all action in the cases for at least six months.

“This is a blunderbuss letter,” said former PUCO commissioner Ashley Brown, who was founding executive director of the Harvard Electricity Policy Group. “Some of this stuff I think probably doesn’t interfere with the investigation at all and should proceed.”

The PUCO’s cases deal with piecemeal questions that are relevant to HB 6, but don’t involve criminal charges. One case asks whether FirstEnergy can prove it didn’t use ratepayer money for charitable or political purposes. The company admitted last year that it used nonprofit corporations to influence the legislative process and “to conceal payments for the benefit of public officials and in return for official action.”

Other questions in the PUCO cases deal with whether FirstEnergy violated Ohio law requiring corporate separation between utilities and their parents and affiliates. Also at issue is how FirstEnergy and its utilities used money from specific riders, including one that the Ohio Supreme Court held unlawful even before HB 6 became law in 2019.

The request for a stay also might run counter to the deferred prosecution agreement itself, which says it doesn’t bind “any state or local law enforcement or regulatory agency.” At most, the agreement commits the U.S. attorney’s office to “bring the cooperation of FirstEnergy Corp. and its compliance with its obligations under this Agreement to the attention of any such authorities or agencies if requested to do so by FirstEnergy Corp.”

“It would be highly unusual for the U.S. attorney’s office to get involved in this way in a PUCO matter,” said attorney Miranda Leppla, who heads the environmental law clinic at Case Western Reserve University School of Law. “It certainly suggests the seriousness and extent of FirstEnergy’s interference with utility matters at the statehouse and PUCO.”

Even if there were reasons to think witness testimony in the regulatory cases would be a concern for federal prosecutors, Brown noted that the federal case has been pending for more than two years.

“The ongoing harm to the public completely pales in comparison” to a vague, unspecified claim of possible interference, Brown said. Proposed repeals of the coal plant subsidies have been stalled since last year, while full details surrounding HB 6 and its aftermath remain undisclosed.

Ohioans might not even be able to recover money that FirstEnergy spent unlawfully if current PUCO Chair Jenifer French sticks to a view she expressed during her confirmation hearing last year. She opined that the agency has little authority to refund overcharges.

Brown and others dispute that position, especially where fraud or corruption was involved. If it stands, however, Ohioans could be out many more millions of dollars as a result of HB 6 before the federal case is resolved.

The requested stays also would “give the [DeWine] administration a get-out-of-jail-free card ... because there won’t be any discovery of anything by the end of the election,” Brown said.

Among other things, documents recently filed with the PUCO by the Office of the Ohio Consumers’ Counsel suggest that both Ohio Gov. Mike DeWine and Lt. Gov. Jon Husted played a larger role than they had previously admitted in shaping HB 6. The administration is basically standing by its prior positions.

As matters stand, the PUCO cases would not have wrapped up before the November elections, where DeWine faces off against Democratic challenger Nan Whaley. A grant of the U.S. attorney’s request would prevent further information from coming out of the PUCO cases until next year.

The request for stays also raises questions about why FirstEnergy went to federal prosecutors to object to fact-finding at the PUCO. “What is it that they’re so interested in keeping from becoming public?” Brown asked.

Stays in the PUCO cases also could arguably hinder the federal prosecutors’ own ability to learn relevant information that might lead to additional criminal charges, Brown noted. In his view, “the only interests they’re protecting are the people who perpetrated the crimes.”

Whatever the PUCO ultimately decides on the requested stays or their duration, the situation “demands more investigation and oversight by the PUCO moving forward,” Leppla said. “Ohioans should not be subject to paying bills from state-approved monopolies who aren’t willing to abide by the rules and regulations that have allowed them to operate in the state.”