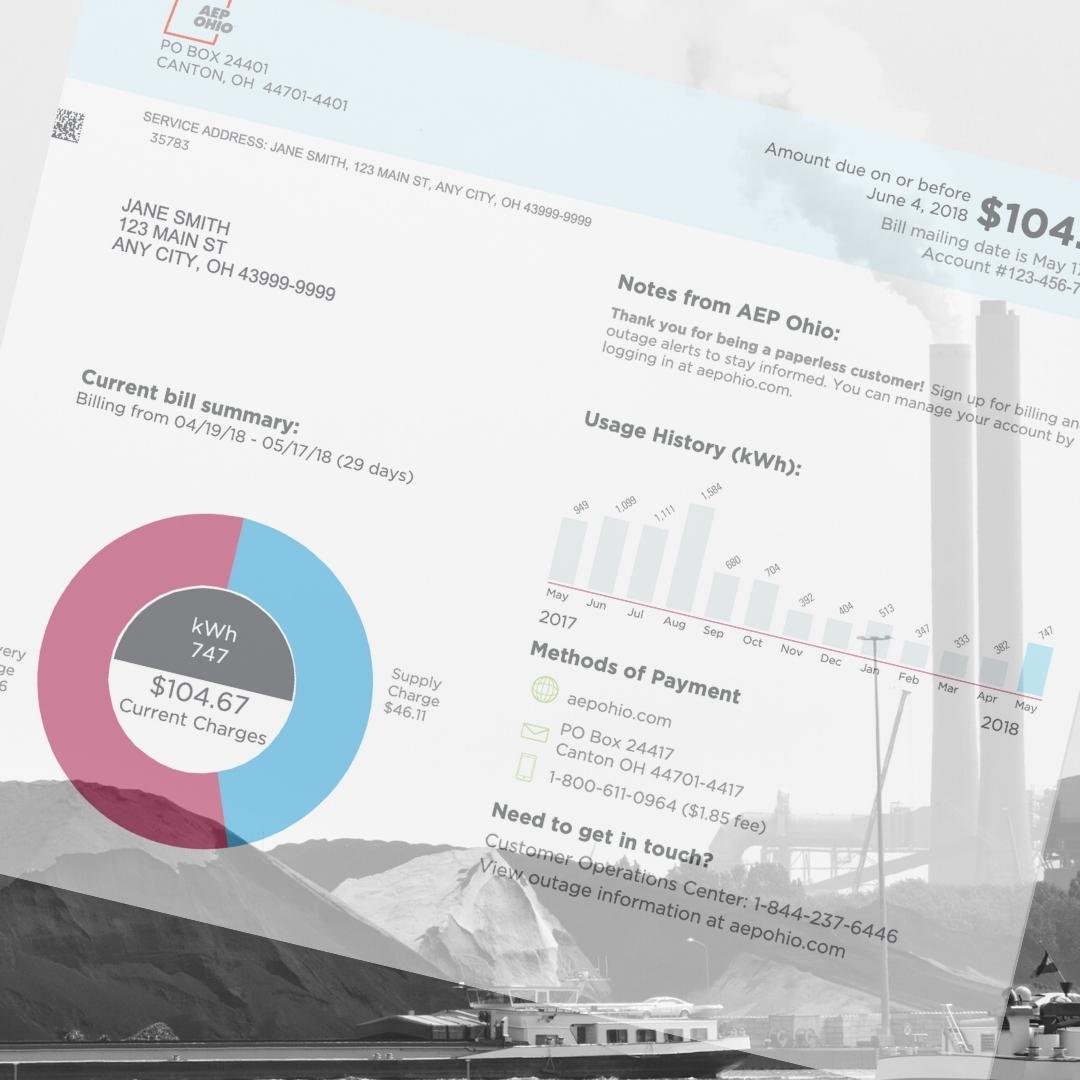 Ratepayers are getting tiny credits right now, but House Bill 6’s coal plant bailouts have huge net costs. And millions of dollars of those costs were improper, critics argue.

Although Ohio regulators have paused four FirstEnergy cases dealing with House Bill 6, they could still take action in cases dealing with the two 1950s-era coal plants that were subsidized by the law at the heart of Ohio’s ongoing corruption scandal.

Yet the Public Utilities Commission of Ohio has made no rulings in those cases in months. Meanwhile, bills to repeal the subsidies have been stalled in legislative committees since last year.

As a result, Ohio ratepayers remain on the hook through 2030 for hundreds of millions of dollars in costs for the plants.

For now, customers are getting credit for a few cents per month. Among other things, revenues from higher energy prices have let the plants recoup more of their costs than previously anticipated, so the utilities didn’t need to collect as much as they originally forecast.

But critics expect costs and ratepayer charges will rise next year for the plants run by the Ohio Valley Electric Corporation, or OVEC.

“Initially the subsidy was imposed by the PUCO. And now the subsidy is a state law courtesy of [the] infamous House Bill 6,” said Merrilee Embs, spokesperson for Ohio Consumers’ Counsel Bruce Weston. “The PUCO’s subsidy is still under dispute by OCC and others and is awaiting a PUCO ruling.”

Cases for 2018 and 2019 could determine whether utilities must credit ratepayers for millions of dollars of past overcharges under PUCO orders before HB 6, as well as how much the utilities can continue to charge ratepayers in the future.

A separate case deals with the charges for 2020 under HB 6. The PUCO has not taken action in that case since last year.

“I cannot speculate on when or how the commission will decide future cases,” said PUCO spokesperson Brittany Waugaman.

Pennies of rebates vs. millions in costs

The PUCO and utilities have described the coal plant charges as a hedge against volatile energy prices. However, coal-fired power plants are generally less competitive than plants that run on natural gas. And costs for renewable energy have fallen dramatically over the past decade.

“In an inflationary environment like we’re in, our customers receive 11 cents a month credit,” Reitter said, adding that the credit could rise to $1 per month next year.

But those credits result from bill adjustments, worksheets obtained from the PUCO suggest. Estimates are made every six months for what utilities expect to pay to cover their share of OVEC’s costs that exceed its revenues. Adjustments are made if amounts were over- or under-collected during the prior period.

Higher costs for natural gas drove electricity prices higher, so the OVEC plants were able to get more revenue. But it appears that companies thought they’d need more from ratepayers to make up for a shortfall between revenues from power sales and their share of the OVEC plants’ costs.

Fielding questions for OVEC executive Justin Cooper, AEP spokesperson Scott Blake said efficiency improvements have been made at the OVEC plants. He also noted the overall rise in energy prices over the past year. “Global energy demand and prices continue to be a force behind the market,” he said.

Neil Waggoner, senior representative for the Sierra Club’s Beyond Coal campaign in Ohio, is not convinced that the recent natural gas price volatility is an argument for coal plant subsidies.

“If your hedge requires the complete destruction of the international order, I’m not sure if that’s a hedge, other than dumb luck,” Waggoner said.

Neither the OVEC charges nor any credits are separately broken out on consumers’ bills. Despite the small rebates right now, the OVEC plants are still a net cost to ratepayers. The $7 million credited to ratepayers during the second half of this year is small compared to the roughly  $181 million the consumers’ counsel estimates they have paid since January 2020.

“It’s still a ridiculous cost to customers versus the savings,” Waggoner said. “And it’s still projected long term to be a loss.”

Meanwhile, since 2020 the plants have emitted almost 29 million tons of greenhouse gases that drive climate change, plus millions of tons of sulfur dioxide and nitrous oxide pollution.

Both OVEC plants began operating in 1955, and OVEC’s shareholders are utility companies in Ohio and elsewhere. The plants were originally meant to guarantee power for uranium enrichment operations at Piketon. The Department of Energy cancelled that arrangement nearly 20 years ago. By 2010 the boom in fracked natural gas made competition harder for older coal-fired power plants. Yet utilities agreed in 2011 to keep OVEC going until 2040.

American Electric Power began pushing to recoup its share of OVEC costs from ratepayers in 2013. Other utilities followed its lead. In 2015, regulators found the benefits of the plant bailouts didn’t justify their costs. Then they reversed course and allowed subsidies for American Electric Power, Duke Energy and Dayton Power & Light (now AES Ohio) as a hedge to stabilize prices.

The Ohio Supreme Court ruling upheld those subsidies in late 2018. Lawmakers passed HB 6 in 2019, requiring all regulated utility customers to pay subsidies through 2030. By then, the plants will be 75 years old.

“The way this bailout has been structured is that no matter what … utilities are going to be profitable,” Waggoner said.

The Office of the Ohio Consumers’ Counsel has argued that ratepayers should get refunds or credits for the OVEC plant costs for 2018 and 2019 because PUCO staff asked an independent auditor to change its recommendation that “keeping the plants running does not seem to be in the best interest of the ratepayers.” The PUCO also erred by not allowing testimony from the auditor and others about that and other key points, the consumers’ counsel argued.

The audits for 2018 and 2019 were supposed to determine whether plant costs were prudently incurred and in customers’ best interests. HB 6 says “prudently incurred costs” can be recovered, but the language isn’t clear about what OVEC must do beyond spending money. Courts generally aim to give meaning to every word in a statute, and the cases for 2018 and 2019 will likely impact what happens under HB 6.

“It was imprudent to operate the OVEC units on a ‘must run’ basis,” consumers’ counsel lawyers said in their brief. Good utility practice would have been a daily financial analysis of projected costs and revenues before committing the plants to run. And the auditor didn’t do the work to make that determination, they wrote.

The plants “should only run when it’s economically feasible,” said Kimberly Bojko, an attorney representing the Ohio Manufacturers’ Association Energy Group. The plants did that for a short time early in the COVID-19 pandemic. “So why can’t it work in other years?” Bojko said.

London Economics, the auditor contracted by the PUCO to review the 2020 charges, supported that move and recommended an ongoing change so the plants could operate with more flexibility and save money where feasible.

Another objection in past years was that the Clifty Creek plant in Indiana overpaid millions of dollars for coal when it could have paid less for the same quality of fuel. Emails show the auditor also asked a question about the coal purchases.

So, ratepayers may be owed millions for the time when OVEC overpaid for coal. Also, since mid-2020, global coal prices have risen dramatically. As a result, the plants will likely pay much more for fuel when their current contracts run out.

AEP spokesperson Blake would not say who the new supplier would be or what the price for coal would be then. “As a competitive power generator, we do not reveal our fuel pricing or other contractual information.”

Challengers have also argued that ratepayers should not have to pay for utilities’ shares of the OVEC plants’ debts. Aside from questions about past costs, the issue could affect whether utilities can recover costs to comply with U.S. Environmental Protection Agency rules for coal ash ponds. If the plants can’t comply, they will have to close, said Waggoner at the Sierra Club. And closure would cost money, too.

An EPA proposed ruling last winter would deny a request to extend the deadline for OVEC’s Clifty Creek plant to comply. Blake said OVEC provided additional information to the EPA to support the company’s view that its plan complies with the rules. A final determination hasn’t been received, Blake said. The company also hasn’t gotten an initial determination on its application for the Kyger Creek plant, which must also obey the rules, he said.

“In the case of both plants, OVEC is doing the work necessary to comply with the rules and maintain operations at the facilities,” Blake said. If more work is necessary, “we will work with EPA to ensure that it can be completed within their timelines,” he added.

Cases on AEP’s charges for the 2018 and 2019 OVEC costs have been fully briefed since spring. Briefing wrapped up in the Duke Energy Ohio case on the OVEC costs in August. The PUCO still has not issued its ruling in either case.

The PUCO also opened a case for the 2020 OVEC charges under HB 6. Auditor reports were filed for utilities last December. The commission has not yet set a hearing schedule or ruled on issues about pre-hearing fact finding.

Although adjustments can be made to future bills, regulators’ delays are causing customers to lose out on the time value of their money, Bojko noted. In other words, companies could be using or investing that money now.

Meanwhile, if critics are right, customers will soon be shelling out more money for the old coal plants. And rulings in the cases could affect how much customers continue to have to pay. In light of that, the commissioners should make ruling on cost issues a priority, said Miranda Leppla, head of the environmental law clinic at Case Western Reserve University School of Law.

“We’re in the middle of inflation, and getting these trued up as fast as possible so people are only paying what they should be is critical,” Leppla said. The amount per bill may still be small, depending on what charges are disallowed. But the total could add up to millions of dollars.

“To protect consumers, we are supporting SB 117 and HB 351 to repeal the utility subsidy from the tainted law,” said Embs at the consumers’ counsel’s office. “But progress has been slow.” Thosebills have not moved ahead since last fall. OVEC, American Electric Power, Duke Energy and AES Ohio have all opposed repealing the coal plant charges.

As Ohio regulators sit on coal plant subsidy cases, costs could rack up for ratepayers