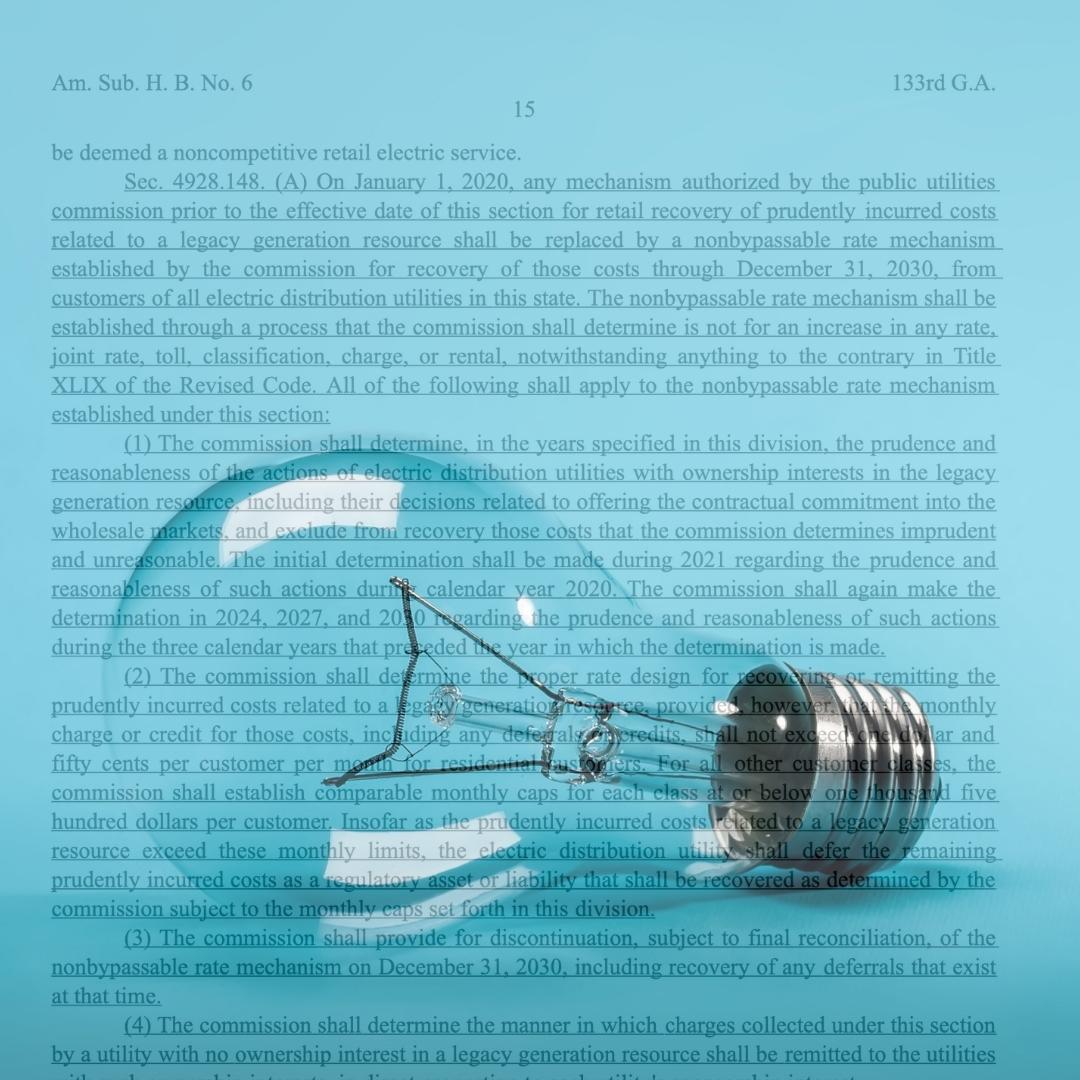 The biggest corruption scandal in Ohio’s history happened right under people’s noses, and much of the law at its center remains on the books.

This story originated from the Energy News Network and Eye on Ohio and is part of ‘Climate & Democracy,’ a series from the global journalism collaboration Covering Climate Now.

It has been three years since Ohio lawmakers first introduced the power plant bailout legislation that is now at the heart of the largest corruption case in state history.

Since House Bill 6 passed in 2019, an FBI investigation has revealed a $60 million bribery scheme, leading to extensive admissions by FirstEnergy — a utility company central to the scandal — and guilty pleas from three defendants in a federal criminal case.

Beyond that, though, accountability has been slow to come, and HB 6, which also gutted the state’s clean energy standards, remains on the books.

Just as the Intergovernmental Panel on Climate Change’s latest report notes how vested interests have blocked progress on climate change mitigation, the HB 6 scandal shows how utility, fossil fuel and nuclear interests have framed Ohio energy policy, even when that policy conflicts with voter preferences on renewable energy.

“In Ohio, in the wake of HB 6, we’re seeing just how tied together energy issues are with the state of our democracy,” said Neil Waggoner, Ohio senior campaign representative for the Sierra Club’s Beyond Coal campaign.

Even after the corruption was exposed in 2020, the state’s elected leaders didn’t fully investigate and fix the problem, Waggoner continued. Instead, key people involved in HB 6 stayed in office. House Speaker Larry Householder, who was arrested by the FBI in July 2020, won re-election and remained in office until June 2021. In fact, all 45 lawmakers who backed HB 6 and were up for election in November 2020 won their races.

“They dug in and fought to maintain the status quo,” Waggoner said.

“That’s all part of this broader question of why is it that we give outsized influence to special interests in our politics,” said Matthew Hodgetts, an expert on environmental politics at Case Western Reserve University in Cleveland. A small number of very wealthy individuals and corporations “have basically monopolized climate policy for generations now.”

And, he adds, “they are very open about what they are doing.”

Ohio is a major energy producer and significant source of emissions, with a carbon footprint comparable to countries like Spain or the United Arab Emirates.

As of 2020, Ohio, with the seventh largest population, used the fourth largest amount of electricity among all the states. Roughly 81% of Ohio’s net electricity generation comes from fossil fuels.

After a 2008 law set the stage for a competitive market, reported campaign contributions from utility, nuclear and coal interests jumped substantially. FirstEnergy gave more than $560,000 in 2010 and nearly $785,000 in 2012. Combined giving from the utility, coal and nuclear industries exceeded $3.3 million in 2018.

FirstEnergy and others who gave to dark money groups stood to gain a lot from HB 6. The law earmarked about $1 billion in statewide ratepayer subsidies for two former FirstEnergy nuclear plants over the course of six years. HB 6 also codified subsidies for two 1950s-era coal plants owned by other companies. Those subsidies have cost roughly $240 million since 2020 began, while adding approximately 23 million tons of greenhouse gases to the air.

Householder, the former House Speaker, faces a trial on criminal charges next year, along with lobbyist Matt Borges, who previously chaired the Ohio Republican Party. Two other individuals and the dark money group Generation Now filed guilty pleas. Another co-defendant, lobbyist Neil Clark, died of an apparent suicide last year after writing a tell-all book that, among other things, claims Ohio Gov. Mike DeWine received a $5 million bribe from FirstEnergy.

FirstEnergy has also implicated the former chair of the Public Utilities Commission of Ohio, Sam Randazzo. DeWine was apparently told that Randazzo had close ties to FirstEnergy before the appointment in early 2019. Randazzo’s anti-renewable stance was well known.

Randazzo denied wrongdoing but resigned in November 2020, days after FBI agents searched his home. Before then, Randazzo helped shape HB 6. And he steered the PUCO’s actions on calls for repeal and a full regulatory investigation.

The crimes alleged in the HB 6 scandal focus on bribery, money laundering and conspiracy by public officials and others as part of a corrupt racketeering enterprise.

Spending lots of money in politics is not itself a crime. Under Citizens United, corporations can spend almost unlimited amounts on political issues or advocacy, as long as the spending isn’t coordinated with a candidate’s campaign.

Yet the line between what’s coordinated and what’s not can get blurry. Money can go through multiple organizations before it’s spent for ads or other activities. And there’s limited, if any, reporting on the financial backers of different groups. Any reporting that does happen often comes more than a year after elections.

These circumstances make it nearly impossible for voters to be fully informed about which business interests are pushing different agendas. There’s also little accountability for many misleading political ads. Ads to thwart a referendum on HB 6 touted a bogus Chinese conspiracy, for example.

Common Cause Ohio, the Brennan Center for Justice, and Voters’ Right to Know have advocated for legislative fixes. For example, any group’s “independent” ad might be required to identify the group’s top three financial backers as an ad airs or is sent out. That could help somewhat, but would still require detective work if the backers themselves are other dark money groups.

“Nobody knows where that money is coming from. So there’s a lack of accountability,” said Ohio Rep. Juanita Brent, D-Cleveland Heights.

And lobbyists for companies and others that fund dark money groups often want to stay in the shadows.

“FirstEnergy Corp. used the 501(c)(4) corporate form as a mechanism to conceal payments for the benefit of public officials and in return for official action,” a company statement admitted in July 2021.

Many politicians also have little incentive to require detailed reporting on dark money.

“You’re not going to hold the purse strings accountable because you’re dependent on the money,” said Ashley Brown, a former PUCO commissioner who headed the Harvard Electricity Policy Group.

If enough people are dissatisfied with elected representatives, they can theoretically vote them out of office. But gerrymandering has effectively ensured one-party rule in Ohio’s legislature, making it difficult for voters to hold politicians accountable for unpopular policy actions.

“It’s believed that they can get away with it, because they’re so secure in those districts,” said Ohio Sen. Nickie Antonio, D-Lakewood. Since 2013, Republicans have enjoyed supermajorities in both houses of the General Assembly, while also holding the governor’s office.

In statewide elections over the past decade, roughly 54% of Ohioans have voted Republican, compared to 46% Democrat. Yet mapmaking practices such as “cracking” and “packing” have given Republicans veto-proof majorities of nearly 76% in the Ohio Senate and about 64% in the Ohio House.

Ballot measures in 2015 and 2018 amended the state constitution to set up a redistricting commission. The goal was to use a transparent process to reflect statewide voter preferences without undue advantages for either party.

Yet so far the Ohio Supreme Court has four times rejected the GOP-dominated redistricting commission’s maps for the Ohio General Assembly. April filings by commission members argue they should not be held in contempt for a last-minute switcheroo of slightly tweaked versions of the earlier unconstitutional maps for ones developed by independent mapmakers.

It’s unclear what will happen with Ohio’s gerrymandering crisis. For now, bills for a complete repeal of HB 6 remain stalled at the Ohio legislature. And although the nuclear subsidies are gone, proposed repeals of nearly $288,000 per day for coal plant subsidies have stalled since October. AEP Ohio, Duke Energy, AES Ohio and the Ohio Valley Electric Corporation all testified against both bills. One of the two subsidized 1950s-era plants isn’t even in Ohio.

“We are watching democratic erosion unfold,” said Hodgetts at Case Western. “And yet we seem helpless to stop it. … At the end of the day we ended up at a place where the politics is really not driven by the people.”

Click here to subscribe to Eye on Utilities, providing periodic updates on Ohio utility news in the wake of the HB 6 corruption scandal.